What is Swing Trading?

Swing trading is a strategy that requires close attention to both charts and fundamental news flows. It is popular with those who like a “hands on approach”. It works by trading on the recurring movements or swings that happen in currency markets.

Swing trading doesn’t have to use a particular timeframe, even though some people define it as a trading system that holds position for less than one week. Swings happen at all timeframes so it is more logical to define it as a system that enters and exits the market during any kind of price waves. 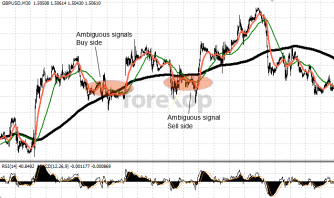 Swing Trading Into the Trend

Most swing strategies trade in the direction of the strongest trend. With this strategy the trader aims to enter long on rising momentum and enter short on falling momentum. They aim to time their entries to coincide with the market’s ebb and flow, buying into troughs and selling into peaks.

In a momentum based trading system, the swing trader will only trade in the direction of the main trend. They would not hold a short position against an upward trend. Similarly, they would not go long in a prevailing downward trend.

This is more logical because there is less chance of being “wrong sided” when a short-term trend changes direction.

Swing Trading Against the Trend

Some compare swing trading against the trend to picking pennies off a busy highway. Because it involves moving against the tide of the market, this approach runs a higher risk of failure.

The aim of the trading style is to work on the upswings that take place counter-to the main trend. That is, in an uptrend, the swing trader will enter the market as the price drops through a short-term correction. In a downtrend, the strategy will enter long into the short-term upswings.

So why use this method when it seems prone to failure? The attraction for those using this technique is that corrective swings against the main trend can be more powerful and rapid than swings into the trend.

There is also the bonus of potentially catching an explosive breakout that takes place when the main trend changes course. In these events, the price can move percentage points within a short space of time. In reality, many reverse swing traders miss-out on these moves because they close positions as soon as there’s a modest profit.

In all trading, good timing is essential to profitability. Swing trading is no different. With each swing, the amount of profit captured is relatively small. A swing trader might target around 20 pips on each swing. With lower amounts, the spread and fees can take out a high percentage of the profits.

This makes swing trading a system that relies on skillful use of charting tools, combined with a sound fundamental viewpoint.

Several technical indicators are helpful for swing trading. The most basic – preferred by many – are a combination of moving average lines and support/resistance levels.

To use this system first plot three moving averages on the chart.

Because three moving averages are used, traders sometimes call this a Triple SMA system (triple simple moving average) or a crossover system. Some use other averages such as the exponential or the weighted.

The system is as follows:

The entries as set by crossover of the fast and slow line. With momentum swings, the system trades in the general direction of the trend.

This makes certain that when a trend is rising the strategy is long, and when falling it is short.

A value based strategy does the opposite to the above. That is, it buys when the price is below the trend line and sells when above. The belief is that the price will revert to the mean over time.

When above the main trend line it must be overvalued and the price should fall. Conversely, when the price is below the trend line the currency pair is undervalued and should rise back towards the mean.

Figure 1 shows the momentum strategy in action. Here there are three moving average lines shown on the chart.

An extra confirmation happens when the closing of the next bar does in fact re-establish the crossover. 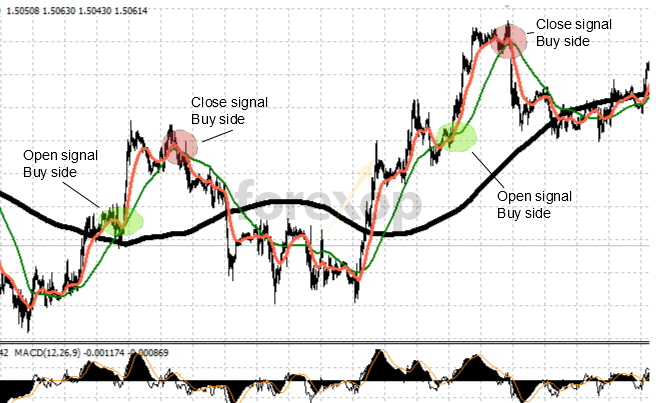 Figure 2 below shows the same action, in reverse. That is trading a downward trend. 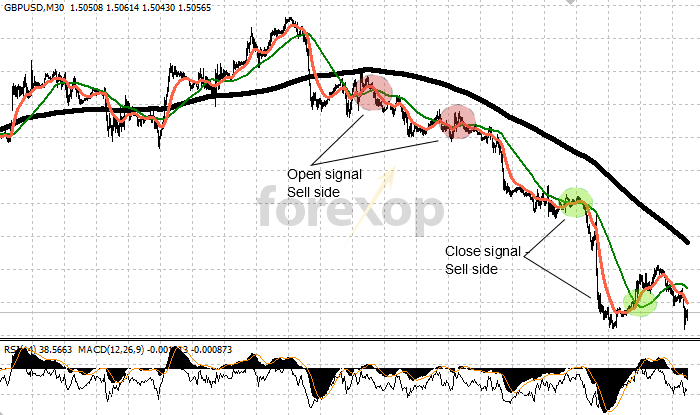 When using chart strategies like this is the price action itself is important. Complex indicators can sometimes detract from the basics of examining price movements, support and resistance levels or in analyzing other related markets.

Using basic support and resistance lines should improve your success rate. This will help you to determine where price levels are likely to “stick” and encounter an impasse. This can be useful in deciding where to placing stops or even when to avoid the trade altogether.

As with any technical strategy, swing traders have to learn to deal with false signals. Moving averages tend to create a lot of noise and this will generate false entry and exit points from time to time. A failure rate of around 20-30% is the norm.

Figure 3 below shows some typical examples of false signals.

The first area shows a set of “noisy” false buy signals. The fast line moves up through the slow line but the price immediately reverses and pulls back towards the trend. On falling back, the price rises again and creates a second false signal. Staying out of the trade when the price is moving closely down to (or up towards) the trend line is one way to avoid this.

The second example shows two potentially ambiguous sell signals. The fast line moves above the slow briefly and then falls to create a false signal. The price however changes direction and moves higher, back above the trend line. Again, avoiding entries when the price is close to the trend line can overcome these kinds of false starts. 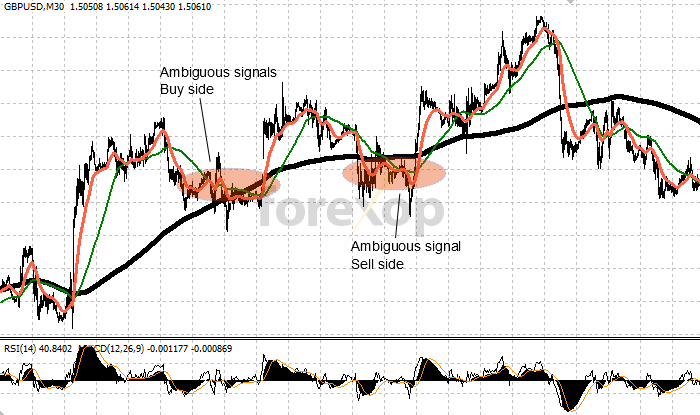 While some swing traders use purely technical systems, the more successful ones are those who use a fundamental overlay.

One of the skills a swing trader needs to learn is when and if the sentiment or fundamentals have changed. Trend reversals normally do not happen without good reason. Major trends turn either:

Also, don’t suppose that the market will turn immediately on a new piece of economic data. Sometimes it can take time to assimilate and for the trend to reverse. These present good opportunities.

Profitable swing traders use economic fundamentals as the backstop to their strategy and this helps them anticipate trend behaviors.

For example, an upside breakout is far more likely when the central bank has increased its growth forecasts, or when its interest rate policy is revised upwards. Similarly, a downside break is more likely after a downbeat economic forecast.

Swing Trading Versus Buy and Hold

There have been studies comparing the performance of swing traders with buy and hold traders. Some suggest that over the long haul, few swing traders – & other kinds of in/out traders, will outperform a simple buy and hold system.

They do however point to the fact that a small minority of traders are able to buck the trend and turn a profit over the year even after adding in trading fees. Whether these are just outliers, who’ll return to below average returns over time is not known.

Buy and hold traders claim that the most profitable way to capitalize on any trend is to simply enter early and hold your position until the trend slows or reverses. Less trade volume also avoids mounting trading costs.

The risk to the swing trader is that by dipping in and out of the market they can miss the big moves.

Which system you choose is a matter of choice.