Home Trading
Serious bear markets do not come about that often. When they do, they create some once in a lifetime trading opportunities if you are tuned in and aware of history and market cycles. Knowing where opportunities are most likely to arise is essential to surviving and profiting from market turmoil.

While each bear market has different causes and dynamics, they share many similarities. By comparing major bear markets over the past one hundred years, we can see that the average drawdown, before the bull market reversal took place is about 51% and the average duration is about 18 months.

The longest bear market was the 1929 crash and the shortest was the crash of ’87.

The bear market we are in now started in February 2020 and we have seen roughly a 38% decline in the Dow in a little over four weeks. This is severe by any historical precedents. Even though we have retraced some of those losses, many believe there is more pain to come. That means if this bear market follows a typical pattern, we could see the Dow bottom at around 14,500.

If it follows the worst trajectory, akin to 1929, that would put the bottom at around 3245 points.

While these are just historical trends, they do give some ideas about where we might be heading.

On a historical basis, the faster the drop in the market, the quicker was the recovery. 1987 for example saw a very rapid drop but the recovery started just 5 months in. Unlike bear markets prior to 2007, in this one we are seeing massive amounts of stimulus from central banks around the world in an effort to keep the system afloat. 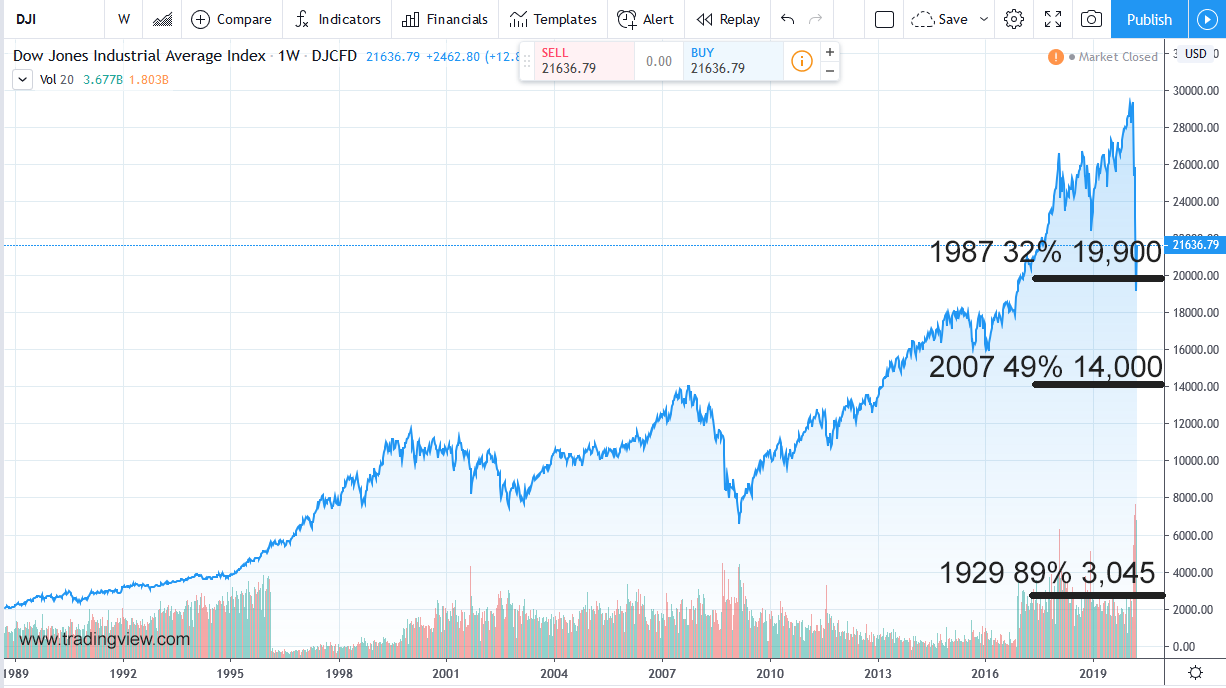 How to Profit in a Bear Market

Profiting in a bear market depends on whether you are seeking value or want to trade the volatility. The swings in bear markets can be extremely powerful. If you have strong nerves, and are good at timing your entry and exit, this can be a way to make tremendous profits very quickly.

If you are a value kind of investor, sitting in cash can make a lot of sense during a severe bear market. That does assume you exited before the major part of the downward correction to preserve as much of your equity as possible.

Those investors burned on the way down, are often reluctant to buy when the market reaches significantly lower prices even though the risk reward is much more favorable at those levels.

Having at least some spare cash in your portfolio is crucial. This is especially important if we get into a deflationary debt crunch. Being liquid allows you to pick up value stocks and other assets at deeply discounted prices.

This is not completely without risk though because, it requires picking companies or assets that will rebound strongly in the following upturn. Many will not survive.

One classic feature of bear markets is strong bullish retracements known as bull traps. In bull traps, people jump back into the market thinking the worst is over only to find the rally soon fizzles out and they are soon deeply in the red.

For traders, bull traps are an excellent way to profit from major market swings. Knowing and understanding the technical reversal and continuation patterns is a major advantage at these times.

Bull traps can retrace as much as 50% of the last drop before fading out and trapping those who have entered long. On the other side of the coin, bull traps can be a good way for people who are still long the market to exit at a better level.

Bull traps will start with an extremely powerful rebound, of 5-10% in a single day on the major indices, but usually much more on specific stocks.

Stocks and big indices generally grab the headline but there are major upheavals afoot in the currency and bond markets too.

In a bear market, the safe haven currencies see big money inflows. Safe haven currencies are those with low debt, as well as stable political and monetary policy. The Swiss franc tops this list, but another favorite is the Japanese yen. Both the euro and US dollar have had big rises as people liquidate their portfolios and rush to cash.

These trends are usually technical and short-lived as investors reallocate their cash positions to better performing assets.

This crash has been typical in the precious metal market as gold and silver saw a big sell off in the early phases. This happened both in ’87 and 2007 where margin calls and unwinding of speculative positions created a lot of selling pressure. Any liquid asset is sold down in the rush to cash and metals are no exception. Silver, having an industrial component saw a bigger retracement than gold.

The cryptocurrency space has not escaped the market chaos. We have seen extremely high volatility there with Bitcoin and Ethereum both dropping by more than major stock indices. This is the first real test of cryptocurrencies in a major market correction and we are watching the space carefully to see how this asset class performs under stress. If Bitcoin, Ethereum and others hold up reasonably well that bodes well for the argument that at least some cryptos are a long term store of value.

The bitcoin halving is in May 2020. This is where the supply of new coins from miners cuts in half per the schedule. Earlier halving events were in bull markets so the dynamics will be slightly different.