For most investors most of the time, gold is just another currency. But in times of turmoil, gold takes on another meaning. It is an asset that is a store of value when prices of other assets are collapsing. It is also a reliable source of liquidity. People have always wanted gold and there’s no evidence that is going to change in the near term. 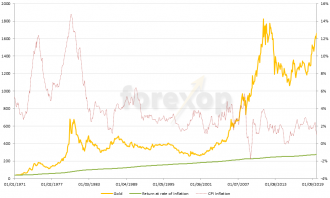 So what is gold’s price action telling us about the current state of affairs?

Gold is quietly making new highs in most fiat currencies

While most financial markets have been faltering and experiencing record high volatility, gold has been quietly trending higher against nearly all major fiat currencies as the table below shows.

The noteworthy exception of course is the US dollar. Gold priced in US dollars hasn’t yet surpassed the 2011 high. If other currencies are anything to go by, that could happen fairly soon.

When priced in US dollars, gold is certainly lagging. The reason for this is technical. Brutal bear markets, and periods of high volatility always have a habit of bringing temporary dollar strength. For one, the US dollar is the world’s reserve currency. Lots of holdings are denominated in dollars and when those holdings are liquidated, they are converted back to dollars from their local currency.  This puts upwards pressure on the dollar.

Additionally central banks around the world are busy quantitative easing, inflating away their money supply. The US captures a disproportionate amount of that relative to other currencies through foreign investors buying US denominated assets. This is the dollar milkshake theory.

US treasuries and other sovereign debt is another traditional safe haven asset. But with yields on most sovereign bonds well below inflation, and with rampant money printing unfolding, many investors will be looking at the data and coming to the conclusion that the risks are far higher than the rewards. This could make central banks the buyers of last resort, and in the end the only buyers of their own government’s debt.

Why invest in something that returns less than one percent when real inflation could be in double digits?

The yield on US 10-year treasuries is 0.73% – that’s its lowest in more than 60 years.  The fact that you are getting a miserable 0.73% coupon income becomes irrelevant if you’re losing 10% of your principal each year through inflation or loss of purchasing power.

On the corporate site, the spread between corporate bonds and treasuries has spiked to levels not seen since the 2008 financial crisis. This suggests real investors are extremely risk averse.

These are anything but natural markets. Who knows where the real yields would be without central bank intervention.

The upshot of this is that a deluge of US dollars, and indeed other fiat currencies will be searching for a more reliable store of value than government and perhaps corporate debt in the not too distant future.

A recipient of some of these flows could of course be precious metals, and especially gold. Given the small size of the precious metals markets, even a small allocation from traditional assets could easily drive prices much higher.

Gold has proven itself over time to be a superior store value through wars, economic collapse, and political upheavals.  It is considered the best hedge against real inflation bar none.

If we look at the gold chart, the price in dollars has certainly shown dramatic gains during periods of high inflation. The 1970’s for example.

The chart below shows gold in US dollars versus the official CPI inflation rate over the past fifty years. 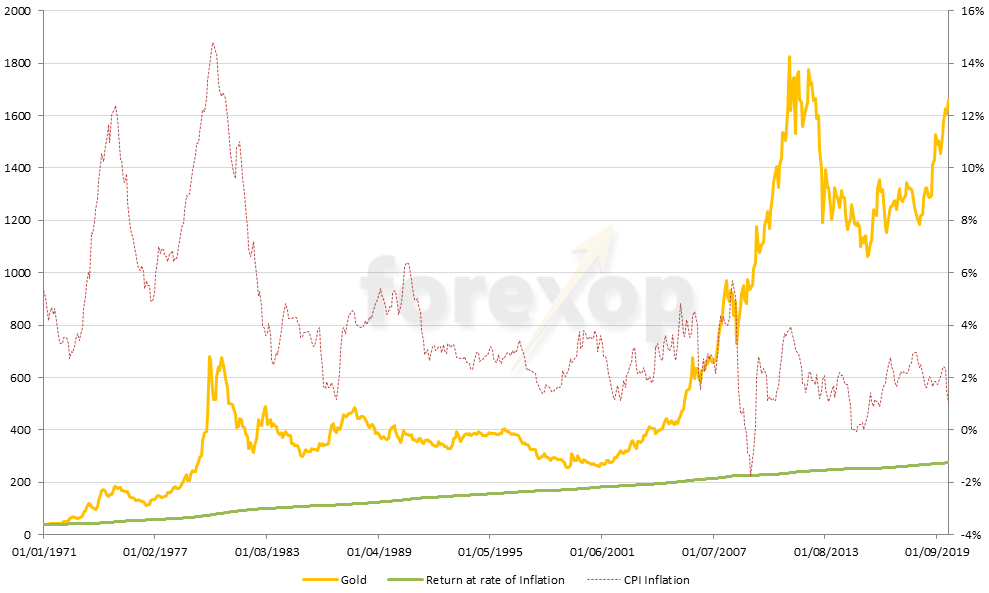 The chart shows a strong correlation between times of high inflation and rising gold prices. This is very noticeable in the periods in the early and late 70s.

Interestingly there’s an inverse correlation between booming stocks and gold. The tech boom for example saw a huge funneling of funds into tech stocks and away from real assets like gold.

Comparing gold in ounces to incomes the chart below shows two major collapses in real purchasing power. The first was in the 1970s, and the second started in the year 2000 and lasts till this day. This is hidden inflation. This shows US incomes, but these numbers are representative of most other developed economies. 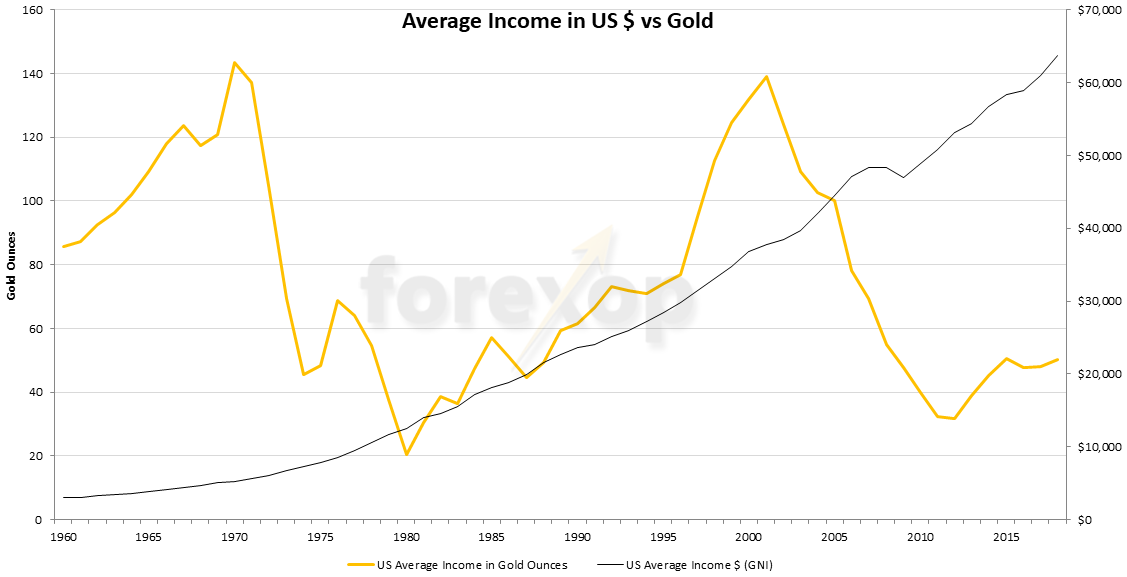 The chart shows that after the early 2000s this relationship between gold and official inflation breaks down. After the mid-2000s, official inflation figures have been falling. They’ve even been negative in some periods, yet the price of gold has skyrocketed over the same time.

So what can we take from this? Of course, many other bodies such as Shadow stats and the Chapwood Index claim that the real rate of inflation is much, much higher than official figures would suggest. Alternative sources estimate that the average real rate is at least 4% or even as high as 8% above official CPI figures.

Just as an example, suppose you’d invested $37 in one ounce of gold in 1971 and at the same time put $37 in a bank account that paid interest at exactly the rate of inflation. As of today, the gold ounce would be worth $1681 whereas the bank account would have grown to just $274. That means gold has outpaced official inflation by over 6 times. What this shows us is that gold doesn’t care about official inflation statistics.

We can look at this in two ways: 1. either the official rates of inflation are way off the mark, or 2. gold is hugely outperforming official CPI numbers.

Of course these are very long time periods, and the exact rate can vary from year to year.

The cost of real day to day goods and services does seem to tally with the fact that inflation is being underreported. Inflation numbers can be distorted by the abundance of cheap imported goods. But the coronavirus may force retailers and producers to rethink their supply chains, and that could be inflationary.

The gold trend is an easy way to get a head’s up on the loss of purchasing power through inflation and it allows us to position ahead of that, either by buying gold or other precious metal assets.