Home Cryptocurrency
One of the fundamental value factors of bitcoin and other cryptocurrencies is their rate of supply. Bitcoin’s protocol is what sets the supply rate of newly minted coins. This is its supply schedule, and the supply of new bitcoins diminishes over time. 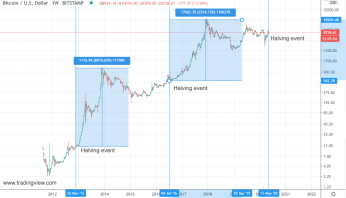 Lots of different forms of money have existed in the past as far as historical records can trace.  Shells, beads, stones, gold and silver are a few examples of forms of money.  To serve as money a system must simply have three widely accepted properties. Money must be a store of value, a unit of account and a medium of exchange. It only requires that the people using that money accept it as being so.

All of us are accustomed to fiat currency; dollars yen, euros, francs and so on. With fiat currency, central banks have an assortment of direct and indirect policy tools to set the amount of money in circulation. Money creation can come directly through the central bank buying debt and other instruments. When it does that it is injecting newly issued money straight into the banking system.

However, most of the supply of new money does not come from central banks. Most of it comes from high street banks. This happens whenever they issue anyone with credit. Fractional reserve lending means that a bank can lend out multiples of its reserve base of money, which it takes in from depositors.

A central bank can indirectly influence this credit creation by imposing higher or lower reserve requirements on high street banks.

Inflation, Deflation: The winners and losers

This process will always create a winner-and-loser effect.  When money supply is increased, the winners are the debtors. They still have to pay back the nominal amount owed on their debts. But they pay back with money that has a lower purchasing power, because its real value has been eroded through inflation. The losers are the creditors, or savers. While they may get back any money they have lent out, its real value is lower.

The reverse is true when money supply contracts.  Debtors are the losers because they will have to service debt at ever higher costs, because the real value of money is increasing. In this environment, savers are winning because they are getting back money that is worth more in real terms than it was when they lent it out.

The creator(s) of Bitcoin were of course, very knowledgeable in money and the meaning of money. They recognized the inherent problem with fiat currency in that the creation of new money, and by extension, the making of winners and losers, is in the hands of a central authority. That power can sometimes be a policy tool of government. Sound money, like gold and silver is sound money because it cannot arise out of thin air.

Bitcoin aimed to replicate sound money in digital form. Bitcoin does not have a central authority. Software rules and a consensus of users agree on how it works.

Where do new bitcoins come from? New bitcoins are created, or minted by miners. A miner is just the name for someone who runs the bitcoin ledger software. By doing that, they are collectively helping to secure and keep the bitcoin blockchain up and running. In return for dedicating their time and electrical resources to this end, they are periodically rewarded with new bitcoin. This is the block reward.

The actual number of bitcoins that are in circulation will be rather lower than 21 million. It is estimated that quite a large number of coins and fractions of coins are locked in wallets where the owner has lost access. This happened, because either the owner has forgotten about them or they have lost their password.

For reasons not entirely clear, bitcoin minting does not drop off gradually each day, or each minute. The issuance of new bitcoins happens in steps where the issuance of new coins to miners is cut suddenly in half. These are called halving events.

The bitcoin halving events create some unique trading opportunities that we do not see in any other asset class. Although gold and silver supply is limited, the mining of new metals cannot be predicted to any such degree of certainty as it can with cryptocurrency.

Halving dates and why they are not exact

Bitcoin’s halving schedule appears in the table below.

Halving does not work exactly on clock time, but rather it works on the number of blocks created. The halving triggers every 210,000 new blocks. In addition, because the protocol is set to issue a new block every 10 minutes, this makes the halving event about a four-yearly occasion. The exact timing though will depend on block chain itself. 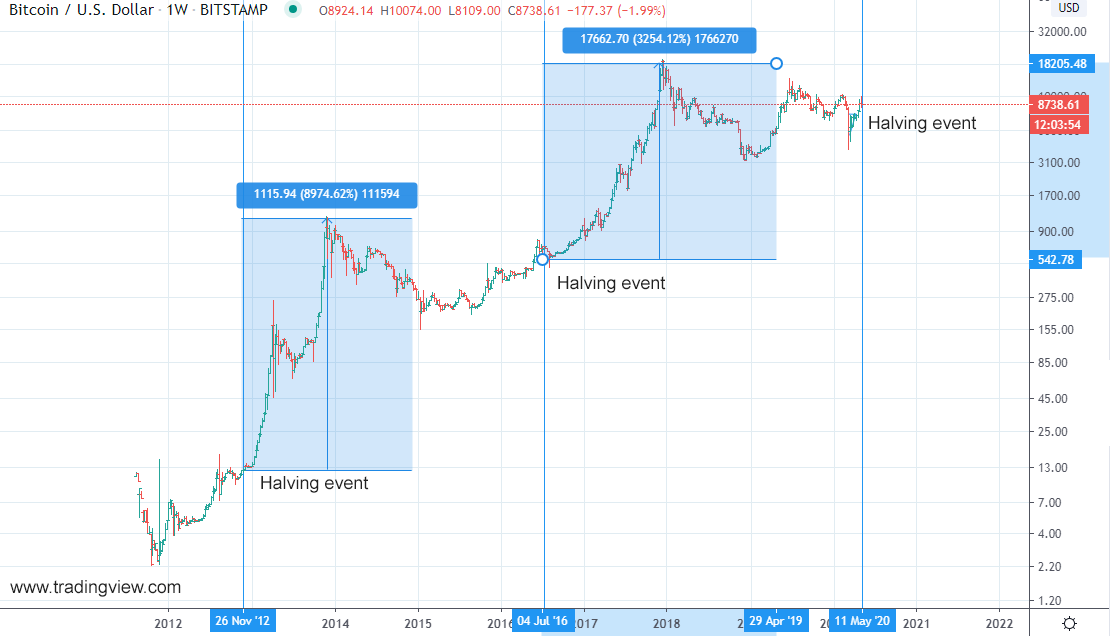 We know the programmatic rules of bitcoin issuance in advance, but the dynamics of a halving event are rather complex and difficult to predict. Here are some things to consider, and what price impact might be:

As the chart shows, previous halving events in 2012 and 2016 created substantial price increases in bitcoin.

Whatever happens in the next events, always expect and prepare for increased volatility around that time. Bitcoin is not unique in this respect. Many crypto currencies have followed bitcoin’s approach and have their own halving events and supply schedules.