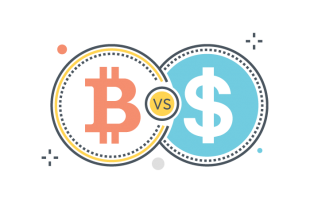 The biggest stablecoins are pegged to the US dollar. Tether for example, currently the biggest, has a market cap of around 8 billion dollars. Most stablecoins run on Ethereum’s blockchain.

You might be wondering, what’s the point. Why not just own dollars, euros or pounds.

Well, the fact that financial regulators across the world are putting stablecoins under the microscope, and even considering an outright ban, might give a few clues.

A stablecoin has the same properties as most cryptocurrencies.

In other words, stablecoins have many of the properties of efficient money. Unlike freely floating cryptocurrencies, a stablecoin can represent a store of value against something people understand and are familiar with. An individual or business owner would likely feel safer placing a portion of their wealth into a stablecoin than they would a freely floating cryptocurrency like bitcoin. The stablecoin is linked to something that is better understood in the real world.

Stablecoins have numerous applications that are only now being appreciated.

DEFI, for example, is an emerging technology and makes it easy to lend out your stablecoins, directly to borrowers, and get a decent rate of return. This is giving borrowers access to credit that they might not otherwise be able to get through the traditional banking system. Without the need for intermediaries, the process is more efficient, and potentially more transparent.

Moreover, stablecoins have a place within the investments and trading arena in much the same way that fiat currencies do. Some exchanges allow you to pledge your stablecoins as collateral and use that value to trade on margin.

The primary banking needs for most people is simply to make regular bill payments, to do cash transfer, and to have a safe means of storage for their currency.

Why then would someone subject themselves to high fees, negative real interest rates, and even the risk of a bank bail-in if there’s an alternative?

In other words, stablecoins have the potential to displace much of the retail banking industry as we know it.

Some of the threats the FSB have highlighted, if stablecoins were widely adopted, include

Some of these concerns are certainly legitimate. There are however many in the crypto community who believe the real motive is maintaining control of elites at the top of the power tree.

An interesting development on this is that many central banks are now contemplating issuing their own digital currencies, perhaps to stem growth in stablecoins early on.

Stablecoins are still emergent technology. It is essential to do your due diligence before placing significant amounts of your net worth into a coin. This is especially true of some of the lesser known varieties that may not be widely accepted and are therefore more prone to fluctuation and even total collapse.

There are two main types of stablecoin; asset backed, and algorithmically backed.

The algorithmic variety includes DAI, which is part of the MakerDAO project. DAI uses a backing of Ethereum tokens that are held as collateral to support its value. Direct purchasers of DAI must pledge an amount of Ethereum and that is held in custody until that DAI is “destroyed” or taken out of circulation. They always issue new coins at a value of 1 dollar per DAI. The peg relies on market forces to arbitrage away any discrepancy from the face value of 1 US dollar.

Algorithmic coins are more complex than asset backed coins. Those like DAI rely on depth of market as well as Ethereum’s value for their stability. While there’s still an element of central control, they are less reliant on a central custodian, which may or may not have the full asset backing in question.

With fully asset-backed stablecoins, the organization that issues the coin holds (or claims to) an equivalent amount of the underlying asset, dollars for example. This means a coin is, in theory, redeemable at face value. USDC is an example of a stablecoin that claims to be fully-backed by an equivalent amount of fiat currency, namely US dollars. Organizations that issue stable coins should hold the assets in a fully segregated, insured and audited bank account. This will ensure, firstly that the assets do indeed exist as claimed, and secondly, that in the event of bankruptcy, the assets can’t be seized to pay creditors.

Not all stablecoins have full backing in the underlying asset. For example, it was revealed recently that Tether, the biggest stablecoin by market cap, only holds a partial backing of 74% in hard currency. The rest is held in short term securities, and these might fluctuate in value, which could impact the exchange rate.

However this revelation didn’t cause any noticeable change in Tether’s exchange rate against the US dollar. As a trust system, as long as people trust the value of a stablecoin, and are willing to exchange it with others, Tether and coins like it can maintain stability in their peg without full backing.

In fact, this has happened with fiat currency over time. Most fiat currency was originally backed by gold or silver, and over time, that backing was steadily reduced and eventually discarded altogether.

Within the cryptocurrency ecosystem, regulation of stablecoins is fairly light; users are free to transfer the coins and spend them as they choose. Regulatory gate checks do apply when converting your fiat currency to stablecoins, or converting stablecoins back to fiat. In almost all cases, you’ll be required to follow procedure such as know-your-customer (KYC) and anti-money laundering (AML).

Another factor to be aware of with stablecoins is the conversion mechanism. Services that offer currency conversion are often very low volume markets with wide spreads. When you convert your stablecoin into another fiat or cryptocurrency, you may have to pay a significant cost. This is particularly risky with some providers who offer to do the conversion at market exchange rates, rather than agreeing a fixed rate advance. A fixed exchange rate is worth it, even it it means paying a bit extra, especially for exchanging larger amounts of stablecoin.