Home Cryptocurrency
With wild central bank intervention in financial markets, bond yields are touching their lowest in decades if not centuries. Central banks are telling us, not only that money is free, but you’ll get paid to borrow it. At least if you happen to be a government.

This upside down world appears to be the new normal. At least for the near future. 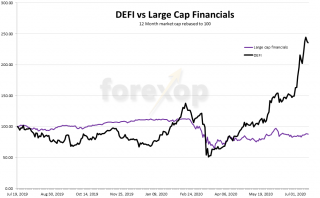 DEFI: Where is it headed? © forexop

As of now 10-year government bond yields in the Euro area are paying interest an average at minus 0.5% per annum. And other major economies are following on the same trajectory.

Let’s put this into context. If you buy investment grade central government bonds, not only are you losing money in nominal terms, allowing for inflation over that 10 years you are paying close to 1% to lend out your own money.

DEFI’s time is now or never

This distortion is having some bizarre side effects. Trillions of dollars of investable wealth, which would normally be comfortable sitting in high grade government bonds, is aggressively seeking out a worthwhile return.

This redistribution of capital has pumped stock markets up to new highs. With stock valuations already looking stretched, there’s only so far that this merry-go-round can go.

It’s well known that managers of large wealth funds typically follow safe, conservative mandates. However, when faced with negative real returns, not just in the short term, but in the coming decades, they and their advisory boards are sure to start seeking out better alternatives.

On the same note, cash held by individuals in non-interest paying bank accounts is also at record highs. But the irony is that if you want to take out an unsecured loan, you might be charged upwards of 20% per annum interest to borrow.

This backdrop of vast amounts of capital seeking a return, as well as the harsh inequality between savings and borrows rates for ordinary people, bodes well for alternatives like cryptocurrencies and tokens. 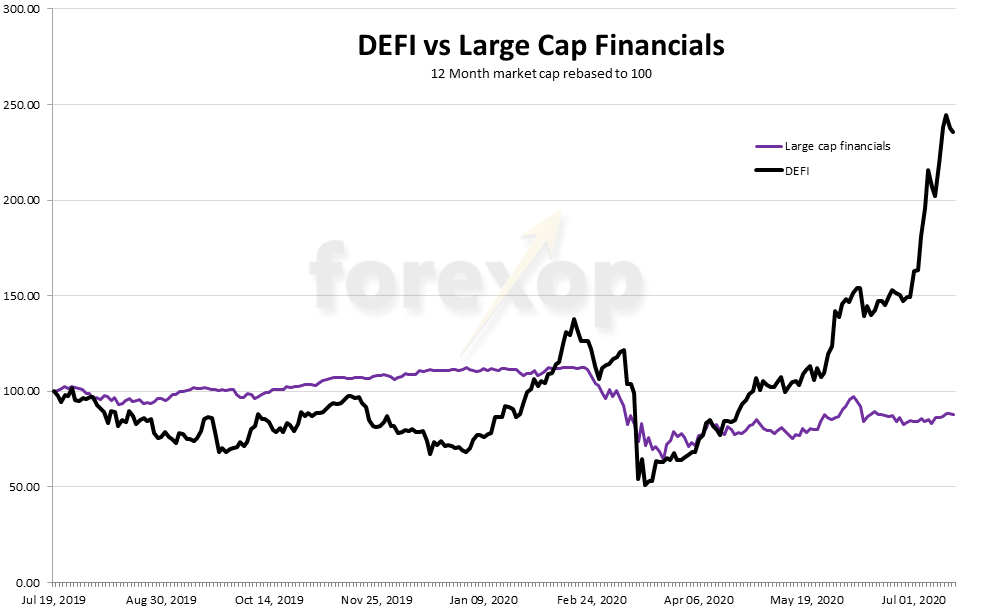 The DEFI sector has been heating up over the last few months. The chart above compares the 12-month relative performance of the S&P 500 financials (SPDR Financial Sector Select Fund) against the top five large cap DEFI cryptocurrencies over the same period.

This stark contrast is telling. The DEFI sector has grown by 150% while major financials have shrunk by about 13%. What’s more many DEFI coins have far surpassed these gains, with some going up by 10 or even 100 times over that same period.

The DEFI space is still minuscule when you put it in perspective with the global financial system.

Even a small allocation of capital into DEFI could drive dramatic gains in the years ahead.

The apparent advantages of crypto assets and DEFI seem obvious to most enthusiasts.

There are some challenges to overcome as well.

Which businesses could DEFI disrupt?

Here are some of the sectors that DEFI and blockchain solutions are starting to take market share away from, and some others that it could in the future.

DEFI lending is already well-established and is growing at breakneck speed. The total dollar investments locked into DEFI has nearly tripled, in the past month alone. With apps like BlockFi, Ledn and others offering high single digit returns on stablecoins, and even on some crypto currencies this trend isn’t surprising. The number of projects and choice available out there only looks set to rise in the months and years ahead.

Global insurance is a $5 trillion dollar market and rising. Blockchain projects in this sector are thin on the ground. That is likely to change soon. Having insurance data on blockchain could bring a number of advantages. Underwriting would be more transparent and able to draw on wider pools of claims and other data. It would assist securitization of risk. It would allow automation of key tasks like applications and making claims.

An aggregation of on chain data could open up insurance to many other segments that were previously beyond the realm of traditional business due to lack of data.

As the value locked into smart contracts becomes larger and more critical to business operations, the need for smart contract insurance will increase. NXM has launched a project to tackle just this issue. Holders of the NXM token participate in all aspects of the insurance system from risk assessment, to collecting premiums.

Investment funds like Grayscale allow anyone to invest in cryptocurrency through a traditional broker. However, this is an outlier. The majority of prospective cryptocurrency funds have been denied regulatory approval for various reasons.

Blockchain technology has the ability to bypass this route altogether, and provide the service directly to end investors in a better way.

It is well accepted now that most managed investments underperform their benchmarks. A consensus investment decision through a DAO could have many advantages over a centrally planned fund. In this way, the wisdom of the fund would grow with the number of holders.

Crypto20 for example is a cryptocurrency index fund. Investors buy the C20 tokens which are backed by a tokenized basket of 20 leading cryptocurrencies. The company’s management team decides the constituents of this particular index.

Another project that’s geared more towards traders is Token Sets. With this platform, traders deploy their own cryptocurrency strategies and let others follow, much like social trading. Unlike social trading platforms however, Token Sets is entirely non-custodial. Your funds remain under your control. The strategies are implemented as ERC-20 smart contracts that can be bought and sold. The rebalancing is done automatically to maintain a mirror of the underlying trader’s strategy.

In the future, we can imagine a project where a DAO (distributed autonomous organization) would be capable of deciding the constituents through a voting mechanism. Or it could be decided by a calculation inside a smart contract.

One of the functions of investment banking is to provide companies with access to capital. We have the equivalent in the cryptocurrency world. Blockchain companies raise funds through ICOs (initial coin offerings) and IEOs (initial exchange offerings).

The barriers to raising capital through ICO or IEO are significantly lower than through the banking sector. This access to capital has sparked the explosion in innovation that we have seen over the last couple of years. That innovation would never have happened had the only access to capital been through investment banks and venture capital.

As this movement continues, it is likely to attract more and more liquidity into the crypto funding space.

In addition, a wide variety of stablecoins gives organizations an incentive to keep cash within the crypto ecosystem rather than off-ramping to fiat currencies.

DEFI is biting into traditional money market territory as well. Money markets provide for short term borrowing and lending needs – anything from overnight to one year.

Compound and related projects allow investors to contribute crypto assets to their lending pool and earn interest on those assets. Other projects let users stake real world assets as collateral for short term loans. These are similar to money market repos.

These services will most likely expand and become more sophisticated as individuals and companies demand access to liquidity in the form of stablecoins.

A next logical step on from tokenized fiat currency would be exchanges where these tokens can be exchanged for one another.

Turnover in foreign currency exchange is approximately $5 trillion dollars every day. Despite the size of the forex market, it is largely an off-exchange business with activity controlled by a few primary dealers.

Having currencies tradeable on decentralized blockchain offers several clear advantages for end users. These include improved transparency, lower fees, 24×7 opening versus 24×5, and elimination of counterparty risk.

As well as currencies, the market for derivatives such as swaps, forwards, options and other instruments is gigantic. The BIS estimates that the notional value of all derivatives could be as high as $600 trillion dollars while other assessments are even higher.

Blockchain and DEFI is only just getting started. It will be fascinating to see how the industries evolve over the coming years.

A reminder as to how quickly society can embrace new technology is that just 25 years ago, most people had not heard of the internet!