JP Morgan famously said, “Gold is money, everything else is credit”.

Much of the modern global financial system is a paper system that relies on trust between counterparties. We assume the money will be there when needed. This is even true of the money we hold in our pockets and bank accounts. 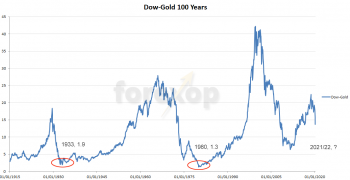 When we are all so accustomed to this trust system, it is easy to forget the essential point that JP Morgan was making.

The Swiss franc was one of the last fiat currencies backed by gold. Even the Swiss franc’s 40% gold backing ended in the year 2000 by Swiss referendum.

Many economists argued, then and now, that the gold standard constrained the global economy because there isn’t enough gold in the world to back all trade and commerce.

Global trade and commerce has certainly exploded since then. But much of this expansion has been fueled by our inflationary debt based monetary system.

A lack of sound money backing has given governments and banks the world over, free reign to print virtually as much of their currency as they wanted. This is precisely what we have seen over the last fifty years. This has given rise to the modern era of debt and credit.

Gold backing held governments to account because they couldn’t spend beyond their means. There’s only so much gold, and it can’t be printed into existence like paper money.

The fiat system allowed governments to spend today and defer payment, through taxes or inflation, to the future. This has led to the perpetual debasement of all fiat currency against hard assets like gold, silver and land.

Why should we care about this? Debt relies on a chain of repayments from debtor to creditor to debtor and so on. When that payment chain breaks, as it did in 1929 for example, the result is a catastrophic deflationary debt collapse.

That’s why when financial markets are in turmoil people rush in to hard assets. Hard assets are those, which are highly-liquid and are a store of value. These are traditionally gold, silver and possibly, now cryptocurrencies like bitcoin.

Gold and Silver: Funds, CFDs, ETFs and the Paper Market

Physical gold and silver are real money because they can’t be debased, printed out of existence, or defaulted on. If you own gold and silver nobody else has a claim on that asset. You own it.

However, this is where an understanding of the paper market and the physical market becomes crucial.

Markets such as CME futures, ETFs, CFDs, and funds are all so-called paper markets. These are financialized products controlled by banks and other large institutions. When you buy these products you only have a claim on some paper gold or other metal. And that gold may or may not exist. The exact numbers are not known, but it is estimated that for 100 ounces of paper contracts traded there may be as little 1 ounce of physical metal to back it.

The same is true for ETFs, funds and even when buying gold from banks. What you are buying is a claim on a precious metal, and that metal may have been sold many times over through the fractional reserve system.  Even many ETFs and Funds that are 100% bullion backed cannot be considered safe from systemic risk. This is because they rely on a chain of counterparties and custodians. If there is a default in that chain, because of a force majeure (e.g. coronavirus), you would probably end up having your position paid out in worthless paper currency.

Why Only Physical Bullion Protects Against Systemic Risk

The paper market is adequate if you want to speculate on some short term price movements, hedge, or protect against some downside risks in an average bear market or down cycle.

However, the only protection against systemic shocks is to own physical gold and silver bullion. The period 2008-2020 has seen a rapid deterioration in the stability of the global financial system. We’ve had bank bail-outs, bank bail-ins, stock and bond-market collapses and lock downs. Now with the coronavirus, indebted governments around the world are abandoning pretense of independence and are tapping straight into their central banks’ printing presses like they are national piggy banks.

First time buyers of gold and silver often turn to online dealers of gold and silver coins, and bullion bars. This is a great way to start protecting your wealth. The downside is that premiums on buying small bars and coins can be very high because of the small unit size. Moreover, in a crisis, such as the one seen in 2008, or the 2020 coronavirus, small bullion dealers simply run out of bullion to sell.

At these times, premiums for gold and silver can rise from anywhere from 10% to 50%. You cannot recover that premium when you sell back because most bullion dealers will only pay spot price.

The alternative is to use a bullion investment service, such as BullionVault. With this service, you can buy and sell precious metals at a very small spread over spot. The spread is typically less than 1%. The metals are stored in non-bank vaulted storage, which is fully insured. You can choose from a number of locations around the world like Zurich, London or Singapore.

BullionVault holds around $2 billion in client assets making them one of the world’s biggest bullion investment services. They are primarily a place to buy and store precious metals. You can still take possession of the metal you own. For a fee, you can have your bullion melted into bars and sent to you by courier.  Storage fees at BullionVault compare favorably with ETFs and other storage services offered by small bullion dealers.

Ironically, bear markets can be an excellent time to start investing in precious metals. This is as long as you avoid the paper market and have physical ownership.

A sharp financial sell-off forces investors in distress to sell any liquid assets that they own. Paper gold and silver fall squarely into this category. In 2008 and 2020, spot prices fell sharply as investors liquidated positions in gold and silver to meet margin calls, or just to extract what was left of their portfolio, because precious metals prices held up far better than other assets.

This naturally puts downward pressure on the spot metal prices. The catch though is that the cost to buy from physical bullion dealers may be far above the paper spot price. Since they are not trading in paper, which can be created at will, bullion dealers need to raise premiums to meet demand and cover hedging costs. They may need to cover sales in the futures market as well, and this can create a sharp dislocation in the spot and futures prices. The spread between spot and futures can then be an indication of the shortages of physical metal that have yet to feed through the system.

One of the things gold investors look at in a bear market is the ratio of the Dow to the price of gold. That is, how many ounces of gold do you need to buy the Dow. That ratio peaked in 2000 when it reached 42 ounces. 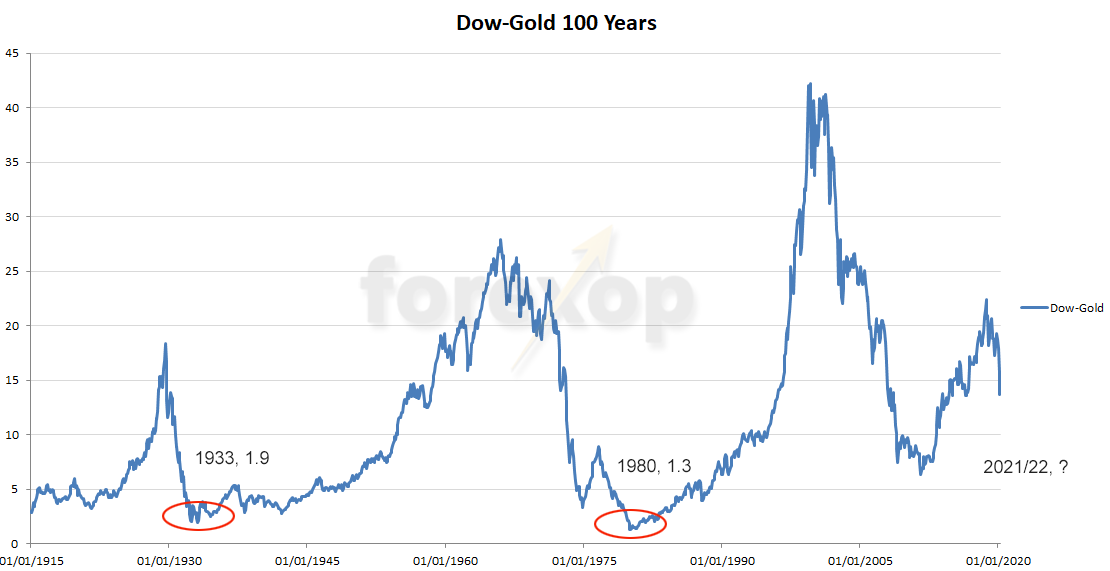 These lows show us extreme events, when stocks are extremely cheap when priced in gold and the highs show the opposite.

It is anyone’s guess if we reach parity in this bear market. If this bear market takes the Dow down to 16,000 that’s nearly a fifty percent drop from its peak in February 2020. Then, if gold reaches $16,000 per ounce that is nearly a 10 fold rise from today’s prices. That’s not outside of historical norms because in the 1970’s the price of gold rose from $35 to $700 during the period of highest inflation. That’s a 20 fold increase.

For another point of view, if you look at the US debt clock, it shows the dollar to gold ratio in 1913 and that was $28.77 to the ounce. If that’s adjusted for the amount of dollars in existence today, the gold price would need to be $19,421 per ounce.

On the other hand, if we had a stock market melt up as a result of hyperinflation, that could put the Dow much higher in nominal terms but it’s purchasing power would be greatly diminished.

Cryptocurrencies are a form of money. They’re held outside of the banking system, and most are not beholden to a central authority that can inflate their value away.

Crypto assets were designed with financial market turmoil in mind. In other words, they are meant to be digital precious metals. As there’s no historical precedent, we’ll have to see if crypto currencies will prove to be a store of value over time in the same way that precious metals have proven to be.