Home Trading Learning
As we’ve seen recently asset bubbles can appear anywhere, whether stocks, bonds, oil prices, real estate, or high interest rate currencies. When we hear of huge fortunes being made overnight, it is easy to be drawn in by all of the euphoria. 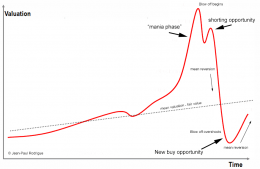 But all financial bubbles end the same – like a volcano they sooner or later blow off their top and collapse in on themselves.

Although we don’t witness bubbles of the magnitude that caused the 1929 or 2000 crash very often, there are smaller manifestations of bubbles everywhere and across countless markets.

Bubbles and blow offs produce winners and losers. The winners are those who get in early or those who anticipate the crash and profit from it. The losers are those don’t know what’s coming.

That means recognizing a bubble & blow off as it appears and being able to anticipate what’s coming next, amid all of the hype and spin is an extremely valuable skill.

The Life and Death Cycle of a Bubble

A bubble occurs when the price of an asset inflates too much, too quickly.  Whether oil, real estate, stocks or currencies, bubbles have the same drivers and the same end game. 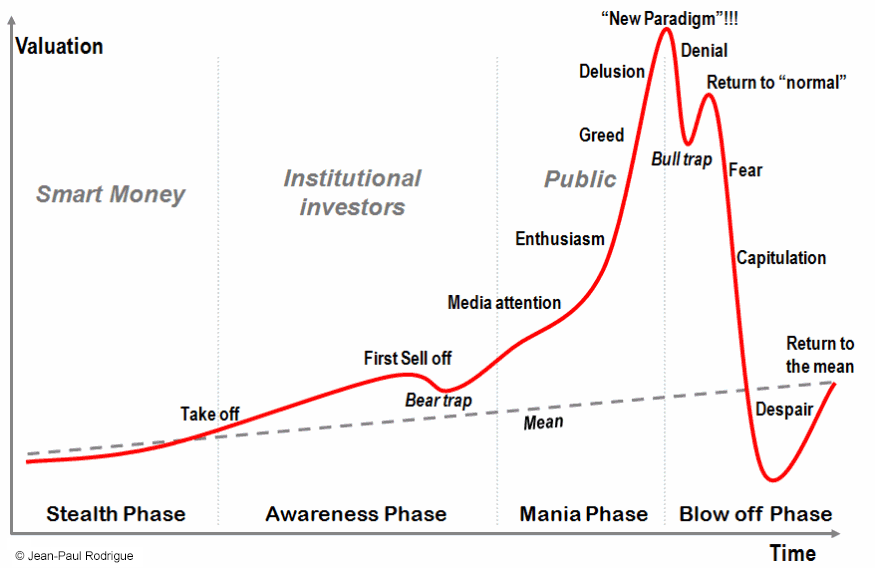 Most bubbles go through a predictable lifecycle. The four main phases are stealth, awareness, mania and blow off – Figure 1.

Stealth and awareness to mania

Major bubbles often get started with a new opportunity.  A radical new technology, product or an emerging economy, think China for example.

Early on the smart money gets in as investors in-the-know seize an opportunity to buy early. This is the take off.

During the take off the institutional investors become aware driving the price higher. The new trend pulls in momentum traders who push the price up higher.

The chart now looks increasingly like a one way bet and this attracts media attention. The excitement and the fear of missing out then draws-in more and more people. This is when the bubble starts to take on a life of its own.

In the mania phase the valuation of the asset is no longer driven by fundamentals but by the expectation of future price rises.

During this phase, any bad news is ignored and objective opinion is scarce. Anyone who talks down the market is dismissed as a naysayer.

Pack of indicators for divergence traders. Includes a technical divergence tool, an indicator for analyzing divergence between asset types, and a stop/profit advisor.

The mania phase is usually where the news comes to the attention of the average person in the street.

Meanwhile, during the euphoria the smart money is getting out and booking tidy profits along the way.

The “blow off” phase

The law of asset bubbles is that they collapse far quicker than they take to grow. A bubble that takes 10 years to appear can blow-off in just a few months.

The “blow off” is recognized by a sudden correction against the trend that takes everyone by surprise.

There’s no mathematical rule that tells us what causes a bubble to blow off. But it’s a bit like the last flake of snow that triggers the avalanche.

How to Trade a Blow Off

Trading against a bubble when it is in full swing is very risky. It can be compared to standing in front of an express train.  This is a bet that can stretch even the deepest pockets.

Most experienced traders wait on the sidelines just watching the drama unfold and waiting for the right time.

This absence of sophisticated investors extends the life of the bubble because it stops the mispricing from being arbitraged out. This permits many bubbles to grow unchecked, at least until something gives.

The way to trade a bubble in the late stage is to wait until the blow off has already started. The chart in Figure 2 illustrates. 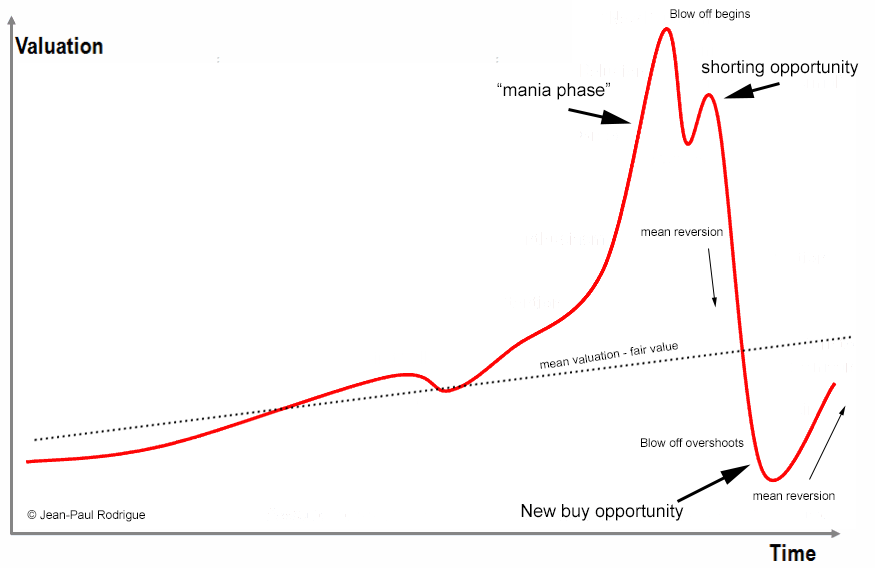 Shortly after the first crash what typically happens next is a strong bearish rally. This is what’s known as the bull trap. The bull trap draws in new money as financial commentators talk about a “great buying opportunity”.

The bull trap is the first corrective wave in the Elliott down cycle. The price is now starting to trend back down to a more realistic valuation as mean reversion gets underway.  Nonetheless those still vested in the bubble will be in denial at this point.

Sometimes the bull trap will make a double top or a head and shoulders. But it usually won’t push any higher than the main top.

When timed correctly, short selling at the first bearish rally can be low risk and high reward. The best time to sell is when the bull trap starts to collapse.

At this time the upwards momentum of the bubble is lost and those vested in it will start to look for a way out. When margin calls are made and automated stop selling starts to kick-in, the real collapse will get underway.

There is no guarantee that the price will ever recover to the same highs again.

Bubbles are high risk, high reward plays. The charts do tell us how bubbles grow, live and eventually die but they can never tell us the precise times that any specific event will happen.

Tactical buying of options can be a less risky way to profit from downturns than short selling because when buying an option you can’t lose more than your initial stake.  This however does require some knowledge of options trading.