Home Technical Analysis Candlesticks
The shooting star is a bearish candlestick pattern that often appears at trend tops. It can signify a short term or long term bearish correction.

In major currency pairs, the shooting star is shown to be reliable at predicting the immediate period ahead, but it is less reliable in forecasting longer term changes in trend.

How to Spot a Shooting Star

This pattern resembles an upside down or inverted hammer. It is a single candlestick with a short body, a long shadow that points up and a small or non-existent lower shadow. The shape and position of the candlestick within a trend is more important than the body color. The body can be either black or white.

The pattern is only called a shooting star when it appears in a rising trend. 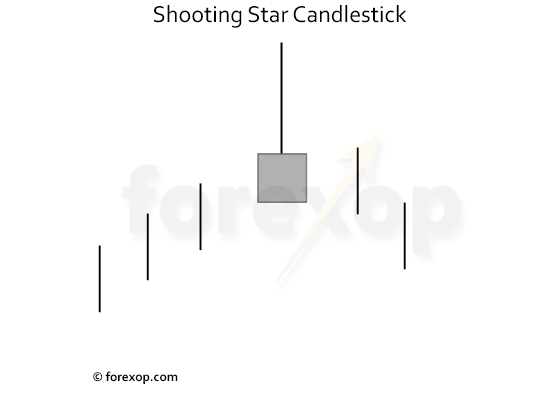 To be classed as a shooting star it should reach or be close to a recent high in the trend that’s forming. When the same pattern forms at a trend bottom it is called an inverted hammer.

It can readily appear in a bearish trend where the market is making a bullish correcting wave.

A shooting star will stand out in the chart because the shadow will be long in relation to the shadows and bodies of other nearby candlesticks.

In a strong end rally the shooting star may open with a gap from the last close price. When this happens it’s said to gap higher. It may then develop into a larger formation such as a rising window or an evening star.

The appearance of a shooting star does not inevitably mean a bull trend is about to reverse.

These patterns regularly appear in the up wave cycles in a rising or falling market. Therefore it may mean that a short term correction is forming but that the main trend will continue in the same direction.

When a shooting star forms it indicates that the sentiment of the market may be changing at that point in time. The long upper shadow means that buying demand was strong enough to push the price well above the open level.

Traders holding short positions may have been forced to exit and buy back their positions. Likewise a price reaching new highs could initiate an abundance of buy side stop losses which would add to the volume of buyers.

Eventually the new price-high attracts new sell orders and profit taking and the market fails to remain firmly within that higher price range. At this point the market starts to reverse or correct lower and eventually closes near the open.

Reliability of the Shooting Star

Most shooting stars do produce some bearish reaction following their appearance. At least for a short time.

Looking at historical daily charts, we examined the five bars following every shooting star and obtained the following results.

A shooting star formation produced a bearish correction 54 percent of the time according to the historical data. Some currency pairs did produce stronger reactions, particularly USDJPY and AUDJPY.

When looking further ahead the pattern didn’t lead to a prolonged bearish correction any more than chance alone. In most cases the bullish trend continued to be the governing trend.

On balance, fewer of these patterns will lead to a prolonged change in trend direction in a major currency pair than won’t. But that’s not to say the pattern isn’t useful.

The shooting star can be useful as a sell indicator under certain conditions. On the daily forex charts, it is as a sign, of a potential short term bearish correction. And that might potentially develop into a larger correction.

The pattern can be traded in either bearish or bullish trends. In a bearish trend, the appearance of a shooting star can signal the end of a corrective bullish wave.

Figure 3 shows an example of this. The chart is USDJPY daily. 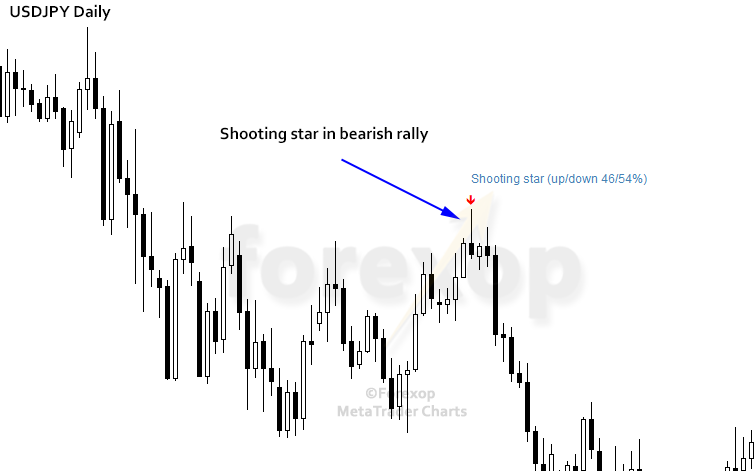 As with any technical indicator, each one must be examined as an individual case. The nature of the trend, the market momentum, as well as the resistance areas are all important factors that should be examined. From these pointers we can screen out the weaker signals.

The bull trend makes five minor corrections on its path. Shooting star patterns appear in the last two of these, and at the peak as the trend finally makes a top and reverses. The appearances are marked with red arrows. 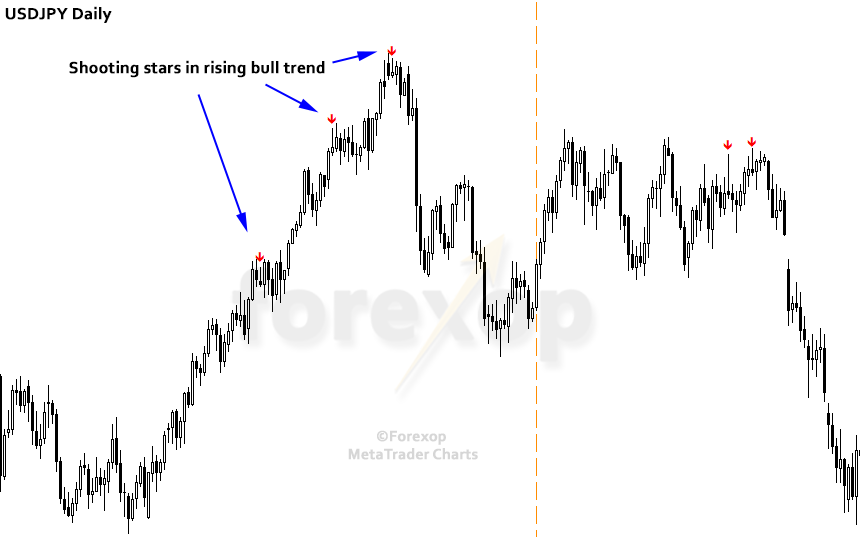 The two patterns that appear before the main top, do lead to minor bearish corrections. But it would be extremely risky to enter a short position here into such a strong trend, based on a single candle marker.

With a strong trend, it is preferable to wait for at least one other confirmation. That confirmation should show us that the trend is turning, before a short position is entered.

That will mean waiting for a bearish breakout event such as moving average crossover or range breakout.