Home Technical Analysis Candlesticks
The inverted hammer is the fourth and final in a group of four related Japanese candlestick patterns: the hammer, inverted hammer, shooting star and hanging man. Both the hammer and inverted hammer appear in downtrends and are conventionally taken as a sign of a bullish reversal.

Here we’ll analyze the performance of the inverted hammer against historical forex charts. 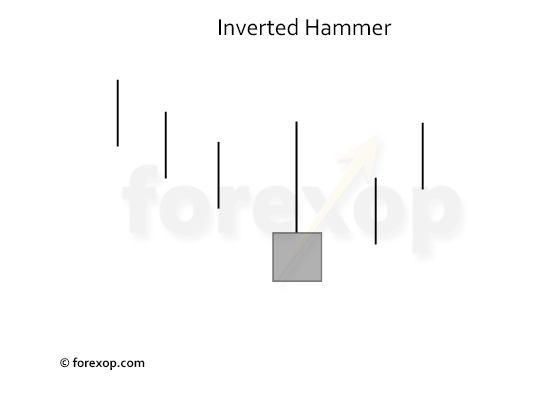 While the hammer and inverted hammer are conventionally treated as bullish, nonetheless contrarian traders will sometimes use them as bearish flags.

Unlike a regular hammer, when an inverted hammer appears, the base of the candlestick should be close to a recent low in the trend and the shadow should make a substantial bullish retracement. See Figure 1.

The position and appearance of the inverted hammer is more important than the body color. The body color can be either black or white.

This pattern has the same shape as a shooting star. The only difference is that it appears at a trend low not a trend high.

In most forex charts, inverted hammers are a less common occurrence than regular hammers. They also have a tendency to to produce more confusing signals for trading. 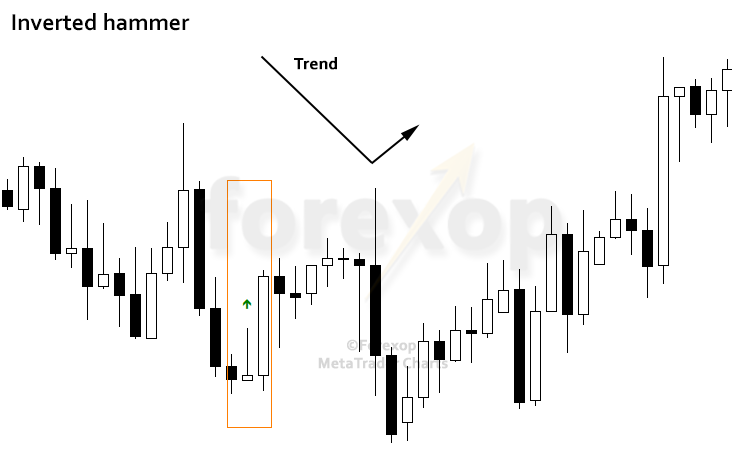 Many traders use the rule that the shadow should be at least twice the length of the body. The problem with this alone is that it can flag up a lot of weak signals where the body is very small as is the shadow.  Some of these can be borderline doji patterns.

We prefer to add to the above rule that the candle’s range (high to low) should be at least twice the average range over a constant period.  This means that only patterns that create a relatively hefty bullish retracement are flagged as entry signals and others are ignored.

At first it seems a bit confusing that both the hammer and inverted hammer are treated as buy signals, even though they appear to be opposites.

However, while both can indicate a change in sentiment from bearish to bullish, the market dynamics are entirely different.

With a hammer pattern, the buyers are capitulating as a bearish trend accelerates. This selling pressure produces the deep, but short lived low in price which forms the lower shadow of the hammer.

On the other hand, with an inverted hammer, buying volume is strong enough to raise the price higher for a short time. This creates the long upper shadow. The buying interest is not sustained though and the price does not remain in the higher range.

The market then falls back to close near the open and this is what produces the characteristic inverted hammer pattern.

The inverted hammer suggests a market that may be turning. And while this first breakout has failed, it suggests that buying interest is starting to return, and the market is possibly oversold.

For that reason, when trading the inverted hammer, most wait for at least one confirming signal. This can be a second bullish candle that follows on from the pattern or any other confirmation of a bullish breakout.

Reliability of the Inverted Hammer

We analyzed the pattern’s reliability on six forex pairs, USDJPY, EURUSD, AUDJPY, AUDNZD, USDCHF and GBPUSD. The tests were performed on the four hour charts and thirty minute charts and they covered a ten year time span.

We performed each test twice; once with a confirmation and once without a confirmation. In the tests without confirmation, every appearance of an inverted hammer was treated as a buy signal.

In the tests with a confirmation, any cases that weren’t followed by a bullish second candle were ignored.

In each case, the 30 bar time period immediately following the earliest buy entry point was examined. It was classed as either a bullish or bearish correction depending on the price movement afterwards.

The table above shows the percentage of times that a bullish correction followed the buy entry point for each currency pair.

On the four hour chart, with the exception of EURUSD, most of the appearances of an inverted hammer were followed by a bearish continuation and not a bullish breakout. In other words, the bearish trend resumed and did not reverse as is predicted.

On the thirty minute chart the appearance of an inverted hammer resulted in a bullish reversal breakout higher than expected by chance alone. This result held true for all of the forex pairs tested and the average was 52.9% in favor of a bullish reversal.

Again, applying the confirmation method added little value and did in fact reduce outright performance. When we waited for a confirming candle, the odds of a bullish break dropped to 51.9% a reduction of 1%.

From historical forex data we found the inverted hammer to work significantly better as a bullish indicator at lower timeframes, than higher time frame charts such as four hourly or daily.

At the higher time frames, analysis of historical charts shows it would have performed better if used as a contrarian signal. That is as a sell entry rather than a buy.

In all of the tests, waiting for a confirming bullish candle did not improve profitability but rather reduced it. This may be explained by the fact that a confirmation introduces a delay of at least one time period before the trade can be placed. Of course other confirmation signals could produce different results.