A bullish breakaway is a chart reversal pattern that can appear in either a bullish or bearish market. Traders commonly see this pattern is an indication of a bullish reversal. But in certain cases it can also be profitable to trade it on the sell side, as a contrarian trade.

How to Detect a Bullish Breakaway

This pattern is more complex than many others since it’s a grouping together of five candlesticks. 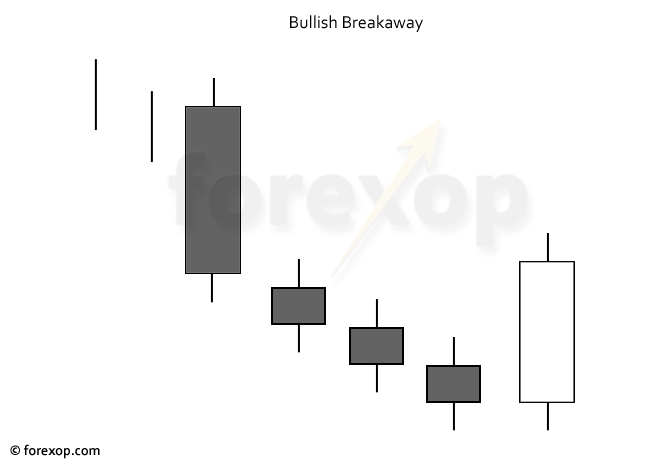 The middle three candlesticks can be either bearish or bullish, but will usually be bearish. The final candlestick in the pattern is bullish, and must close above the top of the inner three bars.

Many stock traders will exclude bullish breakaways in the following circumstances: Where the first candlestick in the pattern is small, where the pattern doesn’t touch a recent low, or where the first inner candlestick doesn’t “gap down” at the open. In a stronger pattern the last bar should close above the close of the first and “close the gap”. In continuous markets like forex we usually relax these constraints a little.

A bullish breakaway can appear anywhere including bullish and bearish trends and even in flat markets. We’ll usually give higher weight to the pattern when it appears in a downward swing or in an oversold bearish trend.

You’ll often see clusters of breakaways patterns at trend bottoms. Many of these turn out to be false signals which appear in the volatile sessions before a market turns.

When the bullish breakaway appears in a chart it suggests sentiment is gradually changing from bearish to bullish.

When analyzing the chart what we are looking for is evidence that a capitulation is building. That’s where those who’re long the market throw in the towel. This will show-up as a sharp and sudden drop in price.

Keep in mind that the breakaway pattern might itself be the main capitulation or it can form either side of it. 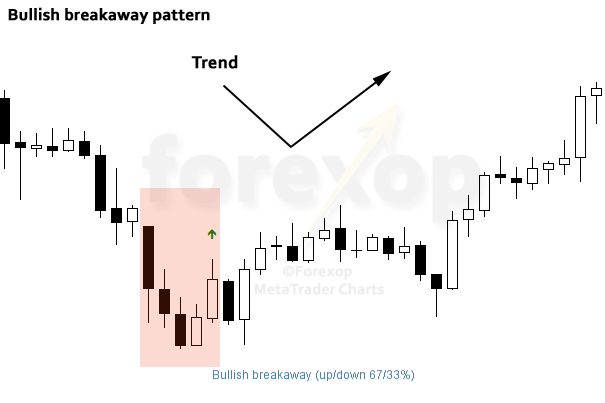 Looking at the pattern, the first bar is bearish and often signals a deep drop in price. The three inner bars represent slowing price falls caused by a flip in demand from sellers to buyers. So at the inner bars, downwards momentum is slowing.

The final bar is bullish and it starts to reverse the price fall. On a daily chart the whole breakaway sequence will take five trading days to play out. This gives plenty of time to analyze the market both from a technical as well as a fundamental point of view.

The chart in Figure 2 shows a real example. The shaded box highlights the pattern which is forming in a bearish trend.

The first candlestick is bearish and long and it forms at the last trough in this particular downtrend. The three inner bars represent a turning of sentiment from bearish to bullish. The third inner bar is bullish as is the last one.

Like any reversal pattern, the bullish breakaway is used alongside other tools and techniques. In this way we can build up a picture of the most likely direction that the market will take.

The reliability of the breakaway pattern varies enormously from chart to chart and time to time. And so when trading it’s essential to have the data available that will show the highest probability direction that the breakout will move in. This can be done with a chart tool. Without this you’re essentially trading blind since breakaways can at certain times be traded more profitably as a contrarian trade in the reverse direction. 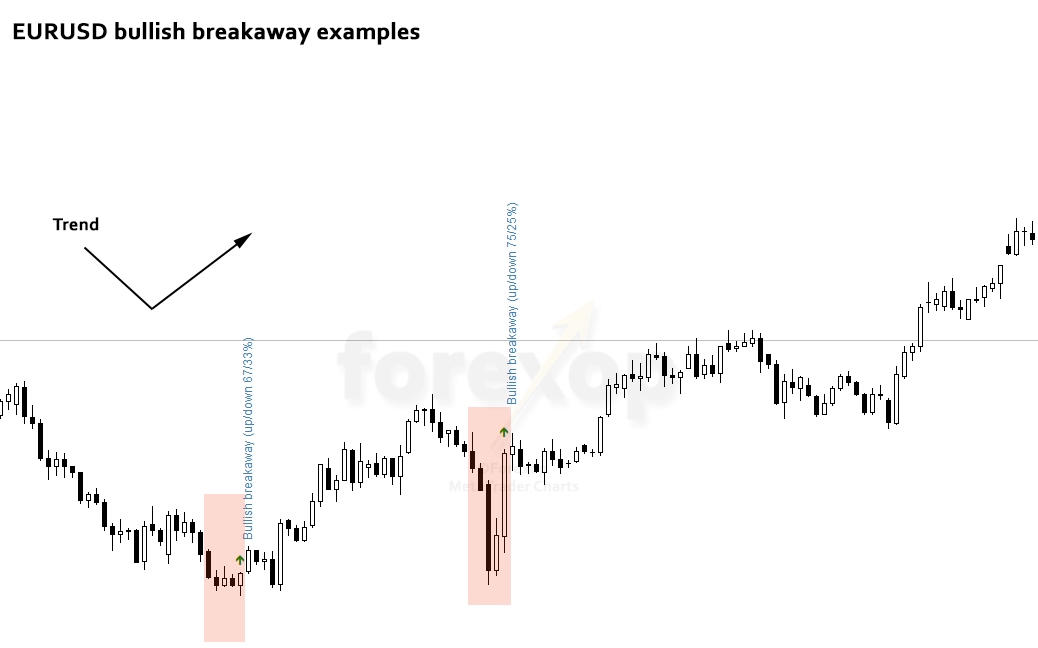 The chart in Figure 3 shows another real example again on the EURUSD daily chart. Here a bearish trend is beginning to turn up. First we see a weak bullish breakaway pattern forming as marked with the shaded box on the chart.

While classified as a breakaway it’s a fairly weak one because we don’t see a significant trough forming that we would normally see with a strong reversal pattern and which would suggest a capitulation.

The market then rises and falls again. The chart then develops into a second stronger breakaway and we also see that the market has formed a “double bottom”. This is a common event when strong bearish trends come to an end.

Bullish breakaways will often appear in the minor swings or waves that naturally develop in an up trending market.

These are often the easiest and most profitable breakaway setups to trade. We can trade into the rising trend using a grid method with smaller position sizes rather than risking a single large position. 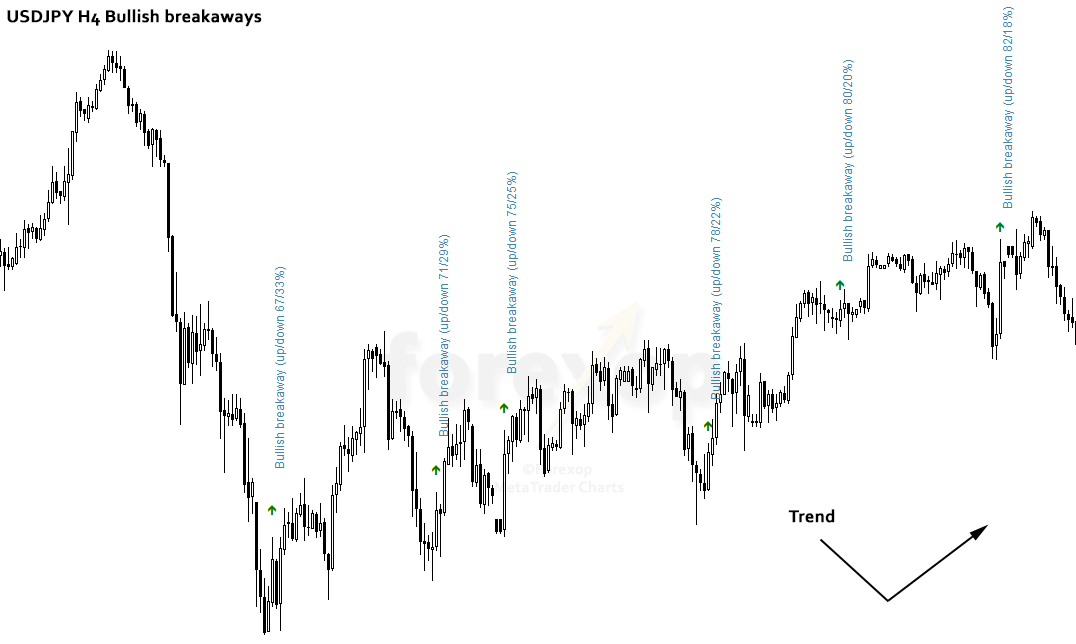 This is generally less risky because we are always trading in the direction of the trend rather than trying to time the exact reversal point. We also divide the entire position into smaller units to limit risk on any individual trade.

The chart in Figure 4 shows a sequence of bullish breakaway patterns forming in a strongly rising market.

Here the probability of an upward breakout increases to over 80% by the end of the sequence and so gives an excellent risk-to-reward opportunity.