Home Trading
Hidden support and resistance is virtually unknown to a majority of traders. Yet this phenomenon is responsible for many of the big trends and corrections that we see play out in markets over the longer time periods.

Getting to know how they work can help in positioning ahead of these moves. 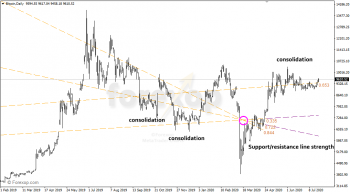 There are several elements that influence the strength of a support or a resistance area.

Historical precedent is one of the most important of these. A general rule is that the longer a support line has been in existence the stronger it will be. This is not so much length of time, but the number of times the zone has been tested by price action.

This makes sense from a fundamental standpoint as well. Support and resistance is often likened to “price memory”. If the price of an asset consolidates around $1 for a while, you have many buyers who bought around $1 and many sellers who sold around $1.

The sellers have quit the market, but the buyers are still invested. Those buyers will want to sell above $1 to avoid making a loss. That makes for support around that price area of $1.

If the price falls below $1, that level then becomes resistance. This is because buyers who bought at that price will use a rise above $1 to get out with a profit. This will depress increases above that $1 mark.

The longer the consolidation around that price level is, the great the number of entering buyers there are. As a result the stronger the support and resistance will be.

This strength calculation can be done with a support/resistance tool as shown in the chart below. 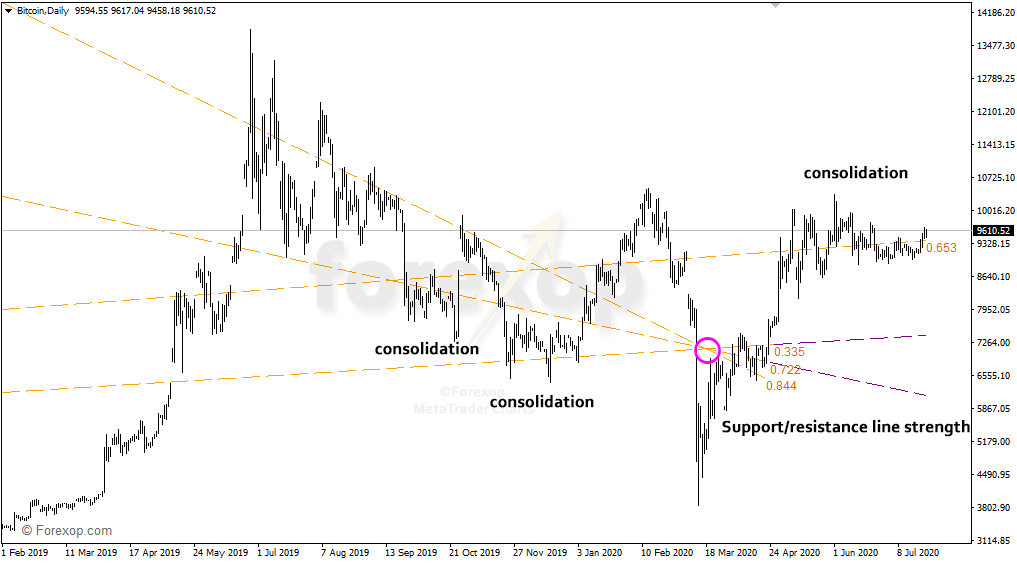 Consolidations areas are much like plateaus on a rock climbing face. Long, well extended consolidation areas form a firmer base. Buying in one of these consolidation zones has a better chance of payoff than does entering in a narrow crumbling peak high up in a trend.

If a new price level hasn’t seen very much price consolidation there’s a much higher risk of a pull back. In a market that’s rising on strong fundamentals, these pullbacks are healthy. They allow new entrants to come in at a lower price, providing more robust support for the next up leg.

This process also shakes out the buyers who came in at lower levels and are now turning sellers & seeking to take profits.

When waiting for the next consolidation, there’s always the risk of missing out on that big move. This is especially risky if the market is going into a parabolic phase.

How far is over extended? There are no precise rules, but there are a few technical tools that help to predict how far the next leg in a rally could extend.

Fibonacci extension & Elliot wave theory say that extensions are ratios. That means, on balance, expect the next extension up to be a ratio of the last. With Fibonacci the important ratios are 38%, 50%, 62% and 100%.

These ratios also work in reverse. When the rally corrects, the next leg down is often a ratio of the previous extension. Many traders work on the rule of a 50% correction of each up leg.  The advantage of this is that it’s simple and works well in most cases.

Working to that rule, if the rally has already extended 50% of the last (or its anticipated distance) extension, it’s better to wait for the correction and consolidation. 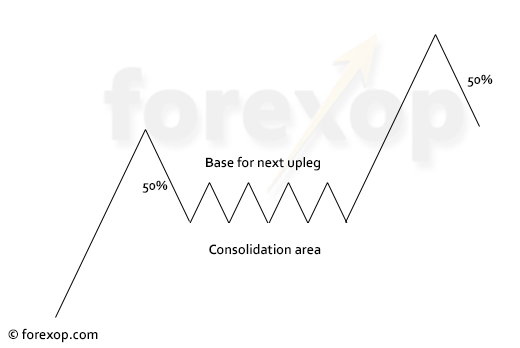 Though these ratios are rarely exact, they offer some good working guidelines for what might happen.

Momentum traders will enter as soon as an up leg has already broken a higher high. They take on the risk that the price may collapse back to the consolidation area.

Whether that risk is taken depends on trading style and your objectives. For a day trader, who’s aiming for rapid, but small profits, it can be an effective course of action. Buy-to-hold traders may want to wait to buy the dip in the next consolidation.

Make use of hidden support & resistance

Most financial markets, especially in the current era are highly correlated. Despite this, many people treat them as independent silos and are blind to what’s going on elsewhere.

Markets are influenced by hidden support and resistance all of the time. That influence is real, but is coming from different markets and for different, but often interrelated reasons.

Some markets are big enough and important enough that they influence everything around them a bit like a massive gravitational field.

Looking at these in isolation there’s nothing unusual about them. That is until you realize that these levels have all been coincident with one another. They’ve all happened at precisely the same time.

Knowing about hidden support and resistances, and importantly when they are approaching can give you a great advantage.

It will give you advance warning about major turning points in the market, or probable consolidation, and pullback phases.

More volatile markets are often the first to break out. In the case of precious metals, when gold was touching 1900 for the last time, silver had already broken out to the upside above its resistance.

With hidden support resistance, the breakout shouldn’t be treated as firm until it’s confirmed by the other markets that are coincident at the same levels. Lone breakouts are vulnerable to corrections.

Sensible use of stop losses

When trading these hidden support and resistance setups, stop losses can be both your friend and your enemy.

Everyone knows that stops are commonly set around key levels; just below or just above.

For that reason, anticipate an increase in volatility around strong support and resistance areas. Prepare for there to be a tug of war between sellers and buyers.

False breakouts, some of which will be powerful, will shakeout many of the stops placed too close to the zone of volatility. But placing them too wide increase exposure to a serious downside correction.

Setting appropriate stops becomes part of the success in this strategy.