What is Wyckoff analysis?

Wyckoff analysis was born out of years of practical study of stock price boom and bust cycles. Its founder, Richard D. Wyckoff was a profound observer of the markets.

He aimed to explain the phases in the markets with a set of simple rules that anyone can follow. Despite his work being over a century old, many consider Wyckoff’s methods to be one of the main pillars of technical chart analysis. 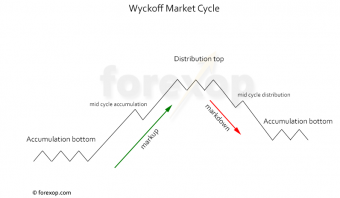 Instead of trying to understand markets as an aggregate of group decisions, as most analysts do, Wyckoff did something entirely different. His idea was of the composite man.

Think of composite man as an evil manipulator sitting behind the scenes controlling markets by pulling levers and pushing buttons. His goal is to perpetually outwit you and move the markets to your disadvantage.

Here are some of Wyckoff’s principal ideas of composite man

In other words, composite man is continually seeking to maximize his profit at “your” expense.

Underlying Wyckoff’s system was his application of accumulation and distribution phases. He used this to explain market cycles in a generic way. The Wyckoff cycle is shown below. 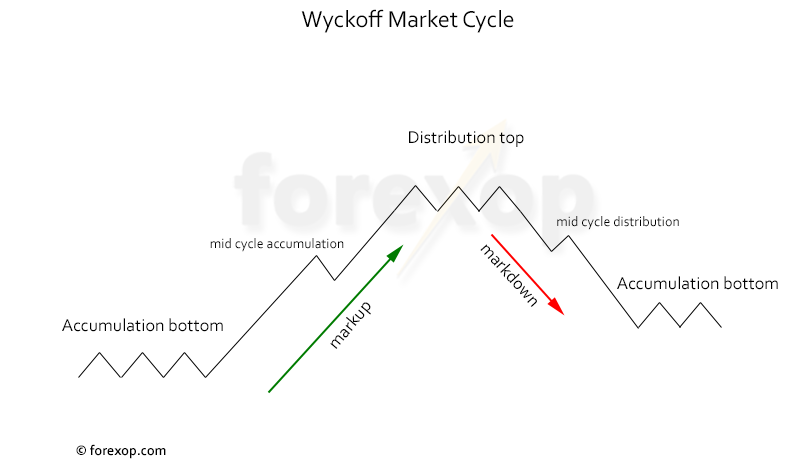 We can identify these structures in many kinds of financial charts.

The Wyckoff phases show us when the “smart money” is either in accumulation or distribution mode.

A trader using the strategy will attempt to identify the accumulation and distribution phases well before the markup or markdown phases occur.

The rules of “composite man” say that the market never repeats exactly the same price action. Although supply/demand constraints will cause market cycles to repeat in a similar way, they will do this with an infinite degree of variation that will make detection as challenging as possible.

That means while the general structure will be the same, the durations and sizes of distributions, accumulations, markups and markdown trending phases will be different. This is the composite man’s attempt to obfuscate his real intentions and deny you an easy profit making opportunity.

Rule 1: Price action is determined by supply and demand. While this rule seems entirely obvious, deep learning of supply and demand dynamics is a fundamental part of the analysis. The Wyckoff method uses several tools towards this end, namely point and figure charts, price-volume analysis, and reference to the market cycle.

Rule 2: Use cause and effect to identify accumulation and distribution phases. A more basic understanding of this rule is the general principal that the longer and deeper the accumulation phase is, the more powerful the breakout trend, “markup phase” will probably be.

Rule 3: Effort versus result can signal trend reversal. A simplistic interpretation of this rule is to identify divergences between volume and price action. As an example, consider where there is a high turnover of volume but little resultant price action. Wyckoff’s 3rd rule says that this is likely to be a market turning point because it suggests an exchange between smart money and dumb money.

A Wyckoff strategy can be broken down into a few simple steps.

For the long side:

Wyckoff’s chart pattern is useful in identifying these phases. The chart below shows the schematic for an accumulation bottom. A distribution top is simply the mirror image. 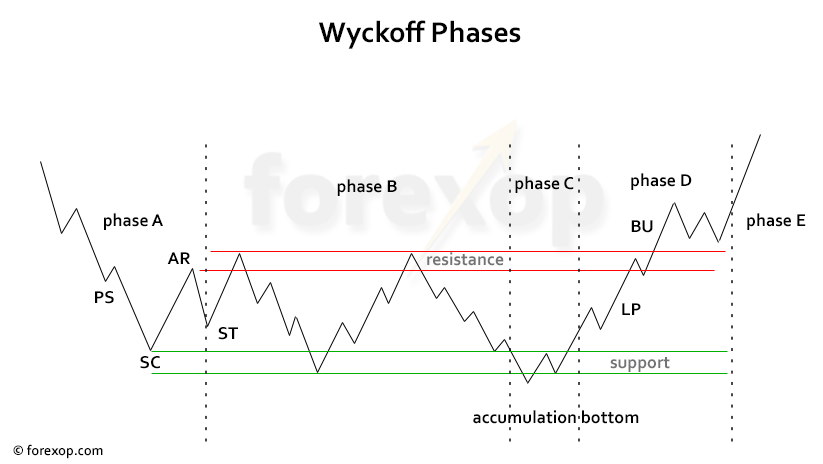 The Wyckoff cycle starts with A, the descent from a distribution top. This is the markdown phase where the big money starts offloading shares to the crowd. Phase A marks the steepest price descent which is the markdown period.

PS is the first point of support in the descent. At this point, a minor reversal and accumulation may start, however further falls are likely. PS is generally considered a fakeout in the Wyckoff model.

SC, the selling climax represents the point of capitulation of the crowd. This is where sentiment is deeply negative, as the crowd anticipates the bottom dropping out of the market.

AR is the automatic rally. At this point, smarter money steps in to buy the dip pushing the market back up in a corrective wave. This rally will usually be less than a 50% retracement of the distribution top. Meaning the price will still be considerably below the previous highs.

ST marks the end of phase A. Phase B starts with a retest of the previous low, where the market will push down again trying to find a bottom. ST may be at or below the selling climax (SC), but generally will be above it.

Phase B continues with at least one more rally where the price tests the previous high reached at AR. This area now forms strong resistance and will tend to keep the price confined to a trading range during the accumulation period.

Phase B will often culminate with a retest of the lowest support line. At this point, the price may reach the lowest point in the cycle. Most of the retail crowd has long since capitulated by this time. This is where the big money is accumulating heavily.

LP represents the last point of support. By this time, the price recovery is well underway. The price will test the upper resistance lines of the trading range and rebound upwards.

BU is the backup rally where the price starts to accelerate sharply to the upside as the general investor starts to enter the market again. This represents the markup phase.

To see a real world example of Wyckoff analysis, we can look to the weekly gold price in US dollars between 2012 and 2020. Here we can see that the price is forming a long distribution top between late 2011 and 2013. The point of support, PS is reached in 2013 and this triggers a very small rally off the lows. A few weeks later the market reaches SC, the selling climax.

This steep fall triggers a much more substantial automatic rally that takes the price up again to form a first line of resistance at AR. Gold then trades sideways for much of the next 5 years as predicted by Wyckoff’s system.

Phase B contains another drawdown, followed by a recovery rally where price is held back again by the upper resistance lines. The lowest price occurs late in phase B.

Finally, breaking through the upper resistance line, phase D ends and phase E begins. This is the backup phase and is where the price enters a parabolic rally.

Significant accumulation and distribution periods can occur over periods of months, or even years as is the case for gold above.

Notice that gold forms a single bottom, cup and handle formation. Other patterns are common including

All of these are valid Wyckoff patterns. The basic structure of an accumulation bottom will usually be very similar. The important point is to identify the start of phase B and from that determine the whereabouts of the lower support and the upper resistance that forms the price trading range.