Trends are all about timing. If you time them right you can potentially capture a strong move in the market. Time them wrong and you’re likely to be caught in a correction that greatly reduces your chances of making any profit.

Trend lines are everywhere in forex pairs. They appear at all time frames. Yet profiting from them is far from easy. In this article, we’ll show two different trend following strategies and look at how to avoid common failings.

When to Enter and Exit a Trend Trade

The ideal scenario is to time the market so you’ll enter exactly as a trend starts and exit as the trend finishes. Yet unless you can see into the future this is near impossible. It’s better to accept from the outset that you’ll give up a bit on the entry and on the exit.

This is always true because in order to identify a trend in the first place, the market needs to start moving in a certain direction.

So the key to trend trading is firstly to identify that the trend is established. Then secondly to identify suitable entry and exit points.

When you trade a trend, you have to either take a long term or a short term view. Taking a longer term view you can attempt to “ride” a trend for as long as possible. Buy and hold if you like.

Alternatively, with a short term approach you can “scalp” smaller profits by entering and exiting at tactical points using a swing trading system. There are pros and cons to both. 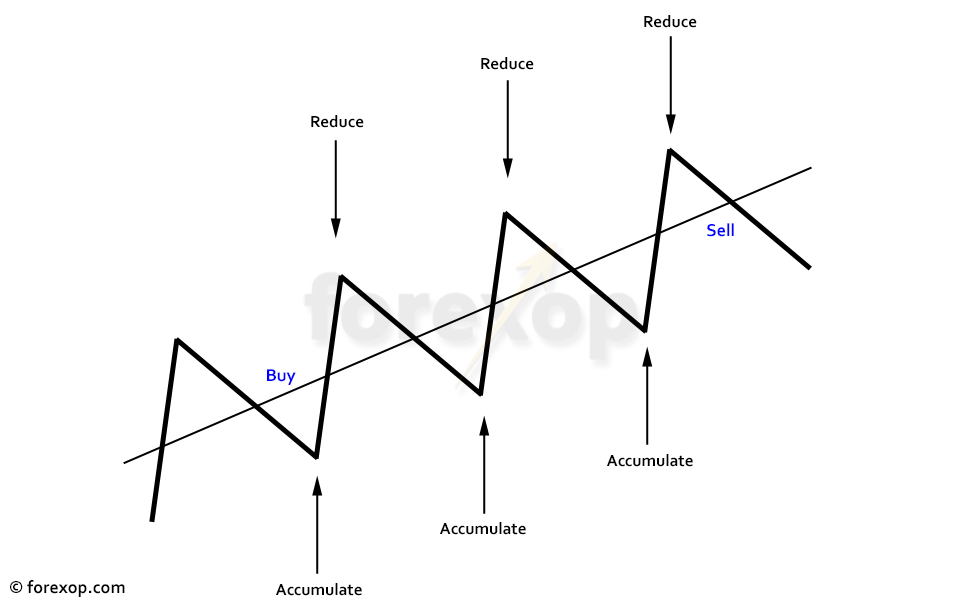 By taking a longer term view you reduce costs, and account turnover. It reduces the time you need to watch the market. Shorter term strategies are higher risk but also higher reward.

Figure 1 shows the difference between the two styles. In any uptrend, the short term trend trader buys, or accumulates his position, at dips in the trend. He sells (reduces his position) at the peaks. In a down trend, it’s the other way around. This is the theory. However timing these entries and exits is no easy task.

With this trend trading style, you can use the moving averages. The simple moving average (SMA) and the exponential moving average (EMA) both have their uses. The EMA is usually preferred though because it gives more weight to more recent moves in price. The next step is to examine crossovers in two moving average lines.

When the fast EMA cross down through the slow EMA it means the price is accelerating down faster than the average rate of the trend. As defined by the slow EMA. On the other hand, when the fast EMA crosses up through the slow EMA, the price is accelerating up at a rate faster than the trend average. The turning points in the lines are also useful. Using this kind of simple analysis, you can estimate where the peaks and troughs are happening with some success.

Trying to time the peaks and troughs in a trend is risky because it’s prone to mistiming. Oftentimes, what was planned to be a quick in-out trade ends up in drawdown because the market timing was wrong.

If the market is trending, then why even try to scrape a few extra pips by timing the swings in the trend? A longer term trend following strategy might not be as exciting but it’s far more likely to yield profits.

With this second trend following system, you gradually increase the position as the trend develops.

For this we use a trend line detector. The strategy is as follows:

To make sure the trend is established, we look for some additional evidence. For example, the chart in Figure 2 shows the forex pair, EURUSD (H4). On this chart, the main bearish trend looks like it is turning.

At point (2) a new trend line has formed. It’s first identified at the arrow. This one carries on for some time and it does crossover the moving average. This gives a stronger confirmation than the earlier trend line. It increases the chance that the bullish breakout will carry on further.

The fact that the earlier trend failed increases the odds this second one will play out since the crowd will be anticipating a repeat of the earlier pattern. The buy orders are placed at the red circles.

In trend trading, it can be tempting to apply too much leverage and then try to control risk through tight stop losses. This approach nearly always ends badly. It’s far better to use smaller position sizes where losses can be managed.

The stop losses that you set must be wide enough to allow for volatility around the trend line. The volatility in forex pairs can change very suddenly. So take this into account when deciding position sizes. This is done together with the amount of risk you’re willing to accept on each trend. Read more on money/risk management here.

Trends have a habit of collapsing as soon as they’re obvious and the crowd starts to get involved. To exit the position, you can set a fixed profit target. Or just try and ride the trend until it ends.

With the latter method you’ll need to monitor the market continually to look for early signs that the trend is reversing. To do this you can look for any kind of technical signal such as crossovers, divergence signals, and candle-analysis. It also means asking if the trend is now “recognizable” to the layperson. If it is, it’s due a correction.

Trying to stay until the end of a trend usually means giving up a hefty amount of profit if the position isn’t closed before the main correction happens. With the other approach, if the profit target is too small you risk getting out of the trend too early and missing out on profits.