Home Technical Analysis Candlesticks
Reversal patterns are an important tool for timing the end of trend. One such pattern is the engulfing candlestick. 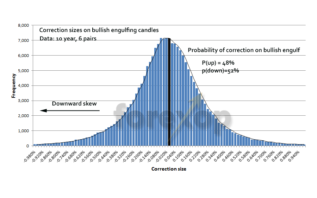 In order for any chart pattern to be useful we need to know its limitations. So in this article I’ll look at how reliable engulfing patterns are by testing on a group of forex pairs.

What is an Engulfing Candle Pattern?

Let’s first look at what an engulfing pattern looks like. A bearish engulfing candlestick is shown in the diagram below. It’s forms when the current candle completely “engulfs” the candle before it. 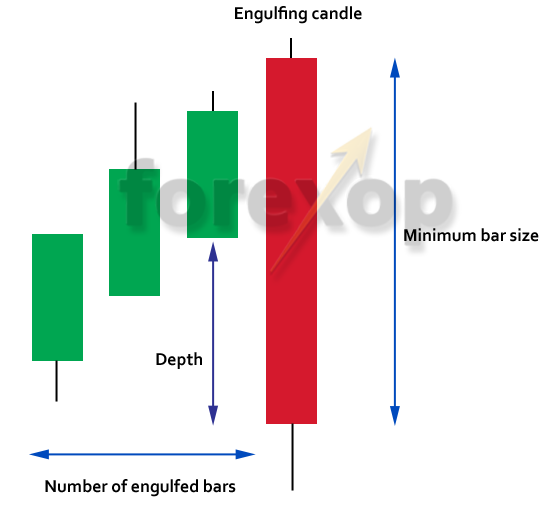 There are a variety of ways to separate weaker from stronger cases. With a stronger pattern, the engulfing candlestick can “engulf” multiple trailing candles. The length of the engulfing candle can also be used as a filter as can the “depth”. Smaller engulfing candles are seen as less likely to signal a strong reversal. Resistance and support areas are also useful in deciding which to trade and which to ignore.

The question I am trying to answer here is how reliable are engulfing candles are as basic buy/sell signals.

To do this I will look at the currency majors to find all engulfing patterns over a ten year period. I’ll then measure the market fall or rise if there was one just after the signal appeared.

By doing this we will see if this pattern can be profitably traded – or if trading it is no better than flipping a coin.

To start with I’ll define how I will measure the size of a market correction.

To detect an engulfing candle, both the open and close levels must be known. In other words the candle must be complete. This means any detection will lag by one bar at least. Therefore the earliest point at which a trade can be executed is at the open of the next bar.

To measure the correction I use the following values:

The correction size is then: 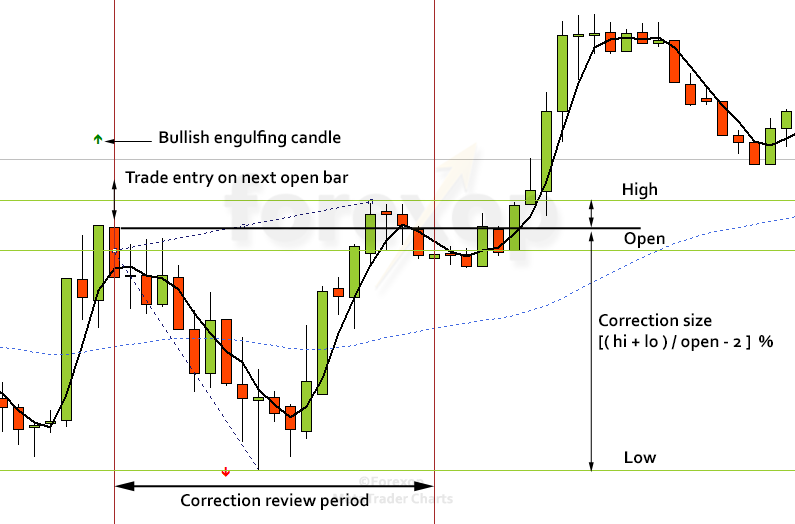 Figure 2: How the correction sizes are measured © forexop

The “correction review period” is the number of bars ahead of the engulfing bar over which the correction is measured.

The results here are for the M5 chart (five minute bars) because it contains the most data. I did some tests on other time frames up to D1 with similar results. So the results I refer to below are for the five minute chart. There is a lot of variation over different time frames and currencies but here I just want to see the averages.

The correction review period was 30 bars. I chose a narrow window to measure the correction size to make sure the effect was due to the engulfing candle and not some other event.

The tests use a Metatrader engulfing bar detector to find the signals. You can freely download and use this indicator for yourself. I set the minimum threshold engulfing candle length to 40 points and I set the minimum number of “engulfed bars” to 1 bar and depth to zero.

Again I played around with these settings but found similar results. So for the sake of brevity I haven’t included variations with different data or settings.

Going through every point in the data, I classified each bar as follows:

I then aggregated all of the results into one data set covering the ten years’ worth of data for each pair. So the whole set includes over five million individual candle measurements.

I include the random case so that the results of the engulfing patterns could be isolated from any background trending bias.

Figure 3 below shows the distribution of corrections following a random candle (case 0). The results are highly symmetrical and normally distributed. This is as expected. The black bar shows the zero point – correction size 0%.

This is coincidental. There were more downward corrections than upward just because of the period that was covered and the currency pairs I looked at. So just by chance there would be a higher probability of picking a candle that resulted in a downward correction. This effect has to be removed.

The trend bias was normalized out of the analysis by shifting the distributions. We should then be left with data that shows the reliability of the engulfing bars on their own. The normalized data for the whole set is shown in the table below:

The histograms for both cases are shown in Figures 4 and 5 below. Again the black bar shows the center line. The histogram for the bullish pattern is skewed to the left. This means a downward correction is more probable following this candle pattern.

The histogram for the bearish pattern is the mirror image. It’s skewed to the right. This means an upward correction is more probable following the bearish engulfing candle. 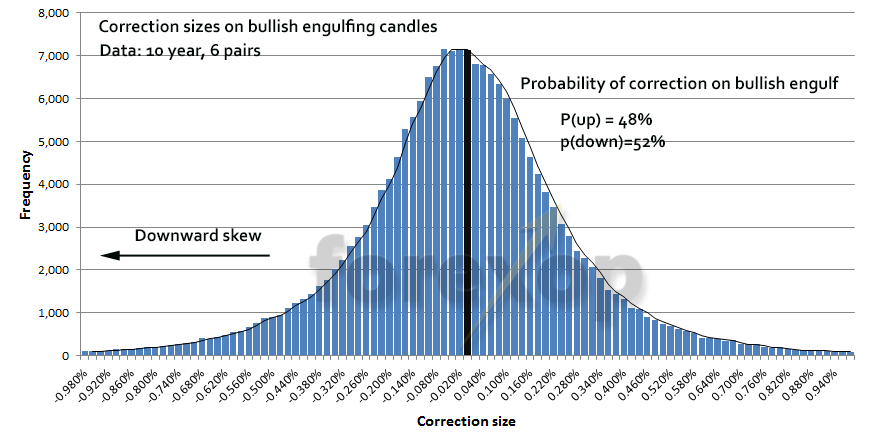 Based on this experiment, the bullish engulfing pattern seems to be a slightly stronger signal than the bearish. With both being contrarian.

When looking at individual currency pairs the results were strong and consistent enough that this doesn’t seem to be fluke of the data. It doesn’t appear to be skewed by outliers. Some pairs were stronger and some weaker. But all pairs tested individually show the same result as the whole set.

The table below shows the results for the bullish engulf pattern on specific currencies.

The table below shows the results for the bearish engulfing pattern on the respective currency pairs.

The arrows show the two modal points for the two distributions.

Figure 7 shows the same diagram but for GBPUSD. Again the result is broadly the same as it was for other currency pairs.

All experiments I did showed a higher probability of the market moving in the opposition direction to that predicted. There weren’t any pairs or setups where the conventional trade worked.

The stronger the engulfing signal, the more contrarian it was. At least to a point. So stronger patterns, as measured by size and depth, were more likely to signal trend continuation and not reversal. This might be because stronger ones tend to have more pullback just afterwards where the market gives up some of the move.

The features of the candle itself don’t seem to be enough on their own. So when using engulfing patterns as buy/sell signals we need to use other confirmations as well.  For example, it’s probably a good idea to combine the analysis with other techniques like trending and checking support and resistance lines. And possibly we should be looking at some engulfing candles not as signals of trend reversal but of trend continuation.