When looking for a reversal in a forex pair there are a few pointers that we can scan the chart for. One of these is the bearish engulfing candlestick. This pattern can appear anywhere in a chart. But many traders use it as a bearish marker because it’s often seen at trend peaks or near places where the trend corrects downwards briefly.

Definition of the Bearish Engulfing Candle 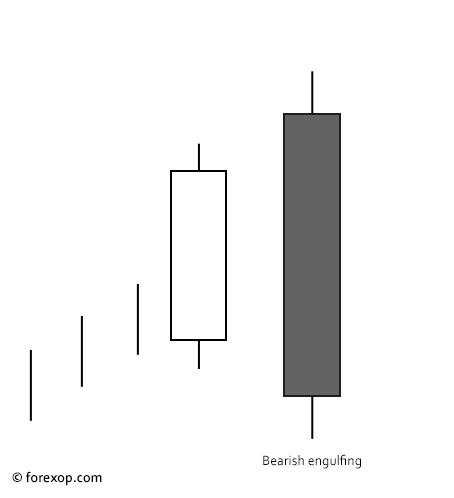 This means the opening level of the black candle should be at or above the close of the white candle. If the black one opens above it, that means there was a gap between the close/open prices. Price gaps often happen over weekends or when the price is moving quickly.

This candle pattern highlights points in time where market sentiment flipped from bullish to bearish.

If you’re using engulfing candles as your main signal, I suggest reading my other article first. It looks at the reliability of this pattern based on real chart data.

In summary, what it shows is that if you’d blindly traded the bearish engulfing candle in forex over the past decade, you’d probably have done slightly worse than if you’d traded on a coin flip.

Nevertheless this isn’t to say that engulfing candles aren’t of any use. When using them, as with most charting techniques, we need to add some human judgement. Then and only then make a decision on which events to trade, which to ignore and which to counter-trade.

Looking at the Entire Chart

Unlike a MACD signal or moving average line, one candlestick will only give you a snapshot of market sentiment at one single time instant.

Candlesticks, by their nature are “noisy”. Single candlesticks, especially at lower timeframes can often be false signals. They are more a feature of supply and demand at a given point in time.

We therefore should use the bearish engulfing pattern together with other indications to get a broader idea of what is going on in the market at that particular instant. We also have to be ready to use it as a contrarian signal.

Salient factors to look for

When trading the bearish engulfing pattern there are certain salient pointers that we can use to help understand what the market is doing. These include:

Take the chart in Figure 2 as an example. This shows a strong bearish engulfing candlestick in the red box. Three features make this more salient than others:

These are just a few examples of salient features that can help separate the weaker patterns from the strong ones that are more likely to lead to profitable trades.

If you use Metatrader you can use a trendline indicator combined with the engulfing candle detector to help with the analysis. Both are free to use.