Home Technical Analysis Candlesticks
A spinning top is a Japanese candlestick pattern that denotes indecision in the market, usually at the end of a trend. It can warn of price reversal.

The spinning top is identified by a narrow, but not completely flat, candlestick body and an upper and lower shadow of nearly equal size. It is a common pattern that can be found at any timeframe. 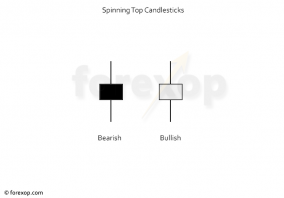 The spinning top is very similar to a high wave pattern. The difference between the two is the shadow length.

If the shadow length is long, at least twice the body size, the pattern is usually classed as a high wave.

With a shorter shadow, it is classified as a spinning top. A spinning top should be nearly symmetrical, with similar sized upper and lower wicks.

Another closely related pattern is the doji. Unlike the doji, a spinning top does not have a completely flat body.

The main identifiers of the spinning top are:

Like the high wave, spinning tops often form in clusters in areas of consolidation. These can be local trend tops and bottoms.

A spinning top usually marks exhaustion after a period of upwards or downwards price action. The narrow gap between open and close price means that no headway was made during the time period of the candle.  The long upper and lower shadow indicates a great amount of volatility occurred during the period, but with neither bulls nor bears showing dominance.

Therefore, a spinning top can signal a flip from bullish to bearish or bearish to bullish sentiment. The usual cue for the direction is the candlestick body. However, most traders use other confirmations, including the trend that the pattern is forming in, as well as nearby support and resistance.

If one of the shadows touches a support or a resistance line, or even breaches it temporarily, this will add weight to the case for a reversal.

The chart below, EURUSD weekly, shows a group of spinning top patterns occurring in a shallow uptrend.

This is why other confirmations are necessary. One trading technique is to treat the patterns as a short term reversal of the preceding candles. It is also useful to check if the pattern is meeting local resistance or support. This is easier if the price is trapped within a narrow range.

The above chart for example, shows weekly Ethereum. These patterns appear in a narrow price channel as the price consolidates.

Reliability of the spinning top

To measure the reliability of this pattern we tested it across several asset types over multi year periods.

The daily chart was measured on a twelve year period. The size of the draw-down and draw-up over the 15 bars following each spinning top signal were examined. The signal was classified as a bullish true positive if the price high watermark size was greater than the price low watermark. Otherwise it was classified as a false positive.

On EUR/USD the bullish pattern appearance was more reliable with a 57% success rate, and a small average profit of 0.4%. The bearish pattern was no better than random in our tests.

GBP/USD was slightly better with success rates around 52% for both bearish and bullish signals.

The bearish spinning top proved to be unreliable in stock charts, where there was a strong uptrend. As the table below shows, Alphabet (GOOGLE), the bearish signal showed a failure rate of over 72%, along with an average loss of -6.5%.

The opposite was true in strong downtrends. Here bullish spinning tops are better predictors of further trend falls rather than trend reversals.

In cases of strong trends, it is sensible to use other confirmations such as trend and support/resistance areas. 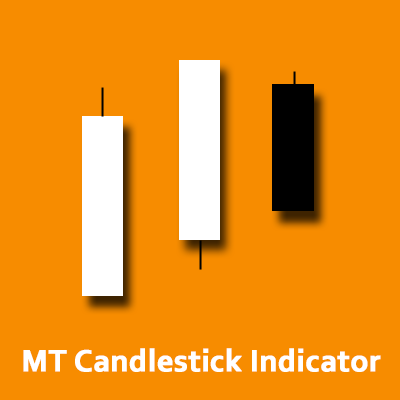