Home Trading
In an era of instant financial news and social media updates, an abundance of information is freely available to us at any given time. All of us rely on information to make sound trading decisions. But is there a point where too much information can actually be a bad thing? 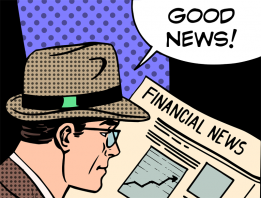 An experiment carried out by Paul Andreassen in the late 1980s sheds some light on this.

Andreassen’s experiment took a number of volunteer MIT business students and separated them into two groups.

Each group of students was allowed to trade their own chosen portfolio of stocks. The goal of each student was to maximize his or her profits over the course of the experiment.

Both groups were able to see the stock price changes. However, the first group was given full access to news flow for their chosen stocks. The second group was not given access to any news reports at all. This group had to make their buying and selling decisions entirely on price dynamics.

When the performances were totaled up, the group without access to news reports on average did far better than those with access to news. On average, their returns were twice that of the better informed group.

What does this tell us?

How can it be that the lesser informed traders did better than those with access to more information? This seems to go against common sense.

There are a few tentative explanations for these results.

Financial news reports are emotive and play on the hopes, greed and fear of their audience. On the other hand, technical analysis is dry and unemotional.

The technical traders were thinking more critically and more independently. They were less influenced by hysteria, hype and undue excitement that the barrage of news flow was creating.

2) Reporters overplay the significance of their news pieces

Reporters are inclined to sensationalize trivial events and make them seem far more important than they really are. When a stock price is falling and is accompanied by a narrative of negative news reports, this can intensify the drop in price. In turn this seems to validate the reports and give them more importance than they really deserve.

In other words, the news reports were moving prices rather than the facts. They were creating their own volatility. The tail was wagging the dog.

The news pieces were biasing investor opinions in favor one particular side of events put forward by the reporter.

Investors took the news to be authoritative, assuming that the reporters must have better insight than they did.

In actuality, much of the data had little relevance to the stock’s valuation or was already priced in by the time it was reported by the media.

But the news narrative seemed to give validity and conformation to what was happening on the chart. This influenced investor decisions, and not in a good way.

Confirmation bias happens when investors subjectively accept news that confirms their beliefs and ignore everything else. In depressive markets surrounded by negative news flow, almost any news, including good news, has a negative price impact. In manic markets, the opposite is true.

Investors immersed in news narratives were less likely to profit from price distortion opportunity than were the chartists.

Even when good news appeared, they dismissed it if didn’t fit their doom and gloom narrative.

There is an asymmetry between good and bad news. Research shows that bad news has a disproportionately negative effect on price. On average, bad news causes twice the volatility of good news.

This may be because the media is inclined to sensationalize bad news and give it a higher priority.

A torrent of news flow can trigger investors into taking action that they wouldn’t otherwise take. This for example, can be buying tops or selling into crashes. Emotive and high-adrenaline financial news in of itself creates higher turnover, and high turnover is strongly correlated with poor returns.

In fact, some critics of Wall Street would say that this is the hidden agenda of the financial news system. To perpetually talk the markets up or down in order to create interest and trade business.

So what can we do?

So should we abandon all news and focus instead on technical analysis and charting? Not exactly. The lessons from the above warn us to be more selective about information that we use. Here are some easy tips for avoiding information overload.

Focus on the macro picture

We should all recognize that much of the day to day financial news is no more than noise. Developing your own macro-economic outlook will allow you to be more selective and confidently ignore the many day-to-day distractions that the financial news media will throw up.

We all have reasons for making our investment decisions. If that reasoning is still sound, and the fundamental outlook hasn’t changed that will help you to move confidently through some short term negative circumstances. In the long run, these events often turn out to be no more than minor speed bumps along the way.

Devote a certain time of day to digesting news and separate this from your normal trading activity. By separating these two undertakings you should be able to look at the news more objectively.

Some money managers go even further than this and move themselves out of financial centers altogether. They do this to avoid being contaminated by the constant hubbub of news updates and succumbing to “groupthink”.

Try removing flashing news tickers and other distractions from your trading terminal. It’s surprising how these small changes can clear the mind and allow you to focus on the real price dynamics.

Most news pieces contain a mixture of fact as well as journalistic opinion. This is inevitable with human writers. With any market moving news, it’s important to look for other angles on the story. These may present the facts in an entirely different light. Gaining several opinions is far better than relying on the viewpoint of one source.

One group of researchers did a study of stock price movements immediately following news releases. They broke the data down by media outlet, and by time of day. What this research showed is that some mainstream media sources are strongly correlated with positive spin and therefore price rises. Whilst other media sources correlated highly with negative spin, and price falls.

It is said that bad news sells, good news doesn’t. This can help us to understand and see through some of the spin we find in financial news reporting.

Look at some older news pieces dating back a few years. You’ll no doubt find countless examples of reports foretelling the demise of a company, economy or the entire financial system itself.

While we shouldn’t completely ignore such reports, we need to treat them with healthy dose of skepticism.

Learn to profit from the news media

Once you accept that many news reports distort markets and push them away from fair value, it will allow you to recognize and profit from these moves when they arise.

These can be good trading opportunities.

As mentioned above, negative news, on average, causes double the amount of volatility as good news. To compound this, by the time something appears in the mainstream media, that “information value” is often already priced in anyway.

There are important exceptions to this such as central bank announcements and other economic data which are made public to a precise deadline.

The overall consequence of this is that there are frequent push backs after the news, in the opposite direction. This doesn’t mean we should be trading against every news release that comes about. Each event needs to be treated on a case by case basis.

With financial information, quality and interpretation matters a lot. It’s been shown that exposure to a constant hubbub of media reports is not beneficial to trading profits. In fact, it does more harm than good. This appears counter intuitive to the common belief that more information is better.

Knowing this can help to put the news pieces we see each day into perspective.