Home Strategies Contrarian
It is now less than 10 days until the UK’s Referendum on its membership of the European Union. This momentous event in global markets has the potential to turn into a unique trading opportunity. Brexit offers some unique opportunities for the contrarian trader & in this article I’ll explain why and how I am trading against the crowd. 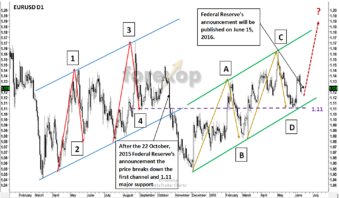 Trading opportunities around the UK's possible exit from the European Union; Brexit © forexop

Economic and financial implications of the vote are widely covered and lots of research is available via financial institutions and on the web. Betting odds this morning are forecasting a 62% probability in favor of the UK remaining in the EU and a 38% probability of Brexit.

In an effort to provide something unique to Forexop.com readers I decided to share with you one of my trades that I have already done on my personal FX trading account. In this post I will present a contrarian trade on EURJPY and the logic behind it.

If you haven’t read my previous post on contrarian trading, I would suggest having a look at it before moving forward here. It will give you a sense about my definition of contrarian trading and my underlying philosophy.

Since EURJPY is a cross rate, before discussing factors related to it, I am going to look at EURUSD and USDJPY. I will discuss technical factors, which will provide support that “the Crowd” is selling both EURUSD and USDJPY and that the Brexit is a good time to go against the Crowd by going long EURJPY.

EURUSD: Reasons for the Crowd to sell EURUSD and for contrarian to buy

If you take a look at Figure 1 you will see there are two very similar parallel channels on the EURUSD chart. The similarity is due to the following factors:

After the Federal Reserve’s monetary policy announcements between 13-28th of October, 2015 the first channel and level 1.11 were broken down. On June 15, 2016 we have another FED announcement, which could be the start of the opposite movement. Based on this similarity, my contrarian trade idea on EURUSD will be:

This trade assumes the second channel will be broken up and similarity will cease to exist. 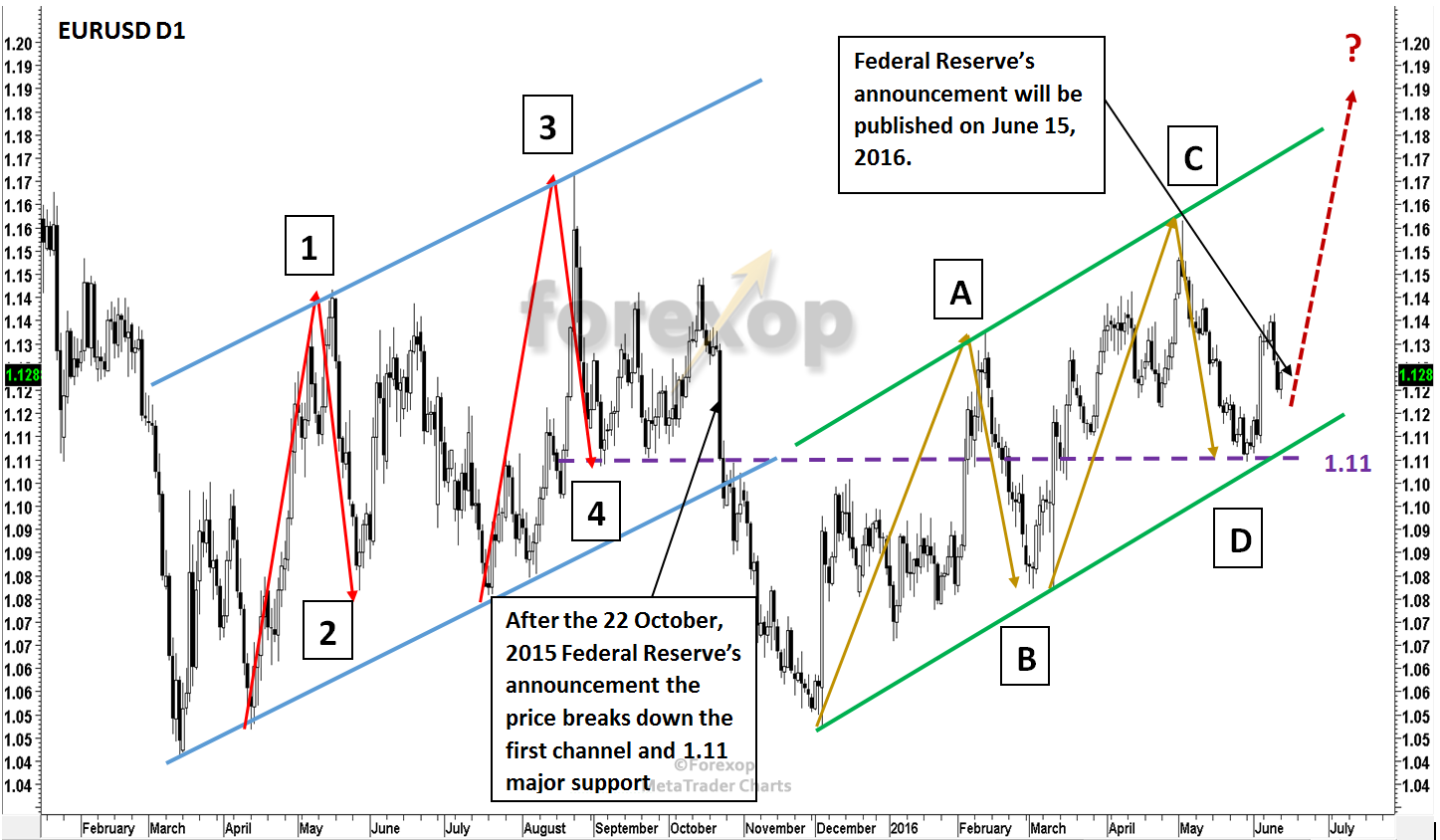 USDJPY: Reasons for the Crowd to sell USDJPY and for contrarian to buy

While USDJPY does not have such beautiful similarities as EURUSD, I think the two patterns circled in green in Figure 2 are still quite significant. As such these patterns will probably attract large shorts from “the Crowd”.

Based on the similarity USDJPY should stop its current downtrend and break up the maximum of the second pattern, which is around USDJPY = 112.0. The stop loss for this idea is around 101, which will give take profit/stop loss ratio of 6/5. Current price is around 106.0. My second contrarian trade idea is therefore: 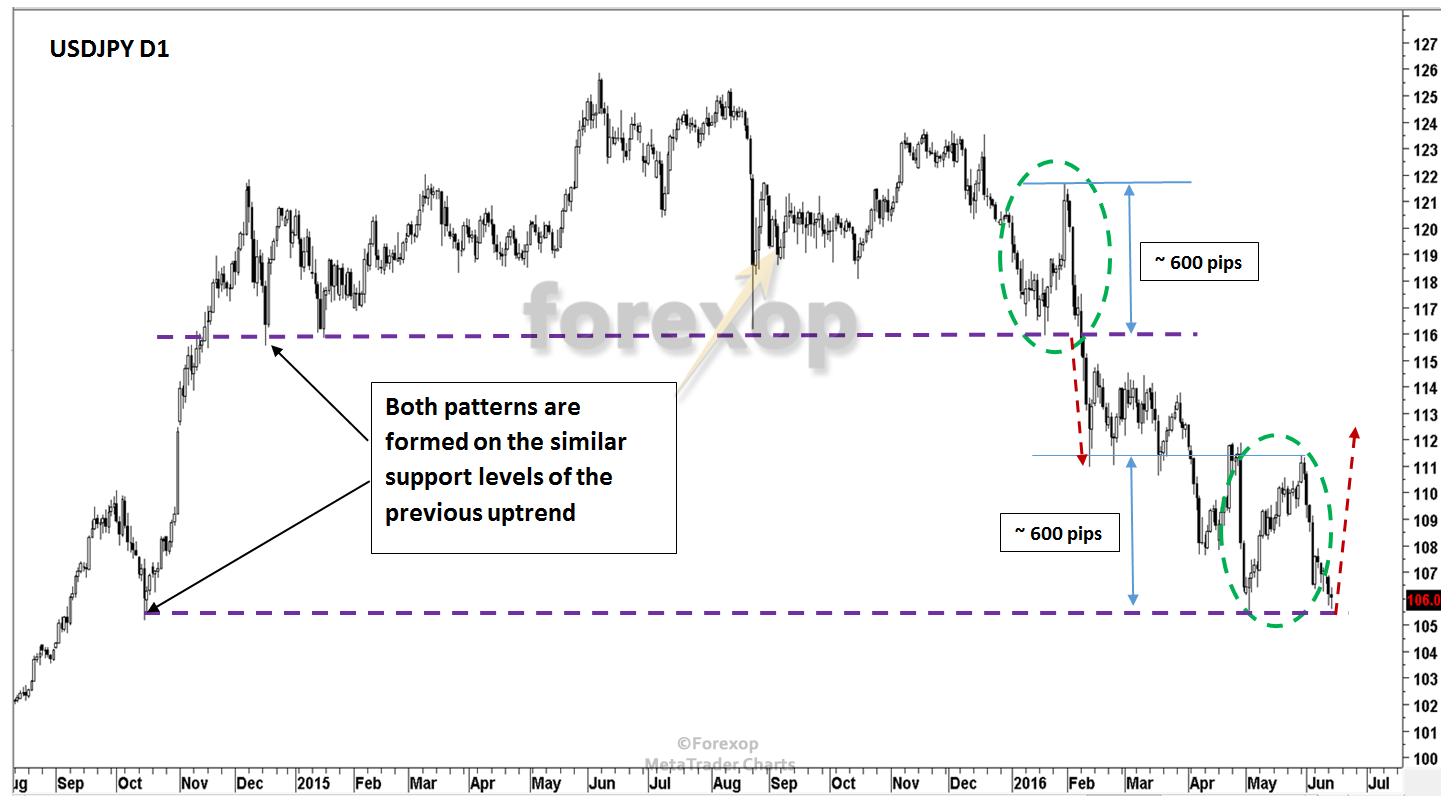 Figure 2: USDJPY support and resistance areas and possible attractor for shorts from “the Crowd”. © forexop

EURJPY: Reasons for the Crowd to sell EURJPY and for contrarian to buy

As I’ve shown in Figure 3 there are 2 unbroken downward slopping trend lines with maximums exactly on the line. On the first line there are 5 maximums and after the fifth maximum we have a big down wave, which continues up to the current point.

For the second line we already have 4 maximums, and because the second line is steeper, the price should meet it for the fifth time very soon. Once this happens, the Crowd should start to short EURJPY significantly based on the experience with the first line.

Brexit is widely considered as a negative event for the European project and the Euro in general.

In Figure 5, I put an example of similar consecutive medium term trend lines. These happened with EURUSD before the financial crisis of 2008. As you can see after the short fake move from the second line 3rd time, the technical bubble burst and the price broke down all the minimums on the second line.

As shown in Figure 4, on June 26 of last year, which is almost exactly the same month and date as the Brexit referendum, EURJPY experienced two huge gaps. Both EURUSD and USDJPY gapped down due to Grexit related risks. For EURUSD the explanation was that Grexit is bad for the European project (and by extension the Euro).

For USDJPY, the explanation was JPY’s safe haven status during the turbulent market conditions. Both explanations are existent today:

Based on the above similarity, market participants consciously or subconsciously will expect the same type of movements for EURJPY during the Brexit.

The ideal trade for EURJPY will be to wait until the price meets the second line fifth time and then open a contrarian position betting that that the bubble will burst. I’ve marked this in Figure 4 (blue ellipse). However, I decided to open part of the positions based on this factor now since later the stop loss/take profit ratio may not be as attractive as it is now. 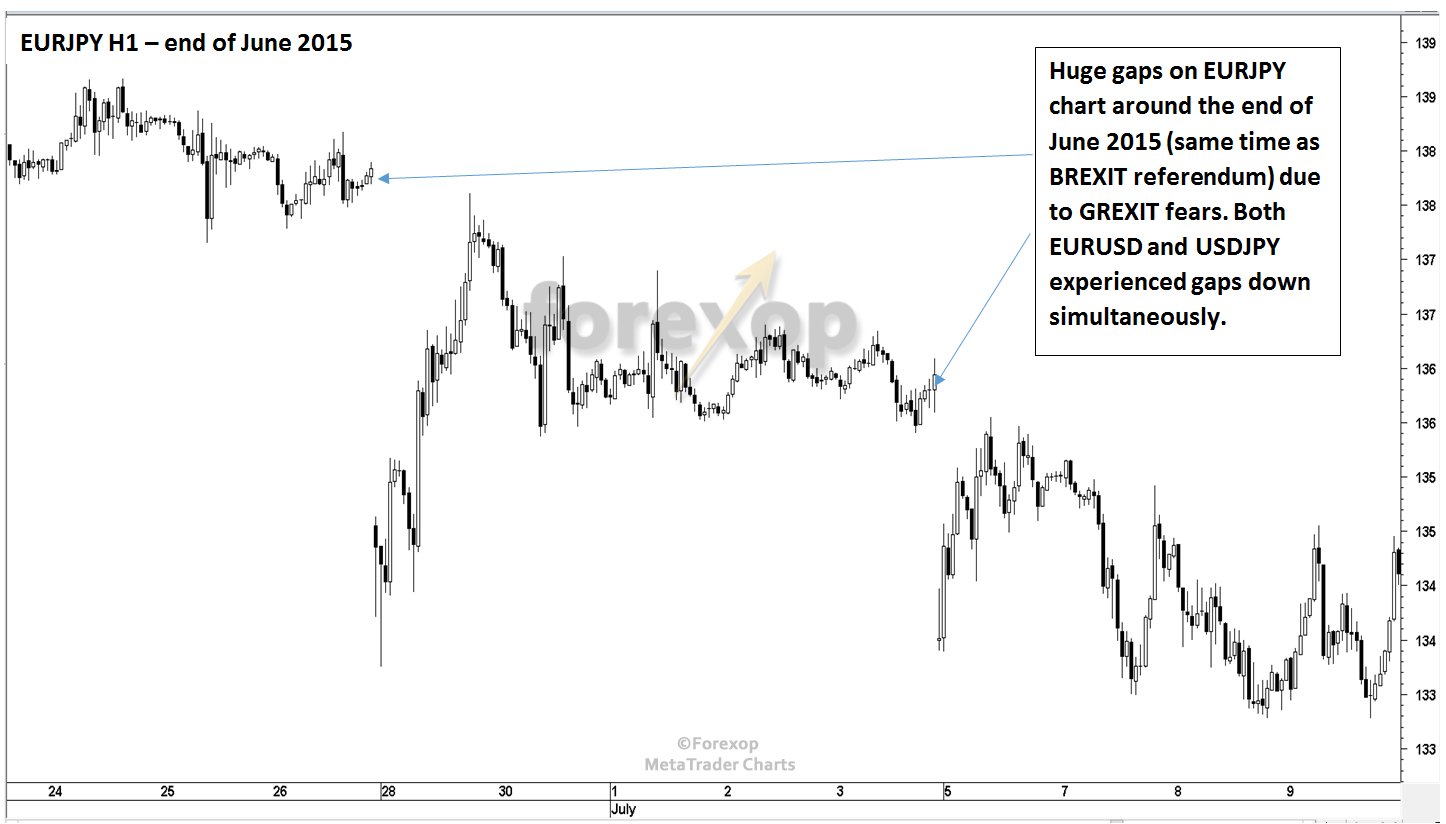 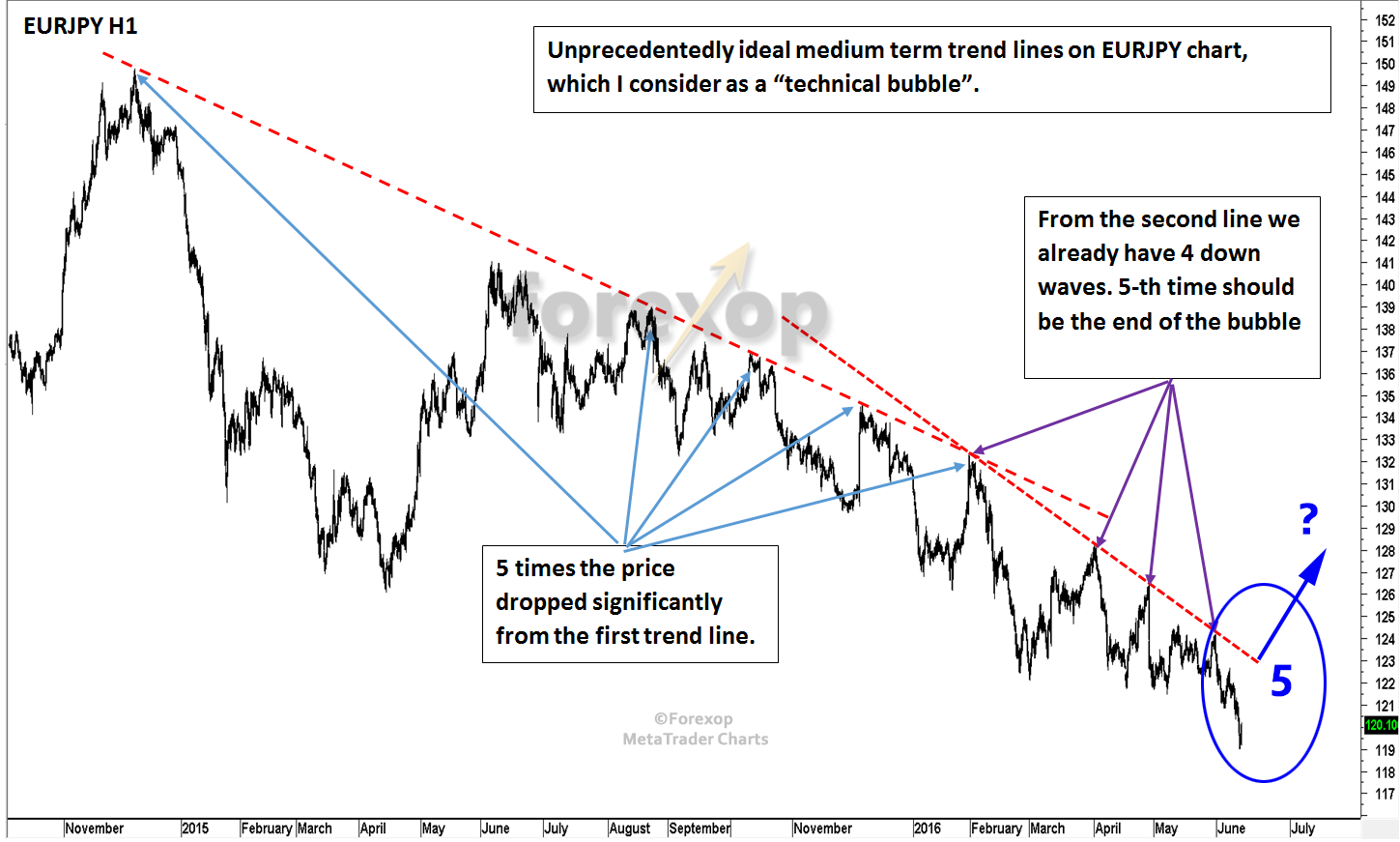 Figure 4: Unprecedentedly ideal medium term trend lines on EURJPY chart. Is this another technical bubble in the making? © forexop 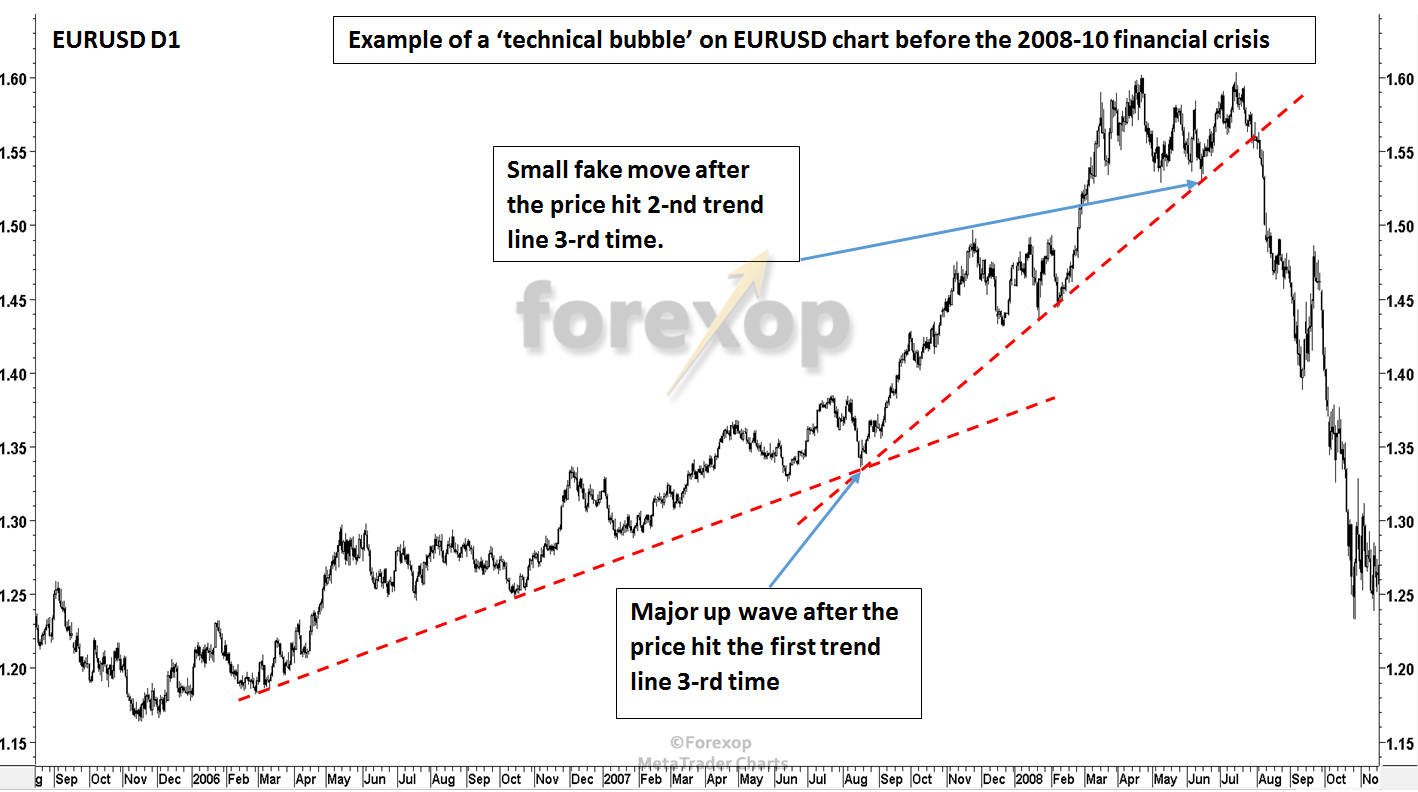 Figure 5: Example of a technical bubble on EURUSD chart before the 2008-10 financial crisis © forexop
Continue...
5 Comments