Home Strategies
If you’ve ever tried to trade on the economic calendar, you’ll know just how demanding and frustrating it can be. In fact, many avoid trading altogether during these times. They stay out of the market or hedge their positions – just in case the unexpected happens. 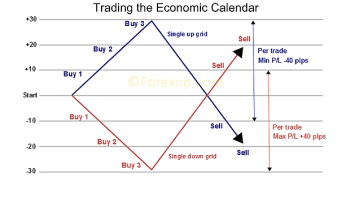 Who can blame them? With surging volatility, whipsaw price action, and increasing spreads too boot it’s enough to scare all but the most determined.

Why is it a challenge? Firstly, most of the technical indicators that forex traders use as pointers tend to break down around these events. Support and resistance levels can be “blown through”, trends reverse, and the technical overbought and oversold signals become useless.

The second and more perplexing challenge is that the impact of news can vary drastically according to factors such as:

If sentiment towards a currency is positive, a good number tends to re-enforce this and can add fuel to a bullish trend. When the market is in this “frame of mind”, negative news tends to be ignored or downplayed – unless it fundamentally changes the underlying story.

On the other hand, when there’s widespread negative sentiment towards a currency, bad news becomes the rule. The market has already factored in lower expectations, and more of the same has less chance of spooking traders.

One thing you often hear news traders say is this: “I made the right call but the market moved in the wrong direction”.

“Failed breakouts” are very common around these events. New information may cause the market to move above or below key levels for a short time – but these moves often reverse and frustrate all those traders caught on the wrong side (see more on breakout trading).

The initial move happens in the seconds to minutes after a release. But as more traders and analysts have time to digest the news, the wider “consensus market view” kicks-in and the market stabilizes. See Figure 1. 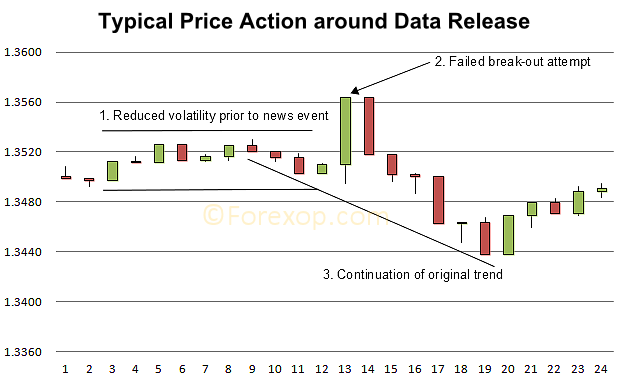 Figure 1: Typical price action before, during and after a news announcement. © forexop

The first group of traders, those who react within seconds of a release, often don’t have time to digest the information properly. They take it at face value in the hope of “beating the crowd” – and trade in the “obvious” direction. E.g. bad economic data means sell, good means buy.

But any new item of data has to be weighed-up against the current economic backdrop and other interrelated factors.

For example, positive economic news out of the U.S may send the dollar lower. The reason being, we’re in a period of increasing risk appetite. So a better macro economic outlook would indicate flow of funds away from “safe haven” reserves such as the U.S. dollar and towards riskier, higher yielding assets.

There are many other situations where the market reaction is the reverse of the obvious, or it just doesn’t react at all.

One reason is better forward guidance and communication by agencies such as central banks and government departments. Because of this, the impact of data is often priced in well before the official release. The “knee jerk” reaction that happens is often an overreaction to news which, in reality, is already “factored into” the market.

Given the above complications, why even try to trade these events at all? Instead of trying to anticipate the market reaction, a more reliable approach for traders is to use a strategy which profits from volatility – basically movement of price in either direction.

One strategy for trading around these events is based on a hedged grid system. You can see my introductory article on forexop here.

This works by setting-up a grid that “straddles” the narrow trading channel that forms prior to the data release. See Figure 1.

After the event, the price generally breaks-out of the channel (in either direction) and whipsaws or trends until a new equilibrium is found. In doing so the price crosses some or all of the grid levels.

There are several grid configurations that can work in this scenario. The ones I’ve found most useful are the “single up”, and single “down grid”.

Single-up grid: This is a trend follower. Trades are opened in the direction of the trend. This configuration works well when an event results in a single, directional movement either upwards or downwards.

You can also get away with a move in the opposing direction, provided it doesn’t reach all of your levels opposing the trend. In this setup, the opposing grid levels act as stop losses.

So having all your grid levels triggered would effectively cause you to be stopped out. The grid is hedged, and has a fixed downside limit, but an unlimited upside.

Single-down grid: This configuration trades against the trend. That is, it buys in a falling market, and sells in a rising market. This setup can work well when volatility is high and whipsaw price action is expected. This grid has a limited upside, but an unlimited downside risk.

The two systems are the exact mirror of one another (see Figure 2). 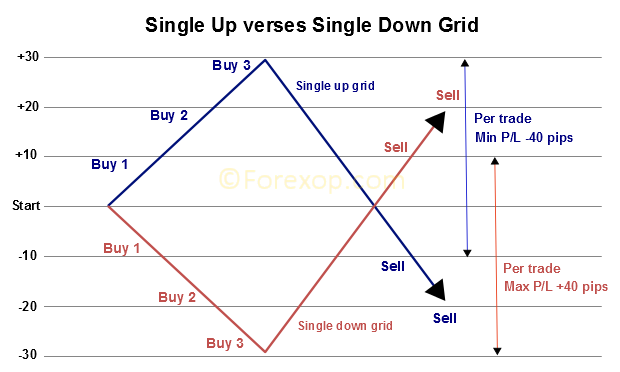 The single down grid is a clear winner in highly volatile situations. This is because it reaches its maximum profit potential when the price crosses the grid at all levels and all trades are executed (see Table 1 above).

Dual grid: One other option is to run the two grids simultaneously to create a dual system. With this setup, it’s necessary to manage the two grids separately. That means managing the overall stops and take profits on both sides.

The idea is when one system is in profit, it’s closed out, with the hope that the market will reverse and push the other side of the grid into profit or at least to give an overall net profit. This can be useful under certain conditions, but it needs more complex trade management.

Wide stop losses can be put in for good measure. Though the best way to handle a grid is to manage the entire system as one unit – rather than worry about the P/L of individual trades. With the single up grid, closing trades separately is risky because it can leave you unhedged.

The most efficient way to work is to have an overall stop loss and take profit target for the grid. At either of those points, all trades are closed and the profit or loss is realized.

This makes the trade management much simpler. It just means watching two numbers. The average entry rates on your buy and sell side.

The average entry rate is updated iteratively each time a level on the grid is reached and a new trade is executed:

From these numbers you can quickly work out the P/L for the entire grid.

Ideal for economic announcements where there’s a lot of uncertainty and events can move very quickly.

This simple trade management means you have the option to run either or both grids by hand. Or have a manual overlay if you’re using and expert advisor.

The single up grid, which is hedged by design, has a fixed downside risk. This is set by the number of grid levels used, and the interval between each of those levels.

The P/L of the single up grid is:

Where L is the number of grid levels on both sides, and S is the gap in pips between each level.

The single down grid, which is the reverse, has:

So in the example above, a single up grid with 3 levels above and below the start point, and a gap of 10 pips, has a maximum potential loss of:

This would be the maximum gain, with the single down grid.

How do you decide when to start the grid? If you’re going to create an expert advisor, you’ll either need to program in the event calendar or create an indicator to decide at which points to start.

Creating an algorithmic indicator for this arrangement is fairly easy. This is because important data releases are typically preceded by the following conditions:

Depending on the significance of the event, these conditions can begin minutes, hours or even days before. These conditions are known as “volatility squeezes”, or “Bollinger squeezes”.

There are standard indicators that can help you pick up this sort of contracting volatility channel.

One thing though is to use a small enough time scale. If you use too large a scale, the less significant events may get lost in market noise.

In actual fact this was a non-event, since everything announced was in line with market expectations. Nevertheless, you still see the pattern of reduced volume prior to the event as traders anticipate the potential surge in volatility. 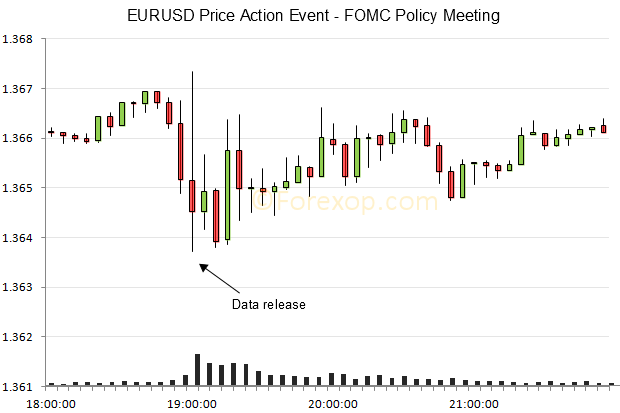 Whether the volatility squeeze is caused by a pending news event or not, the price action following such conditions is nearly always the same.

Simple algorithmic indicators may also pick up non-release periods. For example, the transition from the quieter Asian session to London’s open is often marked by just this sort of pattern – though for entirely different reasons.

Volatility tends to be cyclic at any scale and invariably picks up after low periods. The typical scenario after a squeeze is a break-out from the trading channel. In either case, the grid setup can profit from this move.

To work out a profit distribution, both grids were back-tested 1,000 times each with randomly generated EURUSD rates. This was done with two volatility settings: normal and high.

These both modelled volatility patterns which are typical around economic releases. But, the higher volatility setting tends to cause more “whipsaw” type movements, as well as failed breaks.

The grids were as follows:

The four grid runs each used 1,000 price ticks at 5 minute intervals. So the total sample size was 4 million ticks. A variable spread was also used with an average of 0.8 pips.

Table 2: Returns generated by both grids over 1,000 test runs.

As Table 2 shows, “single up”, is clearly better when the news event results in lower volatility.

When volatility is very high, single down wins though because there’s a higher probability of all grid levels being reached through whipsaw action. This setup then reaches its maximum profit. 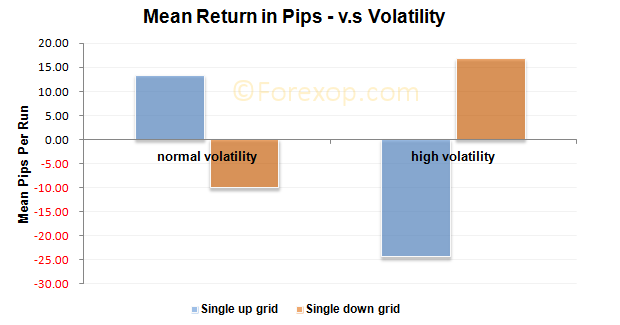 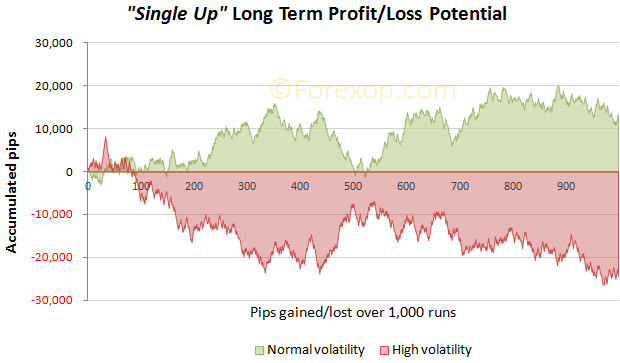 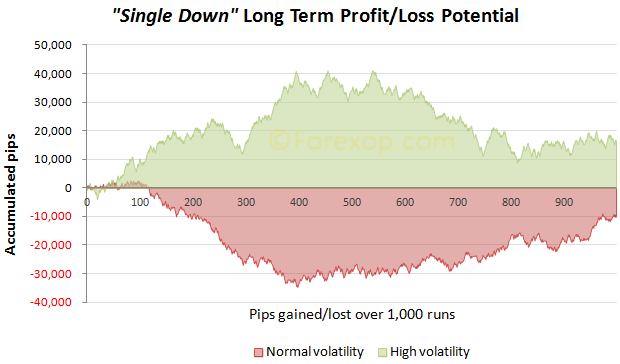 The two graphs above show the accumulated profit/loss in pips for each of the four runs. These represent the long-term likely profit distributions for each grid, following both high/low volatility news releases.

The Excel workbook provided below contains both grid setups. The spreadsheet enables testing against either real or simulated data.