In this post I’ll describe a day trading system for the opening of the London market. Within the 24-hour forex clock, this period is on average the most active and sees the highest order volumes. As I’ll explain it’s where some good opportunities exist for entering into early forming trends. This system can also be used for trading economic and news releases. 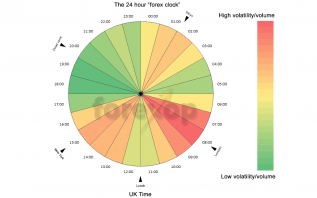 This strategy works by detecting breakouts in EURUSD at times when volume is increasing sharply. I’ve focused specifically on EURUSD for a few reasons that I’ll explain later. However this method is also applicable to most other major currency pairs.

The theory behind this strategy is that the first few bars after London trading gets underway often sets the trend for the first part of the trading session. That means the predominant direction of EURUSD in the near term. In the table below I’ve measured this effect over a four year period.

In the test I used a momentum threshold of 100 points over six bars – spanning 30 minutes after the London open. The results were as follows:

When a bullish momentum pattern is seen at the open, in 65.9% of cases the market went on to rise by at least as much as that momentum threshold over the following 30 minutes.

In 76.1% of cases, after a bearish momentum pattern was seen at the open the market went on to fall by at least 100 points over the following 30 minutes.

It’s well known that a strong directional movement on high volume often dictates the near term trend. In fact doing the above momentum test at random times of day reveals either lower percentages or too few cases to measure because of an absence of trends.

Why EURUSD is the Choice Currency

I am using EURUSD as the example currency here for the following reasons.

Other good candidates are GBPUSD, USDCHF, or USDCAD.  USDJPY and AUDUSD also peak in the London morning session but that peak is significantly lower because a higher proportion is traded in Tokyo and New York. The peak hour for commodities is generally the start of New York’s trading session.

I will be looking for “typical breakout” patterns after the open on the London market. I will focus on the M5 chart here but other timeframes like M15 or M30 are certainly possible. This is down to preference.

To begin with we first need to look at the forex trading day over a 24-hour cycle.

With the exception of futures trading, foreign exchange is an over the counter (OTC) market. It operates continuously 24-hours each day Monday through Friday.

And while there is no set opening and closing times in forex, the big global regions kick in and out at certain times of the day. This leads to predictable peaks and troughs of volume and volatility throughout giving rise to a predictable 24-hour cycle.

This cycle means that the characteristics of the Forex market are very different depending on what time during the day you are trading.

The big institutional foreign exchange dealing desks are clustered in London. In fact the City sees about half of all global volume on a typical day. Hence this is why the open of the London markets has special importance in the 24-hour forex clock.

The graphic below shows the average volatility changes of the major currency pairs at each hour during the day.  This is a “proxy guide” to the relative volumes traded at different times of the day. Red is high volume/volatility and green is low. 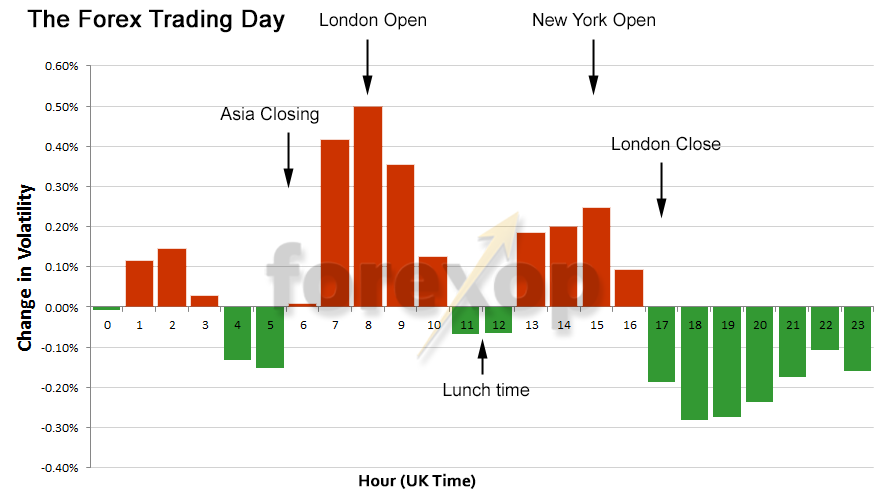 For convenience I’ll simply reference everything to “UK time” on the understanding that this means GMT or GMT+1 depending on the time of year. During the summer, London is GMT+1 and during the winter it’s GMT. This is also called UTC (Coordinated Universal Time).

If you are trading time zones be careful not to get caught out by daylight saving. The US changes over two weeks before Europe in the summer and one week after in the winter.

As Figure 1 above shows, most volume is traded between 7:00am and 10:00am UK Time. The afternoon session is typically much quieter and sees roughly half the volume of the morning session.

The main periods to be aware of during the forex trading day are as follows:

The events are shown in the 24-hour forex clock (see below). 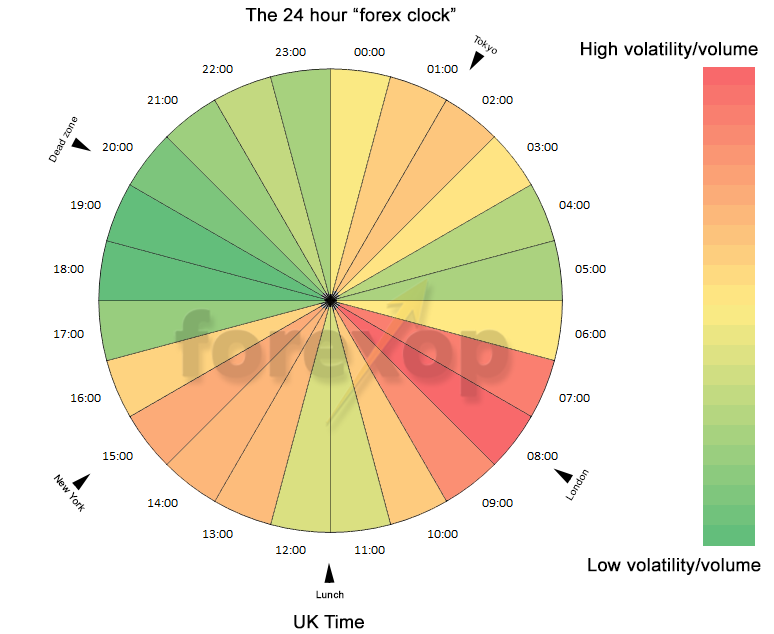 Notice that after the busy morning session, volume drops off sharply between 11:00 and 13:00 as traders go for lunch. The next peak happens at 15.00GMT when New York opens. Volume then drops off dramatically at 17:00 as London closes for the day.

This is the beginning of the “dead zone”. Unless there is an FOMC meeting or other announcement in the US, this period between 17:00 and 23:00 sees very little activity. Volume picks up again as Tokyo opens and Asian markets reach peak activity in the early hours.

Trading Breakouts at the London Open

If you look at a EURUSD chart over a few days you may notice that when the London market opens it doesn’t always follow the same trending pattern as the overnight Asian session. In fact it often initiates a change in direction. And where there isn’t a change in direction, the momentum behind the trend may accelerate sharply. This strategy aims to detect these breakouts as they are happening.

The first step in the strategy is to define a momentum threshold m, and the number N, which is the number of bars either side of the event to be scanned. I’ll refer to the candle which occurs at the time of the London open as the “event bar”.

I then draw a pair of horizontal pivot lines. These are as follows.

The next step is to measure momentum at the trigger bar or Nth bar after the event. The momentum at the Nth bar is the difference between the mid prices at the event bar and the Nth bar. I will usually wait for the Nth bar to complete so both open and close levels are known. This means an order is not actually placed until the N+1th bar. 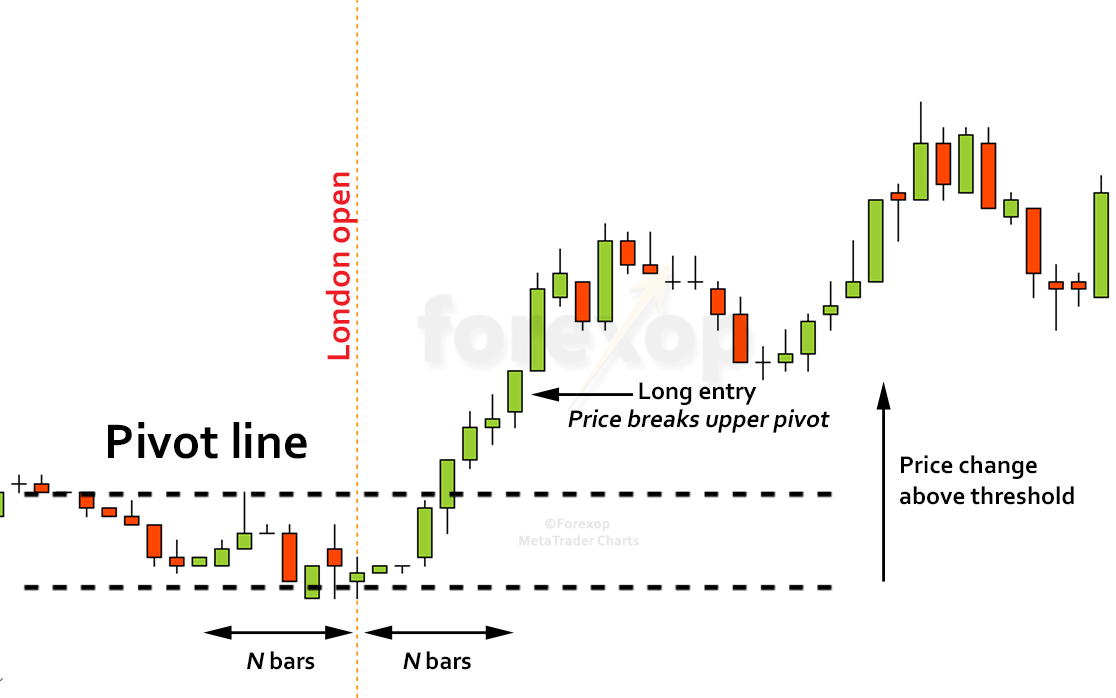 It isn’t necessary to use the same distance behind the event bar and after event bar. You might want to scan further back to create the pivot lines. Or even scan further forwards to measure the momentum. This really depends on the setup and the chart timeframe you are trading on.

The stop loss should be equal to or smaller than the take profit value. With breakouts there’s no point in chasing the market if it goes against you. If you make the wrong call simply cut your losses and wait for the next trade.

The table below shows a real example. Here the open, high, low and close (OHLC) values are shown for EURUSD before, on and after the event. The event bar is at 8:00 coinciding with the open of the London markets.

For simplicity in this example I use N=3 bars. This means I examine 3 bars before and after the open event. The trigger bar is the bar to be examined and this will be the bar that opens at 8.15. That is, after 3 complete bars from the event bar. I will use a momentum threshold of 200 points. So the mid-price of the trigger bar must be at least 200 points either above or below the mid-price of the event bar.

Looking at the trigger at 8.15 you can see that both conditions for a long entry (buy) are met. The upper pivot line has been crossed. Secondly, the Dx column shows that the mid-price of the current bar does indeed rise above the 200 point threshold for the momentum conditions to be met.

Since the bar needs to be fully complete before the mid-price is known, this means the earliest point the order can be placed is the next bar. That’s at 08:20am.

With both of the conditions satisfied, in this example a buy order will placed between 08.20 and 08:25.

Figure 4 below shows the chart section. 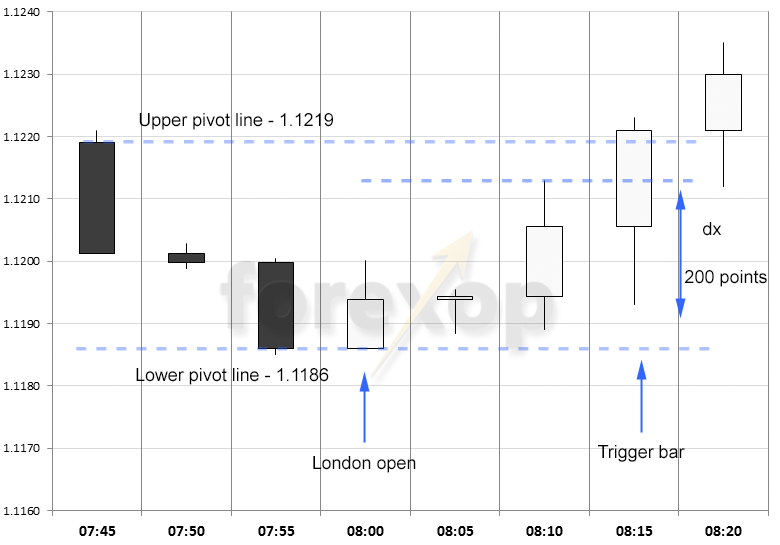 The following charts show some more examples. For these I used 9 bars behind the event to create the pivot lines, and 6 bars ahead to measure the momentum. On the M5 chart this corresponds to 45 minutes before and 30 minutes after respectively. The momentum threshold was 25 pips (250 points).

The chart in Figure 5 shows the first example. The vertical line and green arrow marks the opening of the London markets at 8.00 UK time (10.00 broker time).

At this instant the momentum turns and the market begins a brief rally. The price rises above the pivot lines and momentum is above the threshold (250 points) so a buy order is placed. The take profit is reached shortly afterwards. 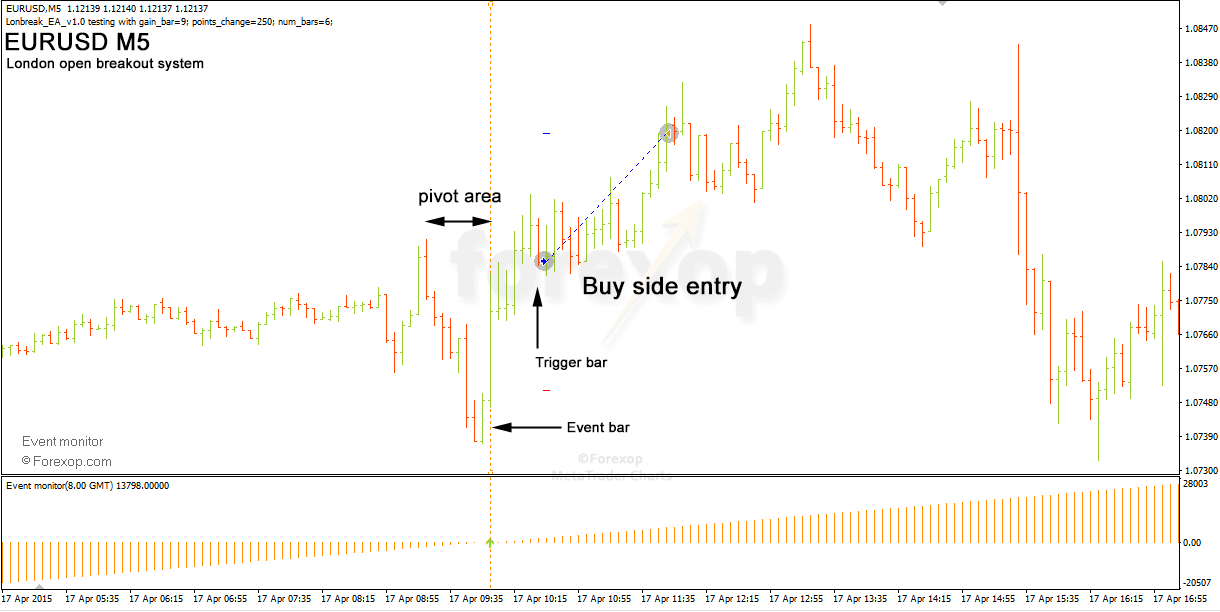 In this second example the trend doesn’t turn but rather it accelerates as the market gets underway. Both conditions are met so a buy order is placed at the trigger bar.

The example in Figure 7 shows a flat market during the hours before the open. This begins to trend strongly after the open at 8.00am as volume picks up sharply. Sentiment is bearish and the trend accelerates further and reaches a deep low later in the day.

The final example shows another case where the market reverses direction as London opens. In this case a gentle upwards trend flips to a bearish rally.

As I’ve shown in the examples it is quite common to see decisive changes in direction at critical times during the day.

With this strategy, the tighter you make the entry conditions the fewer trades there will be. Obviously when you can only enter the market at a single bar on each day this is not a strategy that is going to produce huge numbers of trades. Nevertheless it can produce trades with decent risk adjusted returns.

I’ve demonstrated this strategy on EURUSD because this pair follows typical volume patterns of the main currencies.  Even so there’s no reason why you can’t apply it to other currencies as well. While the Yen, the Australian dollar and New Zealand do tend to have higher volumes and volatility during the Asian session, peak trading is still at UK time and especially during the morning session.

For more details on the indicator see this page.