Most FX traders use what we call the forex spot market. Spot is simply trader’s speak for buying or selling something for immediate delivery. The price in the FX spot market is the price agreed when both sides will settle and exchange two currencies at an agreed rate on the value date – this is usually 2 working days ahead. Of course, for most users of the FX market, this delivery aspect never actually happens.

Brokers know that few FX traders are really interested in buying $100,000 worth of Japanese Yen, or are able to hand over $400,000 worth of Euros. This is why spot forex trades are generally held open on a rolling basis. The open position then has a profit or loss as well as accruing interest.

Even though most players are only concerned with the profit/loss aspect of the deal and the interest, this does not however mean that the users of the FX market are all speculators. Traders use spot transactions for a variety of hedging purposes and business needs.

The spot market is just one part of the entire global forex market, albeit the biggest and most well known. In the shadows, also lurks a huge market in currency derivatives: Namely currency forwards, futures and options.

Currency forwards and futures are where traders agree the rate for exchanging two currencies at a given date in the future. This can for example be 1 month, 3 months, or 6 months ahead.

For example, right now the December EURUSD future on the Chicago Mercantile Exchange (CME) is trading at 1.2523. Whereas the spot rate is 1.2511. The relationship between the spot price and the futures/forward price will be fully explained in due course.

However simply speaking, the FX derivatives market is a function of the spot market and interest rates. Far from being a passive follower though, what happens in truth is that supply and demand for derivatives will also feed back into spot prices. The two markets continually pull and push on one another. This is why it’s essential for traders to understand these markets.

The currency forwards market is what’s called over the counter. Forwards are essentially bespoke contracts between a financial provider, usually a bank, and a client. Currency futures on the other hand are standardized FX forward contracts; standardized by the size of the contract, the delivery date, and the complete settlement process. 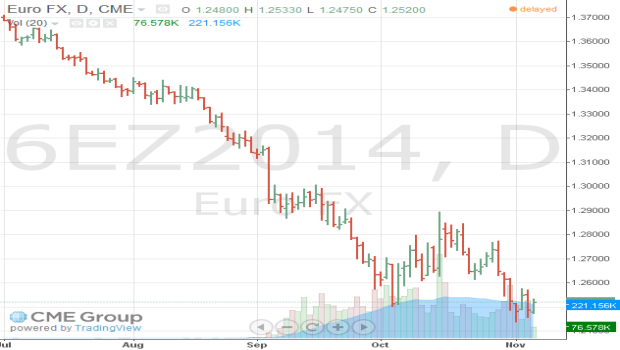 Futures trade publicly on exchanges such as Eurex, ICE and CME without dealer intervention. The exchange provides the matching-settlement service and is the final guarantor. Counterparty credit risk and dealer manipulation is therefore avoided on exchanges. This is why some FX traders and hedge funds prefer to deal on the FX futures market. The downside however is that liquidity is significantly lower than the spot market.

Many traders also make use of the reports which exchanges publish. These reports are one of the few public sources of aggregate data on sentiment and positioning in the currency markets – so they are widely read.

Open interest reports show the number of outstanding futures contracts that have not expired. For example, if the open interest for June 2015 is 1,000 that means there are 1,000 open contracts for that expiry month.

How is open interest calculated?

Unlike volume, open interest only changes when the total number of contracts increases or decreases. The table below shows how open interest changes as counterparties, A, B and C open and close their trades on a futures exchange.

In the first line, A buys one contract and B sells one contract. In the derivatives markets, traders say that A “buys to open“, while B “sells to open“. This means open interest goes up by 1, indicating that A and B, together have made up one new contract.

On the next line, B closes his contract by “reversing out” his position. In market speak, this is called “buying to close”. But he closes the contract with a new entrant C. So the total number of open contracts doesn’t change. B has simply “unloaded” his contract onto C. The open interest stays the same but the volume still goes up by 1.

In the final trade, C closes and A closes and this brings the open interest down 1 to 0 because there are no more contracts that remain open. The volume simply records each as a single transaction. We would see this in aggregate as 3 transactions having taken place over that period.

Since every contract is made of a buyer and a seller, open interest does not tell you which way people are trading. Some will be hedging, some will be speculating. A hedger will trade for cover, but a speculator would trade in the hope of profit. There is no way to tell one from another. Most traders use open interest reports as a way of gauging momentum. They do this by looking at the rate of change.

Trend continuation To give an example, say that there are equal numbers of hedgers and speculators. Suppose that the GBP/USD spot rate is rising. Speculators see it as an upward trend to trade into and buy to open. Hedgers who have a need to sell British Pounds will want to cover themselves in case the pound falls. They can lock in a rate by selling to open. This will increase the open interest. This way, increasing open interest can mean sentiment is supporting the current trend. In this example, it is bullish for GBP/USD.

Trend weakening Now suppose that GBP/USD is still rising. There are already many hedgers and speculators who have open contracts. This is seen as large open interest. Some of these hedgers will now buy to close their positions. They will use the spot market to sell British Pounds and achieve their locked in exchange rate, that adds to downward pressure. Speculators sell to close their positions to lock in their profits, as they see the uptrend weakening. As hedgers and speculators liquidate positions, the open interest will start to fall. This is bearish for GBP/USD as it suggests the current trend is exhausting.

The table below shows an example of open interest data published by the CME. The data is released daily (covering the previous day). I have put each line together to show the change over each day. When using open interest, it’s always a good idea to keep a history for your currency pairs. This will allow you to do your own analysis over various time frames.

FX Options and their Impact

FX options also trade on exchanges but unlike futures, an option has a strike price at which it either pays out or becomes worthless. For that reason, options have the potential to create massive volatility around key expiration dates and levels. An at the money option is at a critical threshold – a move either side can lead to significant profit/loss for the buyer and the writer of the option. This means with such an option, a few pips either side of the strike level can mean the difference between the writer of the option having to pay out and the option expiring worthless and no payout being due.

Options writers can be big players in the markets, so they have the motive and means to try to move the spot price around when it is close to a strike level at expiry. For this reason, it is wise to keep an eye on activity in the options market, and on large open interests. With options, the exchange will also show the split between puts to calls. This can help to give you a better idea about sentiment.

The CME publishes several open interest report reports for FX options and futures. These are useful resources. They also publish a weekly large holdings report. Called the commitment of traders report (COT), it shows open interest for each currency across each exchange. However, the COT report only shows positions which are above the minimum reporting threshold.

Open interest reports contain a lot of information on various markets. If you only trade a few currencies, much of it will not be relevant to you. The best way to use the reports is to extract and archive the data you need and to look at how it changes over time. Keep a history in a spreadsheet, and that will allow you to analyze it properly.