Home Trading Learning
A squeeze is where the market is moved to an extreme value in a short space of time. These moves are often temporary, and so they can create some good trading opportunities for making a quick profit.

What is a market Squeeze?

A squeeze can happen in any traded financial instrument at almost any time. But it is most common in markets where speculators are trading in significant volume. It occurs when large numbers of traders are forced out of the market due to the price moving against them.

The triggering event for a squeeze can be unexpected news or even just a technical event such as the breaking of a support or resistance line.

The name of this event aptly comes from the fact that many traders are all trying to squeeze out of the same exit at the same time.

Squeezes are more common in less liquid, asset markets like stocks, but they can also happen in forex. In currencies, violent squeezes can be triggered by changes in interest rates. Currency pairs with large yield disparities are particularly vulnerable to squeezes. These events are known as carry trade liquidation, or carry pair unwinding.

Once a squeeze is triggered, the rapid unwinding of positions can lead to adverse and sudden price movements. This in itself has the effect of moving the price to more extreme levels. That leads to triggering of stop loss orders and squeezing out even more traders who’re unable to hold losing positions indefinitely.

One of the main causes of the squeeze was long seen to be margin trading. This because those trading with high leverage will have less capacity to withstand drawdown before a margin call is activated. However others believe that margin trading plays no role or even increases the stability of the market.

Automated trading may also cause squeezes to be more potent. When large price movements occur, momentum plays start to look more attractive and this can bring in automated order flow.

The short squeeze, and the long squeeze

Is there a difference between a short and long squeeze?

In stock trading there is a subtle difference between the long squeeze and the short squeeze. Unlike a futures contract or CFD, to short a real asset like a stock, you first have to physically borrow it from someone else and return it at an agreed date.

Once borrowed the stock is then sold. This process is known as selling short. With short selling there can be an higher holding cost for those with short positions versus those holding long positions, as there can be in currencies with yield differentials.

The upshot is that long side traders can afford to sit and wait indefinitely through a price fall, while short side traders can’t do the same on a price rise. In real assets, there’s also the constraint of real supply and demand.

That means short selling in assets like stocks tends to be predominantly short-term and speculative. In these markets, short squeezes are then more prone to happen than long squeezes.

How to take advantage of a Market Squeeze

As traders, we are interested in squeezes for one reason. Because they can act to temporarily move the market out of kilter or away from its fair value. And we can trade this as an anomaly.

Signs of a squeeze

In significantly squeezed markets, these can happen all at once or very close together.

In forex, the minor pairs and yield currencies are the best place to look. 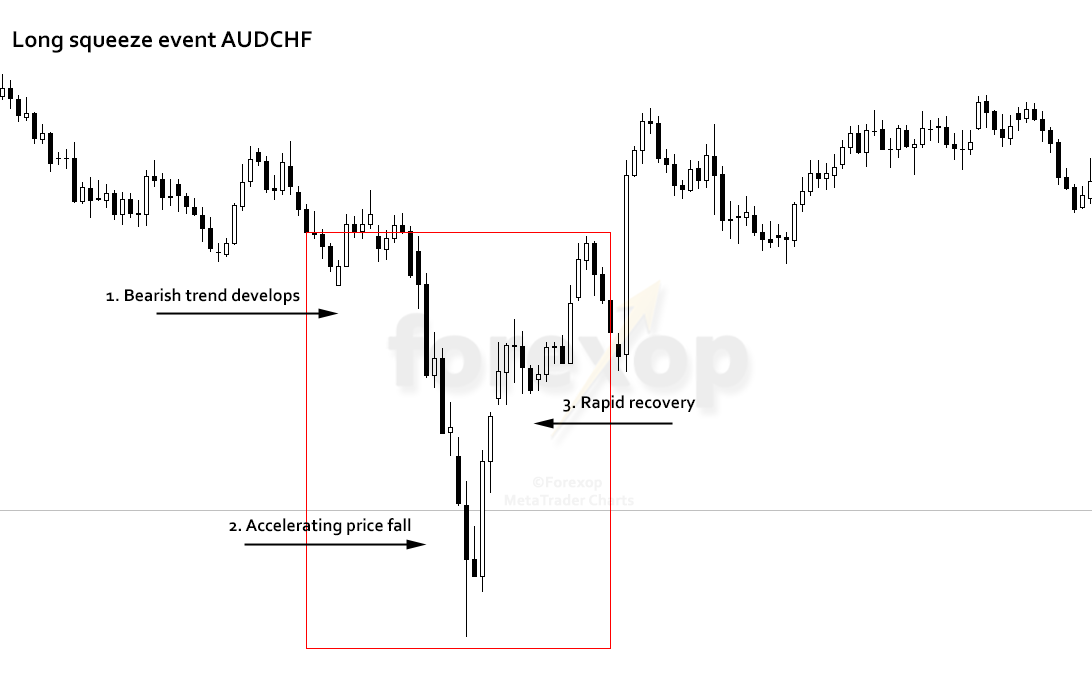 Chart-1 shows what appears to be a characteristic long squeeze event. Here AUDCHF is in a long bearish trend. At time 1, the bearish trend starts to intensify. At time 2, the price falls accelerate sharply, reaching a tipping point. This is probably where automated stop loss orders start to kick in and trigger selling in volume.

At time 3, the market starts a rapid recovery as new buyers come in taking advantage of the lower price. When trading a squeeze event, we aim to enter as near as possible to the recovery point when the market is furthest away from fair value.

Disclaimer: This is not investment advice. Forex, options, futures and CFDs are complex instruments and come with a high risk of losing money rapidly due to leverage. You should consider whether you understand how CFDs work and whether you can afford to take the high risk of losing your money.
© 2020 Forexop.com
We use cookies to offer you a better browsing experience, analyze site traffic and to personalize content. Read about how we use cookies and how you can control them by clicking "Privacy Policy". If you continue to use this site, you consent to our use of cookies. Find out more.