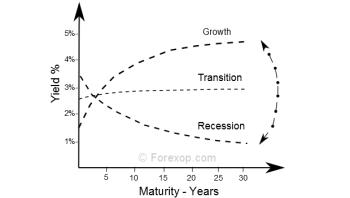 Yield curves: What traders should read from them © forexop

Most currency traders learn early on that interest rates are one of the main driving forces behind moves in the financial markets.

When interest rates change, currencies, debt instruments and stocks will readjust to reflect this. This price adjustment often happens before any official announcement as traders anticipate the rate change and start to revalue assets accordingly.

In this article, I want to explain how an understanding of the yield curve and interest rate cycles can be used in forecasting trends in the currency markets. I also explain, in quantitative terms, by how much a currency’s exchange rate is likely to move when a rate change is expected.

While central banks usually set the official short term or overnight rates, it is the money markets, in which investors, banks and business lend and borrow, that decides the effective interest rates over different time periods.

The yield curve is just a chart which shows these market rates for different maturities or terms.  When trading a currency pair, the yield curves for the two currencies can reveal a wealth of valuable information.  They tell you the expectations for the economies and the likely interest cycles. Yield curves for most currencies, as well as rates used to generate them can be found readily online.

Rate differentials When you examine the two yield curves, there will usually be interest rate differences or spreads, at certain points in the chart. When a currency has a wide enough yield differential at any maturity, carry traders will invest in its debt or debt derivatives at that maturity. In this way, markets attract foreign capital flows due to relative yield advantage.

A general rule is that in the capital markets, funds will move to the place offering the highest risk-adjusted return.  This is why higher interest rates cause a currency to appreciate. 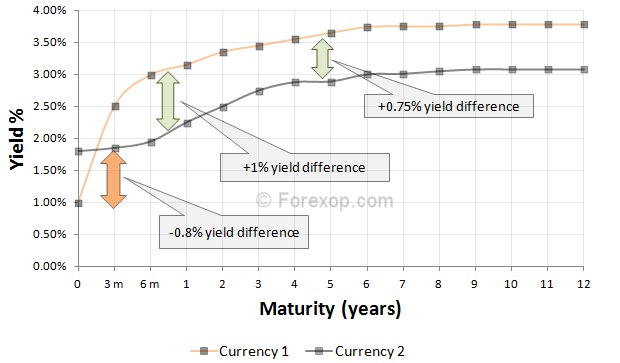 How Much Will a Rate Change Move a Currency?

How much does an exchange rate move up or down when the interest rate changes? The exact amount is a function of the rate difference and the time the market expects it to last. Consider a toy example that strips out all other influences. Let us suppose the real interest rate for both EUR and USD is 3% and the spot price for EUR/USD is 1.4. In terms of interest, there is no relative advantage to holding one or the other. Now let us say the interest rate for EUR rises to 4%.

The market expects the USD interest rate to rise to 4% after one year giving rate parity again. If I sold USD and bought EUR, I would be gaining a 1% yield advantage over one year. That amounts to 140 pips or 0.38 pips per day.

Let us suppose the exchange rate does not change. A trader can do the following:

Thus the above has produced an arbitrage opportunity which produces a risk free 1% yield.

Because markets are forward looking, we would expect this to discount into the exchange rate immediately, so that the spot rate would rise by 140 pips, and would decline by 0.38 pips per day over the year. In other words, traders will do the above sums, and buy Euros and sell Dollars until the profit opportunity is no longer there. A trader doing the same trade on day 2, after the rate went up 140 pips would make exactly zero profit. Figure 2 shows this. 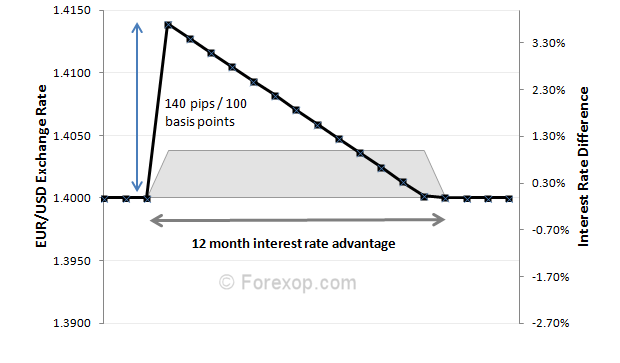 This highlights an important point that not only is the interest rate important, just as important is the time period the market expects the rate advantage/disadvantage to last. Knowing how the rate cycle will evolve is critical to understanding moves in Forex, and to do this we use the yield curves. In the above example, if the market expected rate parity again after 6 months, the rise would only have been 70 pips.

The conundrum, as shown above, is that once the rate rise is priced in, the exchange rate should actually fall over time as the interest rates converge again. This is what’s called uncovered interest rate parity and is due to the market’s tendency to eliminate any opportunity for arbitrage.

Yet this isn’t what we see in fact. When currencies have an interest rate advantage, this causes a flow of funds, which can in itself inflate the exchange rate above fair value. Economists call this the forward puzzle or the uncovered interest rate puzzle.

This is why carry trade destinations like the Australian Dollar overshoot and become overvalued. Reverse carry traders try to exploit these types of events by shorting the high-yielding currency.

Traders compare the yield curves for their currencies to anticipate longer-term trends. The shape of the two curves will tell you a lot about the economies and interest rate expectations, and from that, you can deduce what will happen to the exchange rates.

For example, if the spread between the two curves widens for longer maturities, that means traders expect interest rates to diverge further as time goes on. See the left chart in Figure 3. This is bullish for the currency with the increasing rate advantage. On the other hand, if the widest spread is at the short end of the curve and it narrows, this is negative because it means traders are anticipating interest rate convergence further out.

That is bearish for the currency with the narrowing yield advantage. The right chart in Figure 3 shows this. This was the situation in the example above, and the yield curves would have reflected this.

Yield Curves and the Economic Cycle

Traders describe yield curves as normal, flat or inverted. With a normal yield curve, the rates for longer maturities are higher than for shorter maturities. It is important to realize that the higher rates are not a prediction of where short term interest rates are likely to go.

Growth phase In a normal economy, there is a premium for holding longer dated debt obligations due to risks such as rising rates and inflation.

Contraction phase What happens with a recessionary economy is that base interest rates will usually drop. Facing likely interest rate cuts, a 5-year bond paying say 3.5% starts to look attractive to bond investors. Those expecting rate falls will want to lock-in a higher yield, so they buy these longer dated bonds.

This pushes the bond prices up and the yields down. This results in an inverted yield curve, which usually signifies an economy entering recession. The flat curve usually marks transition from recession to recovery and vice versa. 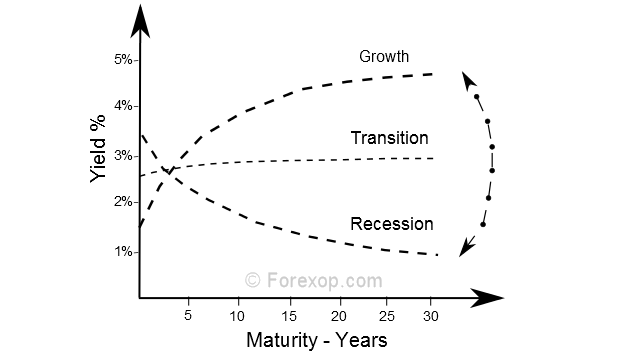 However, there is a widening gap between the rates and the level of the pound since 1997/1998. One reason for this is the lower global interest rate environment we have had since that time. There are a finite number of investment opportunities available. Assets always compete for funds. 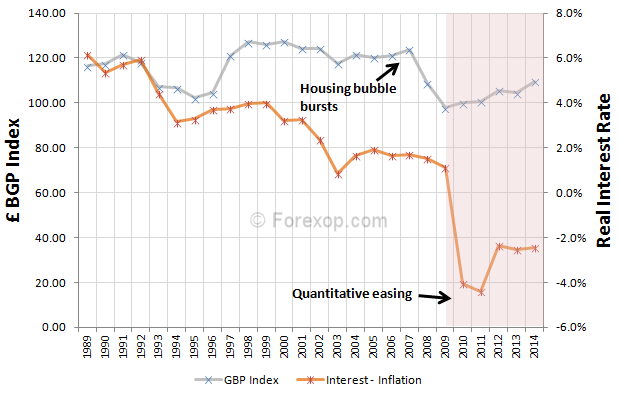 Looking at Figure 6 this chart compares the U.S. Dollar and the Australian Dollar using their trade-weighted indices. The bars show the difference in real interest rates. What this chart shows is the inverse relationship of two different currencies. The USD is more defensive. The AUD is a higher yielding currency geared to commodities and higher interest rates.

Rate direction is what matters Notice how the strength of the Australian Dollar closely tracks the direction of interest rate changes, rather than the absolute value.  During the 1990s, the dot com boom was supportive of the U.S Dollar, despite the Australian Dollar having a big yield advantage. One of the reasons was funds flowing into the U.S. equity markets.

As the dot com boom ends, and the rate differential increases, the upward rate cycle supports the Australian currency again. The Australian economy benefited from the commodity boom during the 2000s and this, along with an inflated housing market are reasons for the higher interest rates. 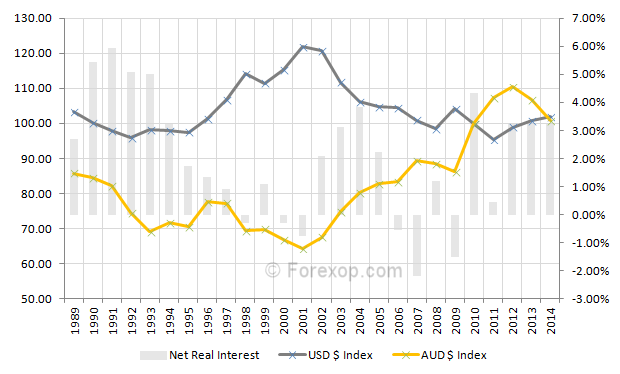