Home Technical Analysis
The ascending broadening wedge is a chart pattern that can be traded in several ways; either as a bullish/bearish breakout or with a swing trading strategy.

The pattern itself is easy to spot as it resembles a megaphone. Usually the price is hitting higher highs on the top resistance line and higher lows on the bottom support line.

Unlike narrowing wedges, and triangles, the broadening wedge means volatility is rising.

What the Pattern Means

Ascending broadening wedges are usually followed by a bearish or downward break once they complete. Although, based on historical forex charts, the odds of an upward breakout are only just a bit lower than a downward one.

In forex, there’s a fairly even split between the pattern appearing in uptrends and in downtrends. Though in stock markets there could be greater tendency for them in bull markets (see Bulkowski).

Ascending broadening wedges can extend for long periods of time. There’s no easy way to predict when or how the pattern will end.

With triangles and narrowing wedges, you can roughly estimate the end point by extending the lines forwards. But since broadening wedges extend outwards with rising volatility, this isn’t possible.

This along with the fact that an upward/downward breakout has nearly even odds means that trading these patterns requires some special considerations.

The most basic strategy is to wait for a breakout confirmation such as a breakthrough of the lower support line. That means sell once the lower support area is breached. But this is the least effective of all the strategies. Probably because it’s the one everyone is using.

Choosing the right stop loss placement is a critical decision but it's often left to chance. This Metatrader tool advises where to place stops and take profits on any order. Just set the desired trade time and win ratio and the indicator does the rest.

Historical data shows the chance of this leading to a profitable strategy will be no better than flipping a coin.

Selling at a downward break of the mid line of the pattern greatly improves the odds of success. If the price breaks the mid line of an ascending broadening wedge, there’s a 53% chance that a further downward move will happen.  See the final section.

The second strategy is to trade it as a bullish continuation. With this approach you go long (buy) as the price breaks above the upper resistance line of the wedge. This has the best odds of success.

From historical currency data, there is about a 55% probability of a further bullish advancement after a break of the upper resistance line. The bullish move lasts at least for the same duration as the pattern itself.

Because the ascending broadening wedge does tend to extend indefinitely, it can also be traded as a price channel. In this case, you can use a swing strategy to trade off the highs and lows between the support and resistance area. With this you place a sell order when the price rebounds down from the upper resistance line and place a buy order when the price rebounds up from the lower support line.

Note from the above though that you need to pay special attention to breaks of the support/resistance areas. 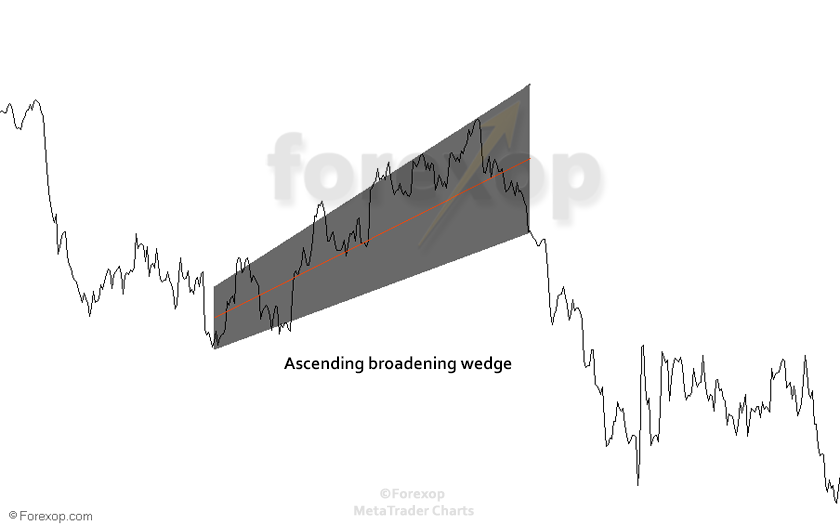 If the wedge’s lower support line breaks, the probability that the price will reverse and continue back up is higher than it falling lower. The odds are close at about 51:49.

However a break of the upper resistance line suggests the probability of a further upward advancement is high, at about 55%.

Therefore with a swing strategy the best approach is to try to trade the movement between these lines. And it makes sense to give more weight to the buy side than the sell side, especially if the upper resistance line has broken.

How Reliable Is The Pattern?

To test the reliability of this pattern we looked at the five major forex pairs EURUSD, USDJPY, GBPUSD, USDCHF and USDCAD.

We looked for all ascending broadening patterns over the past 10 years on the chart timeframes from fifteen minutes to daily (M15 to D1).

The back test looked at pattern sizes up to 100-candles in duration. Any widening wedge where the orientation was upwards was counted. 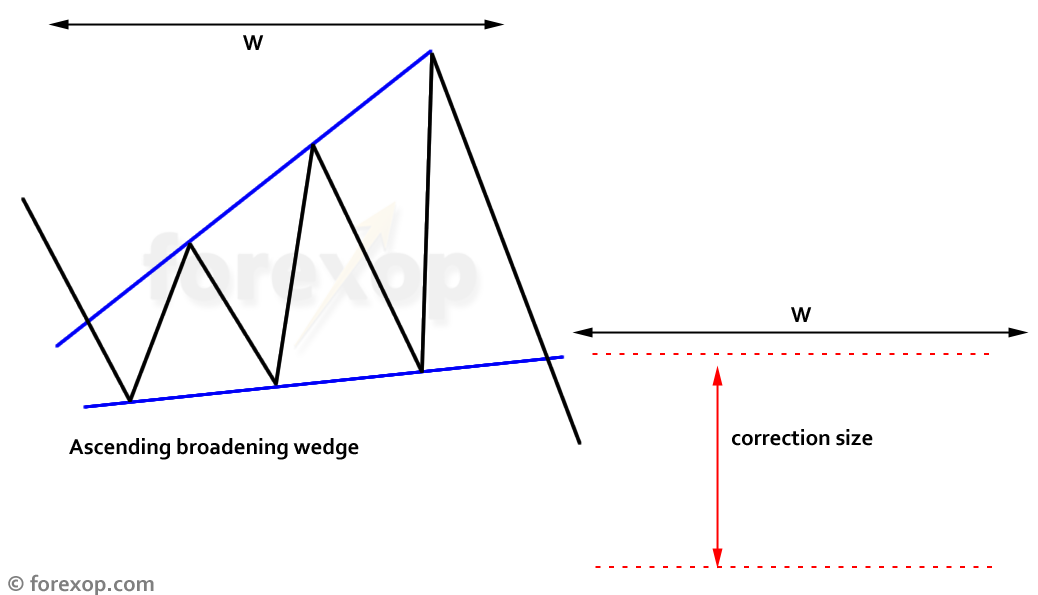 The entry price is taken as the mid-price on the bar where the wedge is first identified. This is the earliest possible time for placing a trade order. See Figure 3.

The table above show the result. So based on historical forex data, the ascending broadening wedge typically ends in a bearish or downwards correction in price. But only just.

In 47.8% of the patterns, the upside move was greater.

Every pattern was counted in the above test. If we just count wedges that appeared in a downtrend and exclude all others, the results are a bit different.

The odds of a downward breakout, and continuation of the trend, are now a bit higher at 54.8%.

Using Support and Resistance Lines of the Wedge

Just to confirm or disconfirm the breakout scenario, we looked at setups where the price makes a clear break below the lower support line. We measure the correction occurring after the bar where the price first breaks beneath this line. This is a likely entry point for placing a sell order with any breakout strategy.

If the price didn’t break below the lower support after W bars, the pattern was ignored.

The table below show the results for all of the data.

Using the midline of the wedge instead is a better indicator for future price direction. See table below.

If the price breaks down below the midline of the wedge, there’s a 53% chance that it will descend further and probably move to the lower support line. So based on historical forex market data, a selling breakout strategy should use a break of the mid line and not a break of the lower line as an entry signal.