Home Technical Analysis
Not all channels are easy to trade. In practice most aren’t. So an essential part of a price channel trading system is deciding which to trade and which to ignore.

In using the tools in technical analysis there is never a sure way to tell how a price channel will develop over time, or when the breakout will happen.

Nevertheless there are some clues that we can use to understand what is going on and so have a better chance of making a profit.

There are certain flags that we can use to predict when a breakout may be building and the direction that breakout is likely to take. These can be used together with other insights such as fundamentals.

Which Price Channels are “Reliable”?

When using channels as part of a technical trading strategy, it’s good to know how to spot the first signs of a price channel breakout. This holds true if you are trading the range or the breakout itself.

The easiest starting point is to draw all of the nearby support and resistance levels. With Metatrader this can be done easily with a price channel indicator. While you can draw them in by hand, the advantage of using an indicator is that it’s less open to interpretation.

A lot of traders wait for nearly perfect patterns to form before getting involved. But text book patterns that look “obvious” are few and far between. They’re also not the easiest to trade.

Remember for every transaction in forex there has to be a counterparty taking the other side. Where the crowd is trading on one side and expecting a certain outcome, sophisticated traders are usually taking opposite positions.

How to Read a Price Channel Breakout

The chart below shows a short bearish channel forming on an hourly chart (USDCHF H1).

The first thing to notice about this price channel is that it’s a section within a much bigger trend. The zoom view (small box on left) shows that on a bigger scale this section looks like a small continuation pattern of the bullish trend.

Even though this channel is downward sloping and bearish, on a grander scale the chart section looks like a bullish flag or a wedge pattern.

This gives us a clue that the bullish trend could resume at any time. The channel, on a bigger scale, is a consolidation area. So a breakout is probably going to be to the upside and not the downside.

On this chart there are three main support/resistance lines. These are shown in yellow. A forth support line is also forming underneath the channel.

Analysing the price action at a channel break

The breakout starts to form around the two shaded circles. We can make some assumptions about what’s going on by examining the price action in more detail. 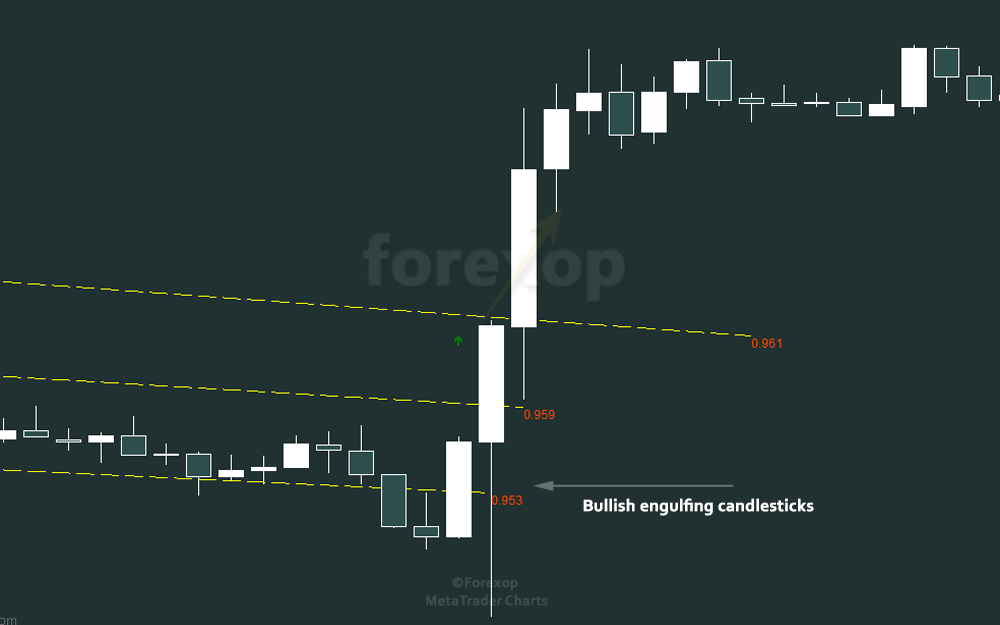 The third candle falls back briefly but makes a higher low than the last. The market rallies back up. It then closes well above the channel’s upper resistance line.

The ideal timing for the buy orders to trigger would be around the second or third candle. More conservatively we could wait for a break-and-hold of the upper resistance line.

With a breakout strategy, you can always increase the position size if the breakout turns out to have strength. Profit can be locked in using a grid strategy or simply using a split order system.

Breakouts are tactical trades so there’s no point in holding on to the position if the market is going the other way. So with a channel breakout the stop losses would be best placed just below the lowest support line of the price channel. If that lower support line fails then an upward breakout isn’t likely any time.