Home Technical Analysis
In forex a descending triangle happens when a currency pair in a downtrend attempts to reverse and makes successively lower highs. While at the same time it is being supported by enough demand from buyers to keep a fixed floor.

When this happens it causes volatility to drop as the price squeezes into a narrowing range. This forms the characteristic triangle’s tip. See the typical pattern in Figure 1. 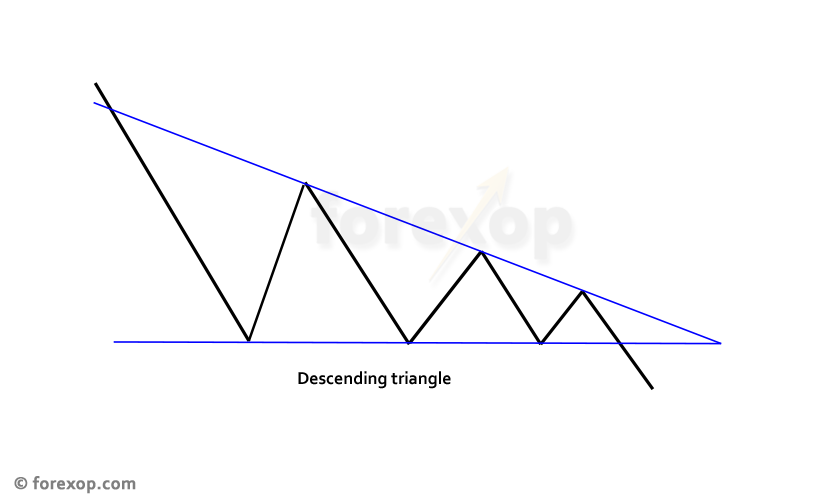 Afterwards the market usually breaks to the downside. This pattern hints towards continuation of a trend rather than reversals.

Yet in forex, these chart patterns can appear and be traded profitably at most time frames.

How to Confirm the Chart Pattern is Bearish

Before trading them, it’s a good idea to do some basic analysis. This helps to filter out the weak and marginal cases.

Look for the following properties:

When trading the sell side, the first thing is to confirm the downward trend. This is because the bearish triangle typically appears as part of a small correction wave during a bigger down trend.

The structure itself should not be the entire trend or a large section of it. Use a moving average and retracement tool to check.

Panning out to a bigger scale allows you to check for support and resistance areas beneath and above. If there are key support lines beneath the pattern this is probably a red flag.

It’s better to trade the early or middle part of the trend. Use caution when a strong bearish trend has drawn down some range because this can suggest a pull back is due. 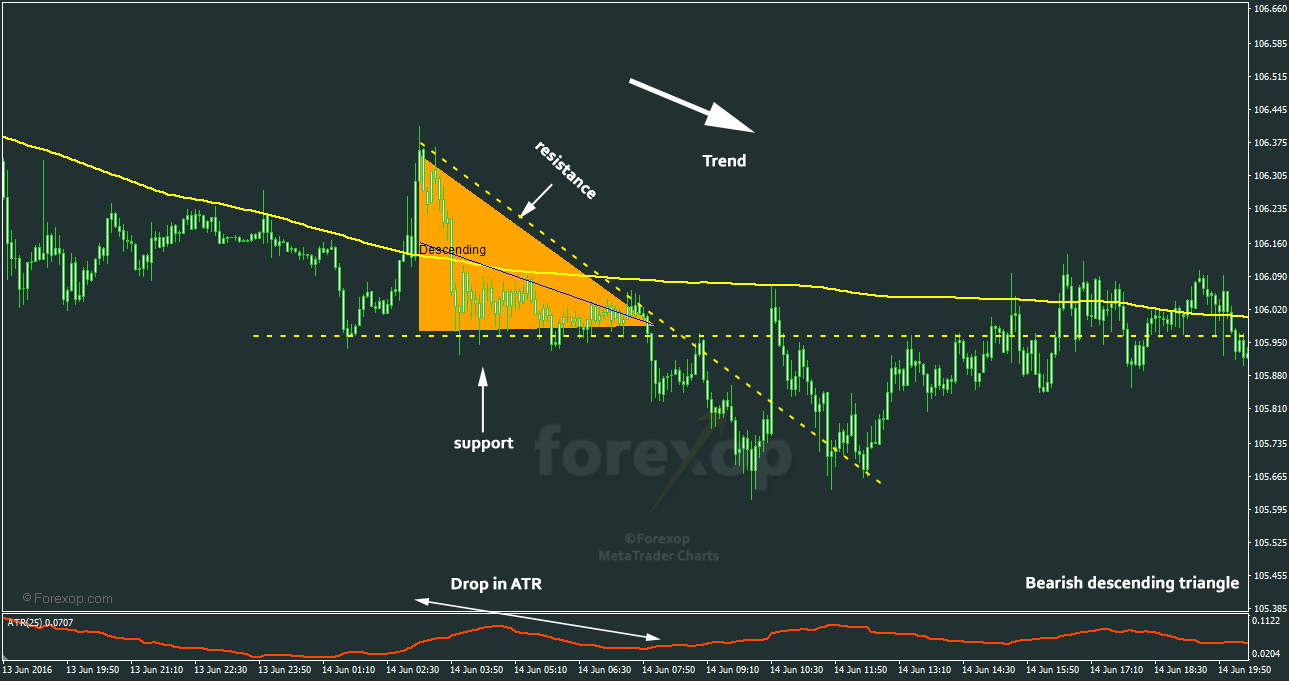 Also the pattern should produce a steady drop in volatility. To check this, we use the average true range (ATR). The ATR period should be smaller than the average length of the pattern. You can see in Figure 2 that the red ATR line is falling from a peak to a trough.

Then look at the ratio line nearest to the top of the pattern. The ratio should be small; usually between 23% and 38% – but below 50% retracement is acceptable.

After the descending triangle completes, there’s no way to know exactly how or if a bearish breakout will develop.

One popular method is to wait for a complete candle to break beneath the lower support line. This creates a definite entry signal. The triangle/wedge indicator we use detects the end of the pattern. So this is the trigger we use when confirmed with the above filters.

To estimate the likely breakout strength and direction we use the following: 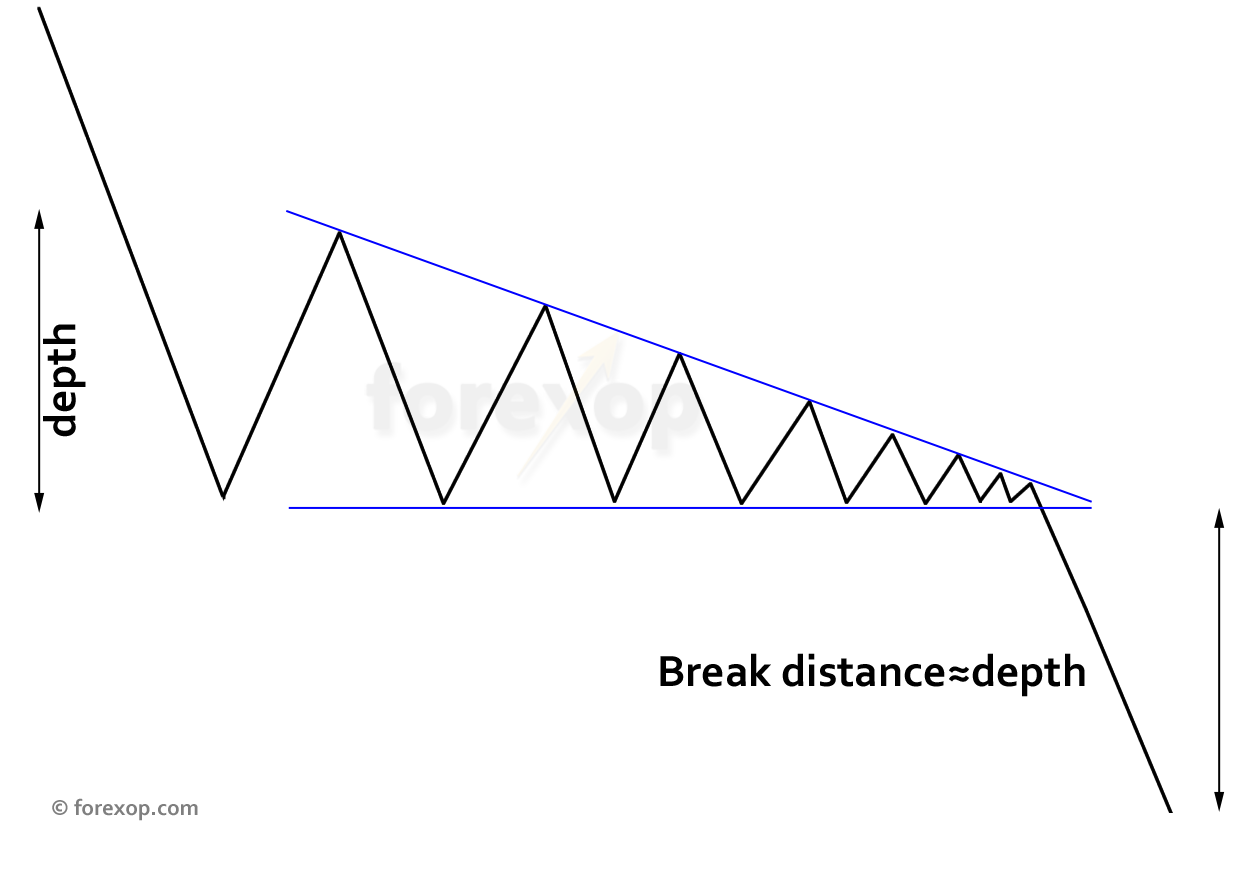 The overall profit target is set around the depth of the pattern. For example suppose the distance from the highest to lowest point is 200 pips. The profit target is then set at or below this amount.

Triangles are technical breakout patterns. Therefore unless there’s some fundamental reason to hold the position, we cut losses if the bearish break doesn’t happen quickly.

With breakouts it’s often better to use a more conservative value for the stop. So this is set at or just below the profit target.

We use no more than ¼ of the triangle’s total length for setting order expiries. For example if the structure takes 8 days to complete, then that means waiting no more than 2 days for the breakout.

When trading bearish breakouts we prefer to use a “split entry” method. This means once the pattern is nearly complete, you pyramid into the position with a series of orders.

These can either be placed together or as sell stop (pending) orders below the support level.

To do this, divide the total position into a set of smaller trades. For example, instead of trading 1 single lot, you split this as four orders of ¼ lots (units/shares) each. See Figure 4.

By doing this, if the market does recoil back up you won’t be completely exposed. This is unless you are unlucky and the market zig zags, firing and stopping each of the orders in turn.

Splitting the order gives much more flexibility by allowing you to see how or if the breakout develops. You can for example take profit on some of the position as the breakout advances. Therefore lowering risk. 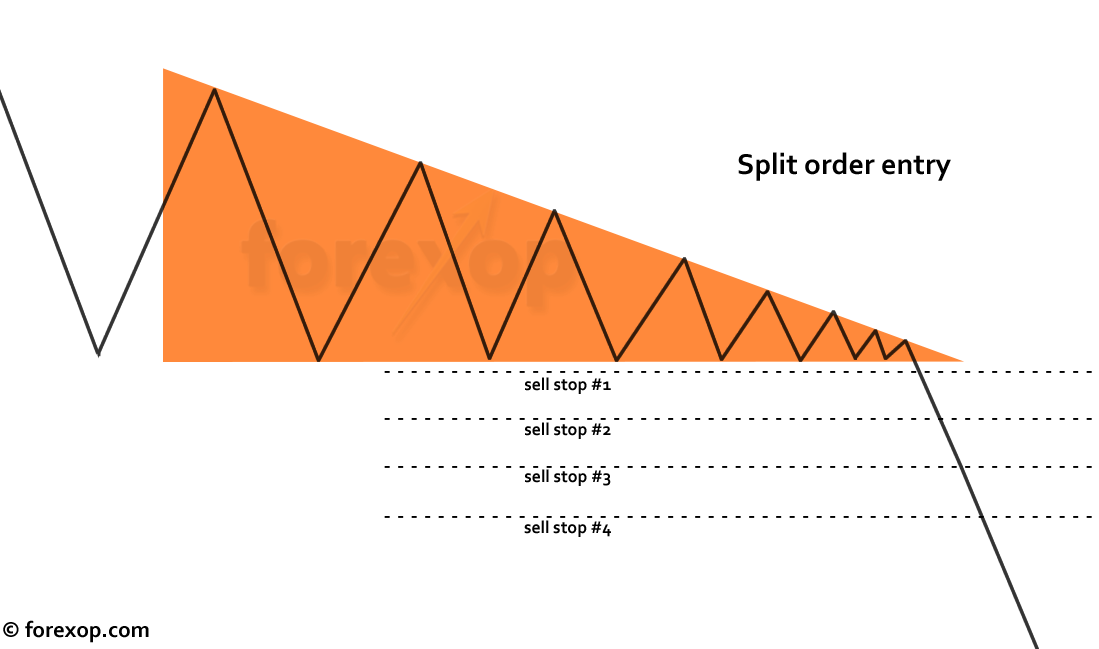 For example, say we detect a bearish triangle forming on USDJPY. The depth (top to bottom) of the triangle is about 170 pips. USDJPY is at 101.724 when the pattern ends.

The total volume will be 1 lot so we split that between four orders. Each is ¼ lots in size. Each order is placed 20 pips apart. A 100 pip stop loss/take profit is entered on each order.

A sell stop order triggers only if the market falls to that level or below. This means the lower orders will only trigger if the break develops and pushes below the entry position at 101. If there’s a strong retracement back up, there’s a good chance that not all of the orders will trigger.

More on the triangle/wedge indicator