Home Technical Analysis
This pattern appears across all forex charts and like the ascending version, the trading rule is not entirely straightforward.  Based on analysis of forex chart data there’s a slightly higher chance of an upward or bullish breakout from the pattern.

Where the wedge shows a stronger bearish tendency there’s a significantly higher probability that the market will continue to trend downwards for some time as the wedge grows. So before trading the pattern it’s a good idea to use some pointers to try to gauge the market sentiment and which way the trend is likely to unfold. That’s what we’ll look at in the rest of this article.

The descending broadening wedge is easily spotted on a chart. It looks like a megaphone with a downwards tilt. It’s equally likely to appear in downtrends as well as uptrends. 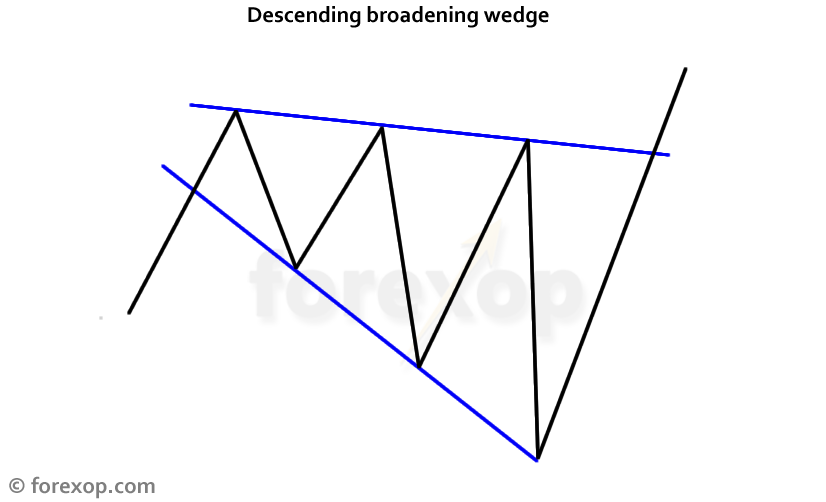 The pattern should have a noticeable resistance area on the top and support area on the bottom. Typical of other chart patterns, the wedge probably won’t be perfectly formed. It is more likely to be irregular. The main clue is the two lines moving apart from one another with clear support/resistance.

To distinguish it from a flat or ascending pattern, we use the midline. This should be angled downwards.

The descending broadening wedge pattern can extend for long periods on rising volatility. Because the two “arms” are moving apart there’s no “crossing point” to the pattern like there is with a pennant, a wedge or triangle. This makes it harder to estimate when the pattern might end.

As with the ABW you need to pay special attention when using the pattern as a “stand alone” buy/sell signal. There’s no simple catch all rule. Each case has to be looked at individually.

It can signal the start of a trend reversal. In that situation the pattern marks a change from an upward trend to a downward trend.

The back tests look at forex pairs, EURUSD, GBPUSD, USDJPY, USDCHF, and USDCAD at all timeframes from M15 to daily (inclusive).

This test examined every pattern, regardless of any other factors. What this shows is that with no other factors considered, there’s a slightly higher chance that the DBW pattern will end in an upwards breakout than a downwards breakout. But it is very small at just 51.4% versus 48.6% the other way.

This makes trading breakouts from this pattern more challenging than narrowing patterns such as triangles, and pennants.

Unlike the ABW the descending pattern doesn’t show a clearer signal when it is in an uptrend or a downtrend. When it’s in a downtrend, there’s only a slightly higher chance that the downtrend will continue for some time. The odds are about 52:48 that the wedge will extend downwards without any upwards break – at least for its current time duration.

However as with the ascending pattern, if we look at continuation in the direction in which it’s moving, this gives better odds.

This test looks at patterns only where there is a break through the lower support line of the wedge.

When this happens there’s a higher chance that the market will extend further downwards. This test measures the corrections taking place over the next W bars, where W is the length of the pattern when it’s first identified (see here). 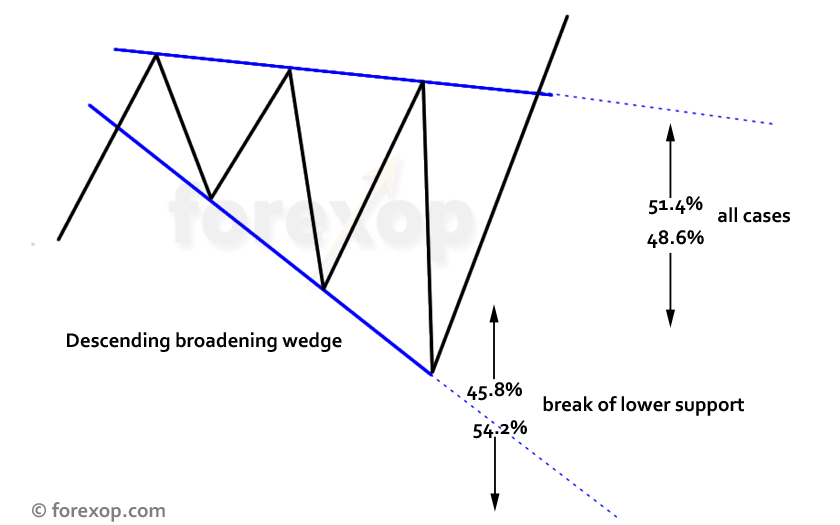 The odds are over 54% which is certainly better odds than a break in the other direction.

The diagram above shows the odds of the two outcomes:

To read about the ascending broadening wedge see here.