Home Strategies
Breakout trading is a technical trading style. The rationale behind it is simple. It involves trading in the direction of newly forming trends. This means entering long when the price breaks-out above an established resistance level, and entering short when it breaks below an established support level. 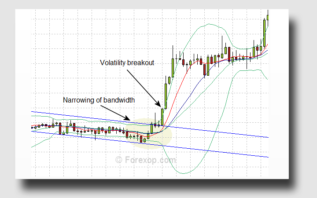 Many breakout traders also use opportunities when the price breaks-out of any type of trading pattern. This can be a triangle, a head-and-shoulders pattern, a flag, a box channel as well as the more common support and resistance levels.

This type of style seems counter-intuitive to a fundamental trader. A fundamentalist’s goal is to buy below fair value, and sell above. The idea of buying as the price makes new highs, or selling as it reaches new lows, as breakout trading does, goes against this viewpoint. Despite this, technicals are influential in the near-term and breakout strategies that exploit them can be highly profitable.

The appeal of breakout trading is clear It is easy to grasp and is a quick win strategy that can lead to high profits. The largest profits in any market usually lie in the first few bars of a newly forming trend – this is where the strongest price acceleration is. Explosive breakouts often take place after volatility squeezes (see below). The breakout trader aims to be in at the beginning of these powerful trends. 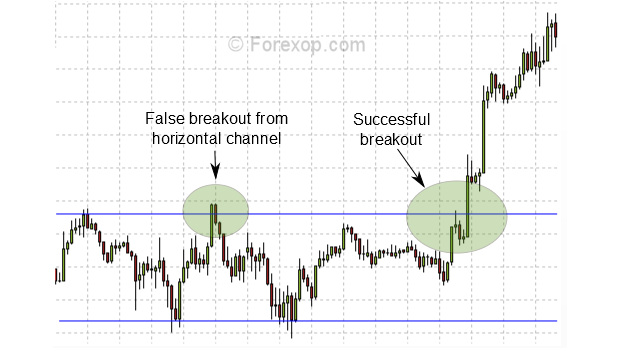 Breakout events are extremely common in Forex charts. They also occur across different time frames. Nevertheless, having a good grasp of technical analysis is necessary to identify which of these are worth trading and which are best avoided. Technical indicators allow the breakout trader to judge how robust a given channel is and if a break attempt is likely to be successful or not.

Most breakout traders use a combination of other inputs to form their decision. However, in the end, it often comes down to experience and gut instinct. The occurrence of false breaks also makes timing decisions difficult.

How to Avoid False Breaks

Those who try this strategy soon learn that false breaks are its “Achilles’ Heel”. According to most estimates, at least fifty percent of Forex chart breakouts are “false breaks” or “fake outs”. With a false break, the price breaks out of a range temporarily, only to pull back again shortly afterwards.

Wait for the retest To counter these situations some breakout traders wait for the previous level to retest before entering the trade. They wait until the price reverses and retests the boundary at least once. They then only enter the trade if the retest succeeds (or fails if you are a range trader), and the price bounces back. This is shown in Figure 2.

A successful re-test on the downside suggests the previous resistance has become a new support. Conversely, a successful re-test on the upside suggests the previous support has become a new resistance. Stop losses are placed so that the position is closed if the price moves through the boundary, back into the range a second time. This is not a guarantee. It does though increase the odds of catching real breaks rather than a fake. 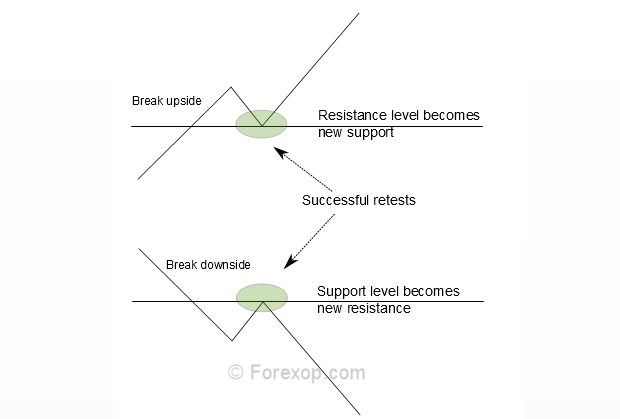 This is because the second move suggests there is genuine momentum driven by real supply or demand. Using it means the trader enters breaks that have a higher probability of success. On the downside, it does mean capturing less of the move because of the delay on commitment to trade.

It is always good practice to check key support and resistance levels by looking at the chart in several time frames. Fibonacci extensions/retracement can help in deciding your entry and exit points after these key levels are identified. Using additional signals that confirm direction at a support/resistance also provide an advantage.

Why Are “False Breaks” So Common?

There are two reasons why false breaks happen so often.

Range traders Firstly, there are more range traders than there are breakout traders. These traders believe that the most likely course is that the price remains within the established range. Range traders see the break as an anomaly. They need to see a significant break from an established channel before they will consider it permanently breached. Given this, range traders are likely to trade against the breakout. They become faders.

Dealers The second reason is dealer manipulation. Dealers may look to stir-up a quiet market and stimulate volatility. A dealer can estimate from order flow, that there probably is not enough interest to break out of a range. Even so, they may test weaknesses in the trading channel by pushing their quote.

They do this especially when they’re axed, or have a need to trade in a certain direction to reduce their net position. This may cause some breakout traders to enter prematurely.

As a result, other breakout traders may do the same as they see a newly forming trend, which will build momentum. More often than not though there is no real follow up. The gap closes and the price re-enters the range trapping those caught on the wrong side.

Range traders also tend to trade against these types of moves, which adds to the strength of price pullback into the original channel.

Given the high failure rate of breaks, some traders believe it more profitable to trade against these events. That is, to trade in the opposite direction to the breakout move. This is called fading. There are some who say that most faders are converted breakout traders who have given up and resorted to reversing their strategy. Caught out too many times by false breaks, these traders believe the reverse strategy to be the more profitable one.

People often say that the main drawback with breakout trading in Forex markets is that there are no reliable real-time volume indicators. In my view this issue is a bit overblown. If you have ever traded “on exchange” products, you might have seen the flow of orders, which is sometimes made available for traders to see as part of the exchanges’ commitment to transparency.

This allows you to watch in real-time the orders flowing through the exchange. From the order flow, a trader can determine the supply and demand and watch for any liquidity gaps. A gap in liquidity can cause high volatility without a clear price direction.

This is a major problem for breakout traders because liquidity gaps are where many failed breaks occur. However this mostly happens when trading relatively illiquid markets such equities.

Knowing the variations in daily trading volume will help you to avoid false breaks on predictable light volume and session handovers.

When trading most major currency pairs, the kinds of liquidity gaps which you see with equities for example, just don’t happen. In Forex there are always periods of light and heavy order flows as the major markets open and close. However volume is relative. 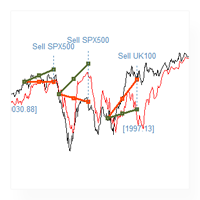 Momentum trades The main challenge of the Forex breakout trader is to identify if a break has momentum behind it, or if it is just dealers pushing the quote around to try to stimulate activity. Some brokers will provide their own volume data as part of a market data feed. If so, this can be valuable input. There are also proxy volume indicators, such as on MetaTrader that can be useful.

Keep in mind the time of day and the pair you are trading. Familiarize yourself with the regular daily fluctuations in volatility. Regular variations happen because of the opening, closing and overlap of the regional trading sessions. Knowing these variations will help you to avoid false breaks on predictable light volume and session handovers.

Using multiple trade entries is always good practice with this style. When trading breakouts it is especially important due to the high probability of price reversals. A system of staggered entries, also called a grid system can work in your favor.

With a grid, you can create your orders in such a way that you divide your risk over a number of smaller trades. This is safer than committing to one big all-or-nothing trade. With this strategy, you build up the position as you gain more confidence in the reliability of the breakout. This is shown in Figure 3.

With a grid, depending on your chosen setup, you can also profit either from a straight through move, or from a whipsaw-move, that crosses all levels.

Bollinger squeezes or volatility squeezes often happen just before powerful breakout events. This is why it is important to know them and identify them. They can provide you with the most profitable breakout trades.

A lowering of volatility causes a contraction of the bandwidth. The chart above shows type of event. Squeezes often happen prior to news releases and announcements. They can also happen during trading session handovers. This is because traders in the open session pause to assess the sentiment of the major markets such as London or New York as they come into play.

False breaks do still happen here. These are especially common after important news events. A separate article on trading economic news explains the reasons for this.

How to Use Breakout Trading

If you want to try breakout trading, the following resources may be of help: