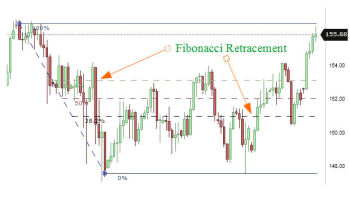 It’s been known for years that mathematical patterns are commonly found in financial charts – including forex. Fibonacci series and the Golden Ratio are two phrases you’ve most likely heard about before.

Even though they are well understood, profiting from these quirky indicators is far more difficult than it may at first seem.

As with all technical trading patterns, understanding the likely price action around the key reversal levels is as much an art as a science.

Even if you’re not an adherent of technical indicators, the fact that people believe in them, and pay attention to them means that predictable patterns in price action do often occur around these levels. Though whether this has anything to do with Fibonacci ratios or not is debatable.

The chances are, if you look at any stock, or currency chart, and measure where the key trend reversals are, they nearly always occur at these critical Fibonacci ratios.

For this reason, it’s a good idea to have a basic understanding of Fibonacci indicators, what they are and how they work. This is true, even if you’re not going to use them in your strategy, ever – I’ll explain why shortly.

So What Is Fibonacci Retracement?

Without getting into the mathematical detail, the Fibonacci is a numerical series where any given number in the list is made up of the sum of the two preceding numbers. Here’s the first part of the series: 0,1,1,2,3,5,8,13,21,34,55.

There are three key ratios that are the relevant here:

These ratios are calculated by dividing a number in the series by it’s neighbors to the left. So for example the first ratio is, 13/21 = .619 (I picked 21 here but any will do).

As far back as Leonardo da Vinci 600 years ago, it’s been known that the Golden Ratio occurs time and again in patterns in nature, and in fact even in our own bodies.

So what on earth has this got to do with trading?

The chances are, if you look at any stock, or currency chart, and measure where the key trend reversals are, they often occur at these critical Fibonacci ratios – at least more often than you’d expect by chance alone.

Don’t worry about the calculations. You shouldn’t ever need to work this out by hand. Most charting software – or those your broker provides, will calculate and display the Fibonacci retracement lines for you. You just have to pick your start and end points and the rest is automatic. See Figure 2 for example.

Figure 1: Example Fibonacci retracement zones that occur after a move from B to A © forexop

Fibonacci Extension The Fibonacci indicator can also be used the other way: that is to extend outside of the range to indicate likely support and resistances. This is called Fibonacci extension – the idea is exactly the same. Instead of the lines being drawn within the range, between two points, they are used to extend the range, in either direction.

Another property of financial markets is the so called “fractal effect“. Zoom-in on any part of a chart and chances are you’ll see the same patterns occurring over and over again at different time scales.

This is also true for Fibonacci levels. In the above example I’ve given, you’d most likely also see Fibonacci retracements occurring at a finer and finer levels – on shorter time-frames. For instance between the points 1.3423, 1.3438 you’d commonly see another set of retracements, and so on.

How Do I Profit from Fibonacci Retracement?

If you look at any historical forex charts, you’ll see that Fibonacci retracements occurs with some regularity. It’s for this reason, it’s considered a useful indicator.

When setting up your trades, it’s worth keeping in mind that the Fibonacci levels should be treated as “zones of possible price reversal”, rather than exact, definitive levels. Prices rarely reverse exactly at the ratio points, but more likely close by.

In so doing so, they can cause a “micro capitulation” – whereby a large number of stops are triggered simultaneously and cause a cascading effect. During these events, the price typically overshoots the expected retracement zone by some distance.

Even though a reversal occurs, traders often don’t profit because they’re stopped-out as the price over-extends the retracement area.

Tip When setting stops or limits, a good rule of thumb is to allow a margin around the Fib level where you’re expecting the reversal to occur.

Also keep in mind that if a retracement level has held good in the past, this increases the probability that it will hold again in the future. The Fibonacci resistance or support level becomes stronger each time it’s tested and holds out.

In this way, the Fib levels often trace out distinct bands over time where “range trading” can be extremely profitable. These ranges can last months, or even years in some cases.

Fibonacci retracement and extensions are key indicators that you should try to learn as a new currency trader. Simply because these patterns occur often in charts, and they’re considered to be of relatively high reliability.

If you plan on using Fibonacci levels in your strategy, always be prepared for break-outs occurring at or around the reversal levels, and act accordingly. Try to anticipate how other traders are positioned with respect to these levels, and from this, determine which scenarios are most likely.