Home Strategies
Perhaps one of the simplest trading strategies of all is that of the moving average crossover. Simple and exponential crossover strategies have a wide variety of uses. They are straightforward yet can be surprisingly effective. Crossover is best suited to trend following and momentum strategies.

A number of sophisticated trading systems use crossover as their underlying approach. Taking the basic idea, they refine it to improve its reliability and to lessen the problem of false buy/sell signals and latency.

How Do Crossover Strategies Work?

The principle behind the crossover system is that it tells us a trend is changing.

To understand this, take a look at the four charts in Figure 1.

At time t+3, all three lines are falling. The price, moving average 1 and moving average 2 are now all on the same path again after the price changed direction from rising to falling.

Finally at time t+4, the price starts to rise again and the same process happens again but in reverse. The blue line is the first to react to the price turning followed by the red line.

The longer the period of the average, the more stable the line is but the slower it is to react to changes.

A crossover occurs when two different moving average lines cross over one another. In the chart above, time t+2, and t+3, show a bearish crossover. This takes place when a fast moving average crosses down through a slow moving average. This implies that the trend is falling or becoming bearish.

At time t+4, the trend changes again and this produces a bullish crossover. The blue, or fast moving average, is the first to react. It crosses up through the slow line. After the crossing, all three lines then follow the same path as the trend continues upwards.

Some might say why not just look at the price, because that tells us instantaneously what’s happening. The reason for using the averages rather than the price is that in real markets, trends do not move in straight lines but rather follow meandering paths with many false stops and starts.

The purpose of the average lines is to smooth out the random movements and discover the underlying price trends.

Which Averages Should You Use?

The first and most basic problem that a crossover trader faces is which moving average pair to use.

In hindsight we can always back test a market to find some unique moving average pair that will create a profitable strategy. Yet this is of little use because as we all know the past is not necessarily a reliable predictor of the future.

The Death Cross and the Golden Cross

The other decision is in the formula that is used to average prices over time. Simple moving averages apply the same weighting to all prices.

Exponential moving averages would on the face of it seem to be better suited because they will be more responsive to recent price changes. But at the same time this also makes them more responsive to extreme and sudden price moves. This may or may not be a good thing, depending on the market conditions.

Typically, in SMA and EMA the price taken at each interval is the mid-price. Yet this can change and sometimes the open or close price is preferred.

The most basic moving average crossover strategy is as follows:

We tested the SMA-50-200 strategy on five of the principal currency pairs, EURUSD, USDJPY, GBPUSD, USDCHF and USDCAD. The test was done using the past ten years’ worth of historical chart data using  the hourly period chart (H1).

Using the principle of equal risk and return we categorized each trade entry as correct or incorrect depending on the direction the market took, taking into account drawdown periods.

The table below summarizes the results of the test.

Over this time frame then, our simple SMA strategy produced a result slightly better than expected by chance alone.

On the daily chart, the results were comparable, though the number of crossings is less than the hourly test.

We performed the same test using the EMA-50-200 strategy. The results are summarized in the table below.

In our tests, the EMA proved to be less successful than SMA. The EMA strategy produced 51.2% correct bearish entries, but only 49.9% correct bullish entries. This result is no better than random.

The EMA strategy performed much better on the daily chart.

One of the complications all crossover strategies need to deal with is that of false crossover signals.  False crossings or false crossovers happen when the moving average lines cross one another briefly, but then revert back again.

On the chart this means that the trend only changes direction for a short time but then continues in the same direction. Figure 2 shows an example for USDCAD – United States dollar versus Canadian dollar.

Here with USDCAD, a dip in the bullish trend is enough to generate a crossing of the 50-200 day moving average.

However, the market turns bullish again and shortly after the false sell signal, a new buy signal is generated. This would almost certainly have resulted in a loss on the short positions, though this could have been recouped if the subsequent buy signal was acted on.

The other issue faced by crossover strategies, and most technical strategies in general, is that of latency. Latency is the delay and the consequence of it is that by the time the signal is triggered, the market has already turned again. 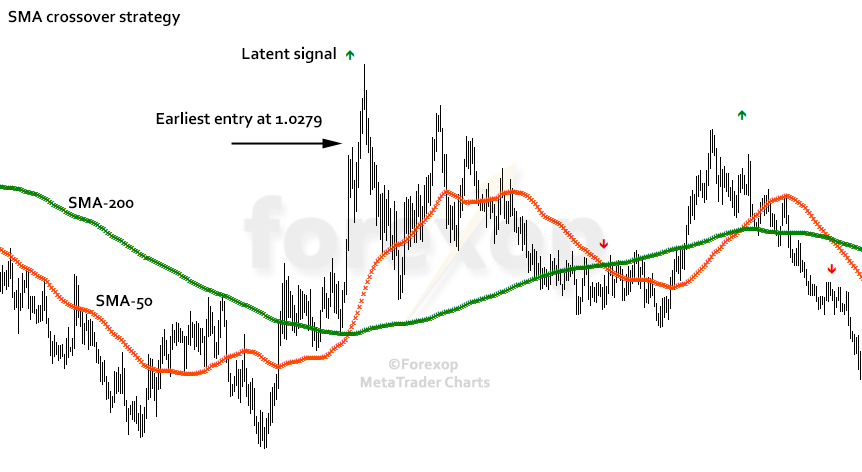 The chart in Figure 3 shows USDCAD daily again. Here the buy signal appears after a strong bullish breakout. The crossover duly takes place however by the time the crossover triggers the buy signal, the bullish move is nearly over.

By following the strategy, the buyer would enter at no lower than 1.0279, but the market peaks 7 days later at 1.0658. Then the trend turns bearish again and soon falls well below the buy entry level.

There are a few ways to overcome or alleviate the above weaknesses in the crossover strategy. One is to use a position accumulation method. With this, the position size is increased or decreased according to risk.

In this way, the position is only increased as and when a trend develops in strength. False signals are still produced, but they are exited quicker so the amount risked on each new trend is lower. This is one of the cornerstones of the Turtle Trading System. The Turtle however uses a shorter moving average pair.

The thinking behind accumulation is that false signals can’t be eliminated altogether but instead we can increase or decrease the risk according to a trend’s longevity.

Alternatively, there are enhanced crossover strategies that try to alleviate some of these problems. The Triple EMA and Double EMA are two such examples.

Crossover strategies are simple yet as we’ve shown can be profitable under the right market conditions. This important class of strategy is often the foundation of more advanced trading systems such as trend followers.