Home Strategies
TRIX or the triple exponential moving average is a trend analysis system that has been around since the early 80s. You can use it to analyze trend momentum and reversals – TRIX is deployed in various swing trading, scalping, and day trading strategies. This article describes a basic TRIX crossover strategy. 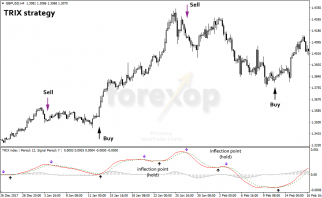 After calculating the third series the next step is to calculate its first derivative, or rate of change. From this we obtain the TRIX value:

The signal line is the exponential moving average of the TRIX at the chosen signal period. When plotted together on the same chart, the intersection of the TRIX line and the signal line provide us with information about trend and price momentum.

The TRIX is a rate of change indicator. That means its value can be either positive or negative. The TRIX value and the signal swing up and down around the zero line in response to the underlying trend.

A histogram is an additional output that is sometimes useful and this plots the difference between the TRIX line and the signal line. The histogram shows places where there is a deviation in the TRIX and signal line. This highlights areas in which the trend is changing, either slowing down or speeding up.

TRIX is similar to the MACD. Both identify times when the market is potentially overbought and oversold. Both TRIX and MACD create crossover events that can be useful for trading decisions.

Like most indicators, the TRIX has a period. The period of the TRIX determines the size of the moving average filters for both the signal and TRIX line.

Knowing how to calculate the TRIX is not necessary to use it. There are several TRIX indicators available that will do all of the calculations for you and plot the output on the chart.

The Value of the TRIX

The value of the TRIX lies in its ability to detect changes in trend direction. The triple layer of averaging means that it is less sensitive to random price fluctuations. Therefore, TRIX is less prone to false reversal signals than are some other systems.

The main use of the TRIX system is in analyzing crossover events. These indicate places where the trend has reversed or might be about to reverse. Most TRIX trading strategies use this information for entry and exit timing. 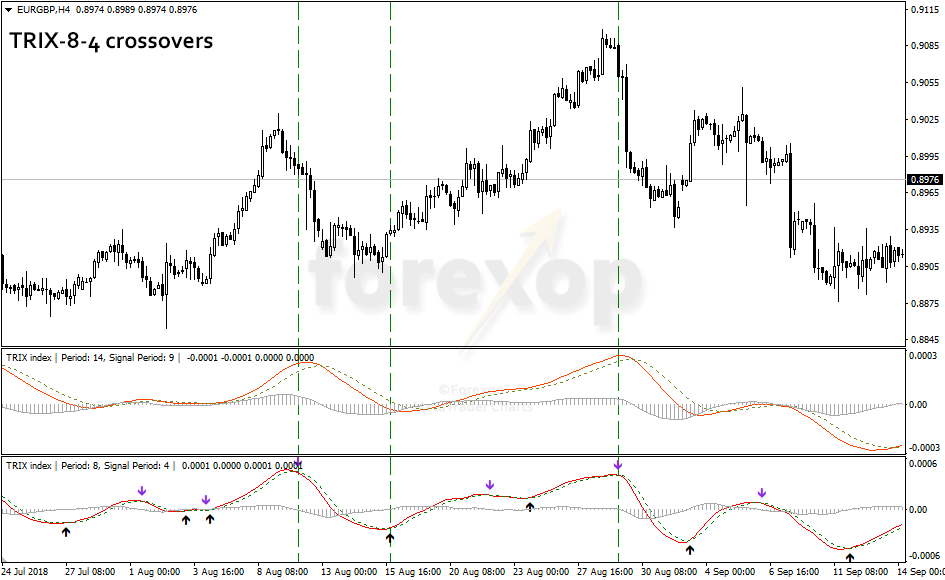 To analyze the chart at a chosen timeframe, the TRIX is set with an appropriate period. A starting point is a TRIX period of 12 and a signal period of 8. Test at various settings to make sure the crossovers are detecting the historical reversals without too many false positives.

The TRIX trading strategy is:

As an additional confirmation, it is helpful to check the divergence between the price and the TRIX line. 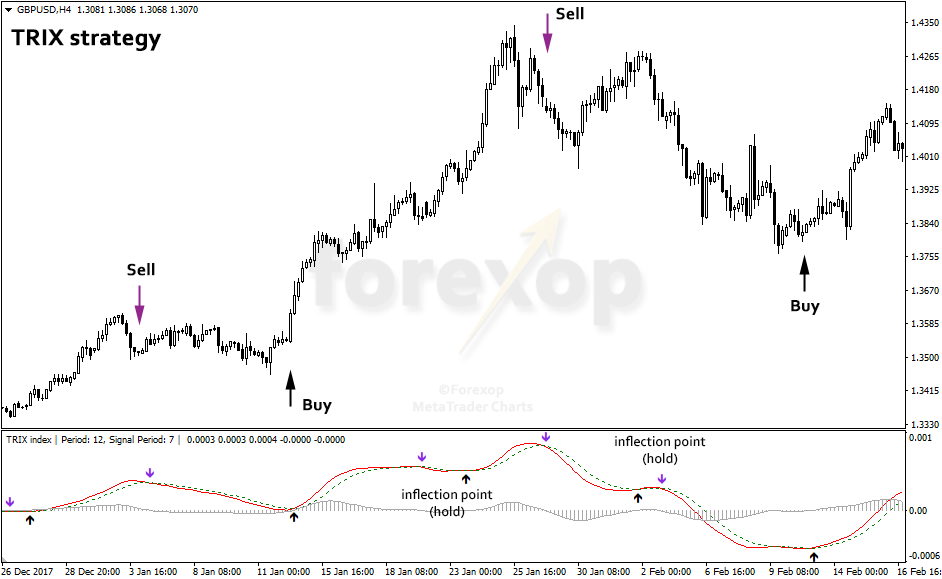 Because of the averaging, the chances are that when a strong TRIX crossover takes place it is signaling a change in trend rather than simple market noise or a brief pullback.

The highest and lowest TRIX outputs happen when a trend is accelerating. This often happens just before a reversal. The crossover of the zero line does not necessarily have any significance because it usually happens well after the crossover of the TRIX and signal.

Like all other indicators, the TRIX is susceptible to false reports also known as false positives. In the TRIX system, these occur usually where the output lines cross or touch briefly but then reverse again. These are inflection points (Figure 2).

False positives will increase when using a shorter TRIX period and decrease with a longer period. A longer period will produce a longer lag between the times the trend changes and the time the TRIX crossover happens.

Using the rate of change of the TRIX line helps to filter out inflections. After analyzing a particular chart, you will be able to determine a threshold percentage where false positives are occurring. That becomes the threshold line so that only buy/sell signals above the threshold are valid.