Home Strategies
This momentum strategy is very straightforward. All you need is the Bollinger bands indicator and to do some basic checking of chart candles. It works on chart patterns that display signs of pending momentum – that is upward or downward acceleration in price. 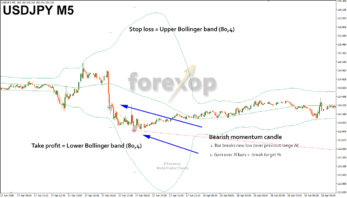 Looking at “price action” means looking down to the level of individual bars (candles) on the chart. As this is a price action strategy it makes it ideal as a day trading system or for quick in-out trades.

Price momentum means that the price is changing rapidly and forming an upward or downward trend. To satisfy the trading condition, there are two separate rules. Firstly the current bar must have broken a new high (low for sell). Secondly the candle pattern must have risen (fallen for a sell) by an amount equal to a break range over a set number of bars.

Only closed bars are considered – that is where the high/low and open/close are all known.

If you are using a chart at a higher or lower time scale you will need to adjust these settings accordingly. For example, with most currencies it’s rare to see the price rising by more than 0.5% over 3 bars on the one minute chart. On the other hand on the one hour, four hour and daily charts such price changes are not unusual.

The diagrams below explain the trading rules. 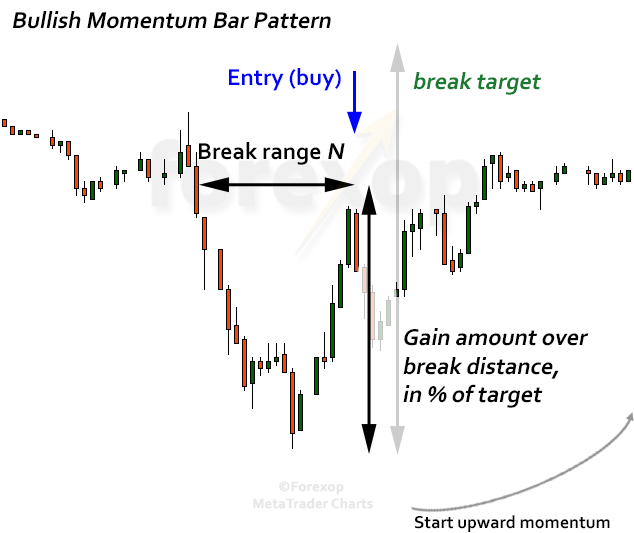 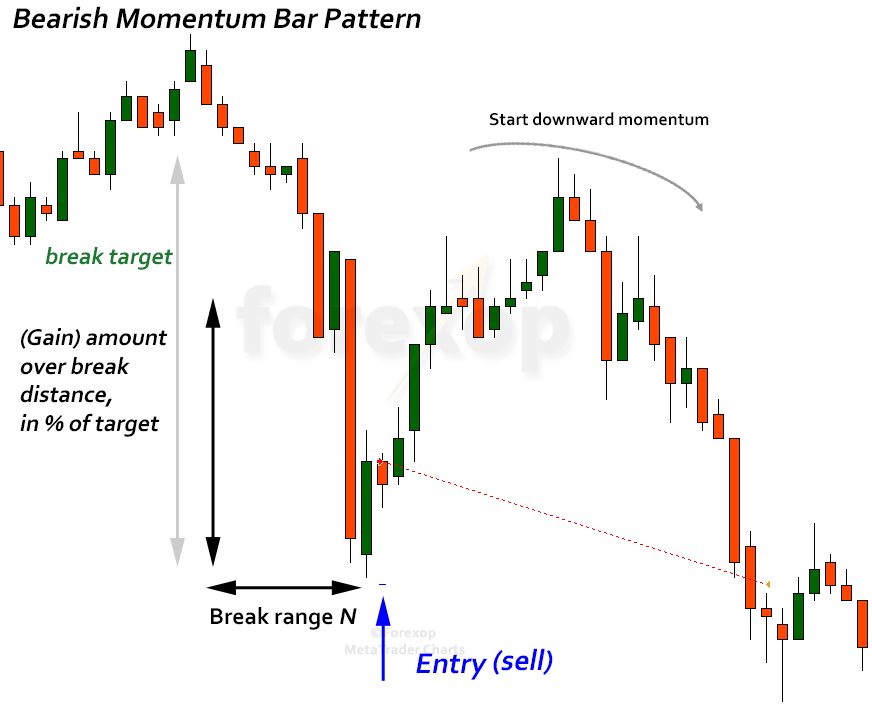 The trading rules can be loosened or tightened accordingly to produce more or fewer trade entries.

When you increase N, the break range this means the high (or low in the case of a sell) of the last closed bar must have made a more significant upward break than when N is set to a smaller value. In other words, you are looking for larger and more significant chart patterns. When you increase N, it also makes sense to increase the Break Target. For instance, you’d be more likely to see a price rise of 1% over 20 bars than you would over 2 bars.

With a stricter filter, you will get fewer trades but usually ones that are higher quality.

The table below demonstrates this. There were four test runs on the USDJPY five minute chart where each run uses a different break target. Volume was 0.01 lots per trade.

The stops and profits I use with this system are taken from the Bollinger bands. In the examples shown I’ve used a Bollinger band with period 80 and 4 deviations.

The sell side is just the reverse. The take profit is set to the lower band and the stop loss is the upper band.

Examples are shown in the figures below. 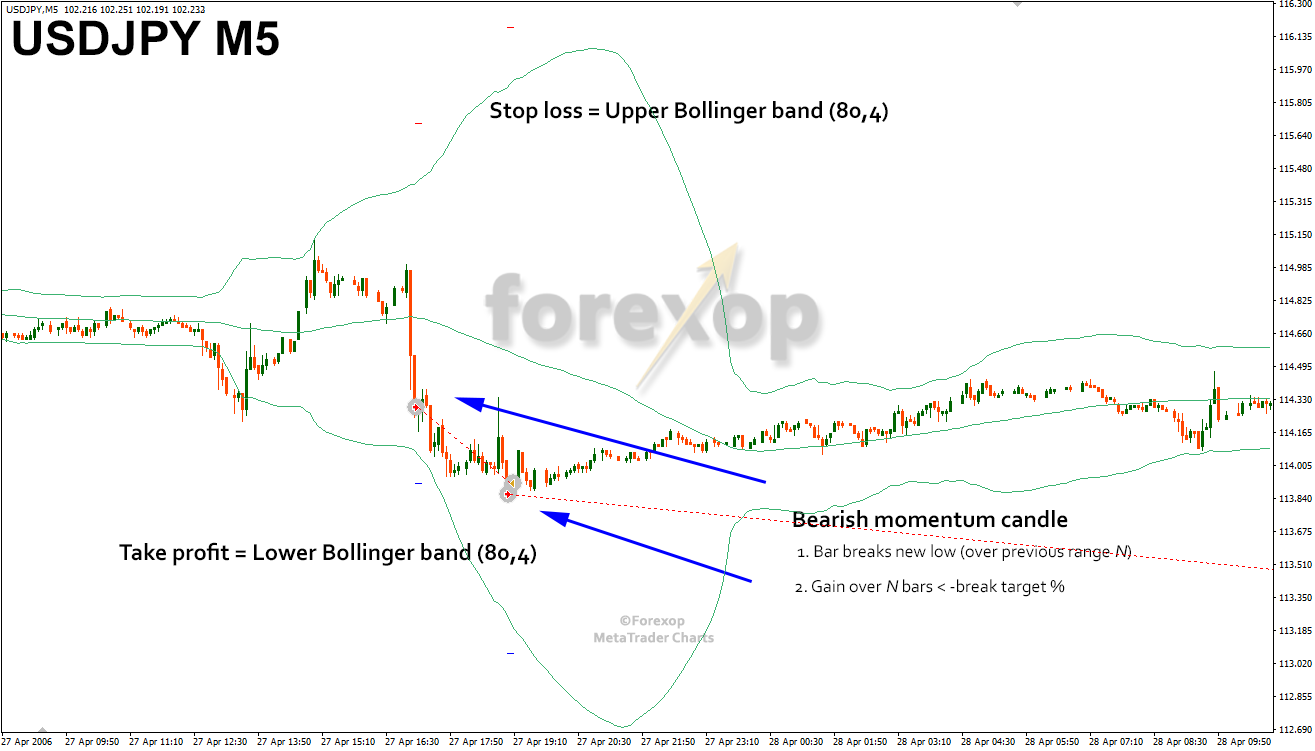 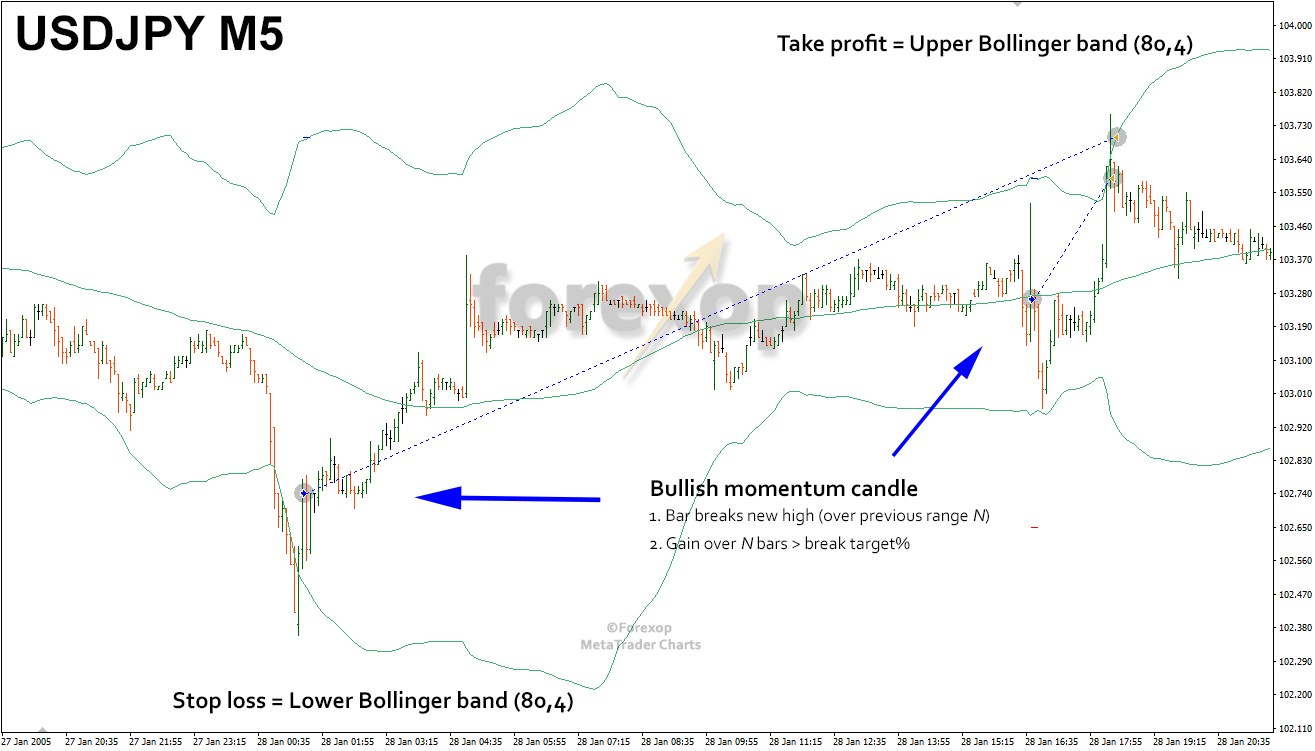 With the wide band settings I’ve used this is less likely to happen, but just in case I add a buffer either side of the bands so that the stop and profit levels will always be valid.

Another option is to use minimum thresholds for the stop and profit distance to avoid any invalid cases.

When using Bollinger bands to set your trade exits there won’t be a deterministic ratio of profit and loss on each trade. For example, with a buy side trade when the price is attracting towards the lower Bollinger band the stop distance will be much smaller than the profit distance.

The reverse happens when the price is attracting towards the top of the band. Here the stop can be much bigger than the profit distance.

As I’ve explained in more detail in my other article, there isn’t necessarily any advantage or disadvantage to this.

What is very important though is that any succession of losses is easily survivable and that boils down to sensible money management.

To see an example of the entire trade sequence let’s look at two cases on the USDJPY five minute chart. A sell-side trade entry happens at the bar shown in Figure 5 below. In this example, I’ve used a break range (N) of 6 bars, and minimum break target of 0.1% of price.

The actual values from the chart are shown in the table below.

The conditions for the first trade (#1) are met because:

This produces a take profit of 86 pips and a stop loss of 346 pips.

The complete trade setup is shown in Figure 5. 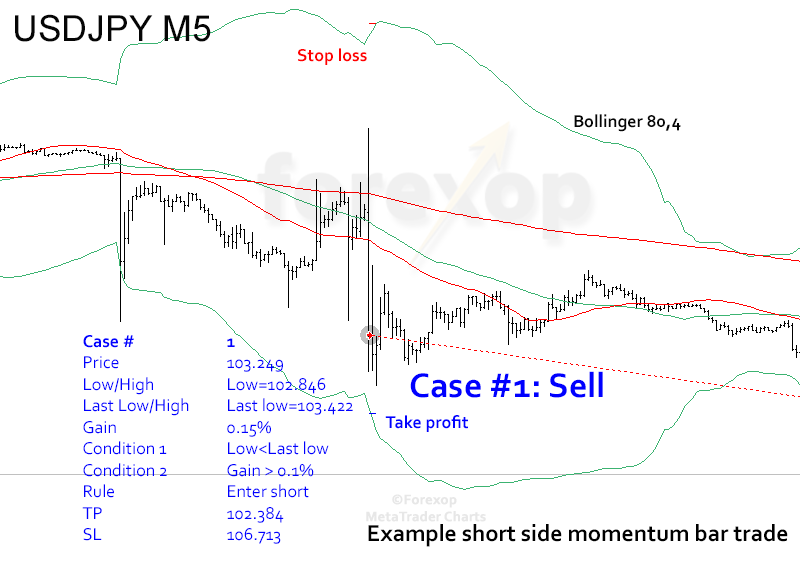 The second case shows a buy-side trade entry. At this point USDJPY is at 111.396. The high reached on the last closed bar was 111.534. The conditions for the buy trade at #2 are met because: 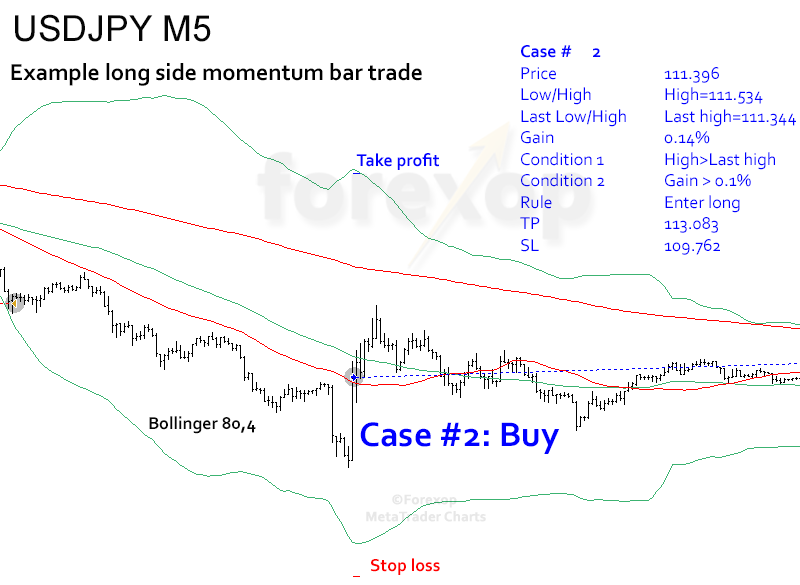 The back tests were done over a 10 year time frame using five minute charts. The starting balance was $10,000 USD in each case. The test runs are shown in the table below. I used the same settings as the examples given above. As I mentioned, the number of trades and reliability of trade entries can be increased or decreased as necessary by adjusting the input parameters.

Stricter conditions will result in fewer trades as this will filter more entries with a low probability of a profitable outcome. On the other hand looser conditions will increase the number of trades but expect on average more “lower quality” trade entries to pass through the filter.