Home Economics
Employment reports are one of the leading indicators that can tell us if an economy is improving or worsening. The number of jobs added or lost over a certain period is a strong guide to future interest rate movements.

Data from the United States, such as NFP (Nonfarm Payrolls) can have a high impact not just on the US dollar but throughout the financial markets and especially in other currency markets. Apart from central bank policy meetings, the NFP is one of the most closely watched  of all economic releases. 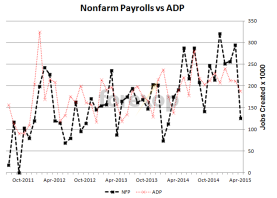 When is it Published?

It is released as part of the employment report on the first Friday of the month, and the report gives the net change in U.S. jobs for the previous month. It excludes certain categories such as government and agricultural jobs. This is where the name comes from.

Stocks, bonds and especially currency markets can be very volatile not just during the release of NFP but also with later revisions. This can be particularly extreme when the numbers surprise the markets. As with GDP (gross domestic product), you have to dig into the report, and put it into context to get the picture.

Short-term reaction to a higher NFP number is U.S. dollar strength. Longer term, other factors can overrule this trend.

What Does it Mean?

Figure 1 shows the close link between employment, as measured by average monthly change in thousands over the year, and U.S. short-term interest rates. As the chart shows, for at least 20 years, the interest rates have tracked employment cycles within the economy to a fairly close degree.

This highlights the well-known fact that the Federal Reserve uses employment data as a key indicator of economic health. As such this plays into the Fed’s interest rate decisions.

Anomalies Notice how the link between interest rates and employment has temporarily broken since 2009. One likely explanation is that quantitative easing is pressing down on yields across the board. The billions of dollars of liquidity that the Fed pumped into the financial system over this period, purchasing debt, kept market interest rates below normal levels.

Based on past business cycles, rates would probably have be at around 3-4% by this time. As QE is tapered, going forward we will likely see a return to the normal NFP/interest rate relationship. 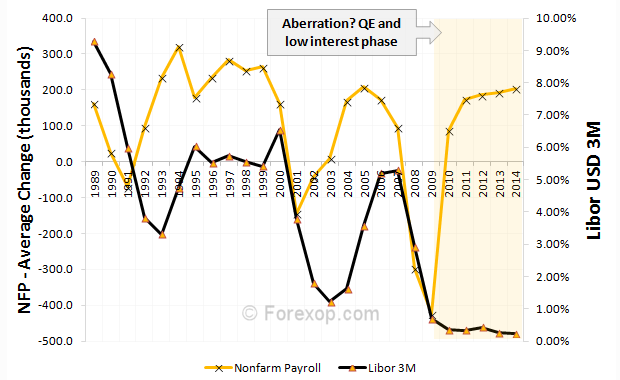 How to Trade NFP

To get an idea of how to trade the NFP release, you have to take a look back at the data from a historical perspective.

As a rule, the technical, or short-term reaction to a higher NFP number is U.S. dollar strength. Longer term however a multitude of other things come into play. While a strong jobs growth number means a robust economy, it can be seen by traders as a negative – depending on the point in the economic cycle.

In an early stage economic recovery, that is just starting to add jobs, a high number is a strong plus. It probably means the early stages of increasing interest rates. In the later stages of the economic cycle, full employment adds to inflationary pressures, which is a negative, and a peaking business cycle often hints policy makers will  cut rates further down the line.

USD is a Special Case

One challenge in trading NFP is that the U.S. Dollar is a special case. It is the global reserve currency. This means among other things it naturally tends to be a defensive holding. Currency traders play into U.S. Dollar strength anticipating defensive backing during recessions.

The chart in Figure 2 compares NFP to the trade weighted U.S. Dollar index. This shows how USD strengthens in major global recessions, regardless of falling employment. For example, between 2000/2001, and between 2008/2009.

It also shows an uptrend in the U.S. Dollar Index after 2011, tracking the improving employment numbers. When the global economy improves, and the U.S. economy is a big part of that, it leads to higher risk tolerance everywhere. This causes outflow of funds towards higher risk economies and currencies and away from defensives.

This is a cyclical influence on the U.S dollar that all currency traders need to understand.

Figure 2 shows that between 2001 and 2005, despite strong job creation, the dollar was still falling sharply. This was for two reasons. The first reason was concerns over the ballooning U.S. current account deficit.

The second, but more important reason was unwinding defensive positioning following global turmoil between 1997 and 2001; the deadly four: Asian crisis, the Dot Com bubble, Enron, and 9/11. 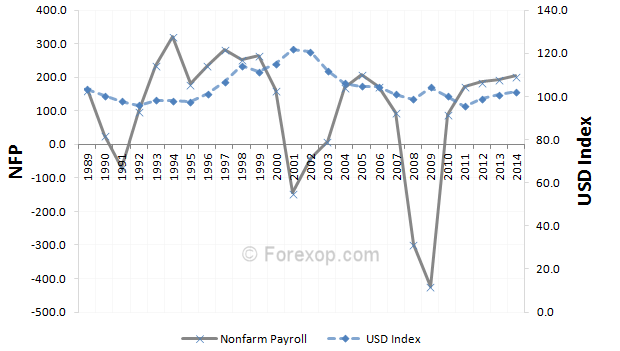 A nonfarm payrolls trading strategy should depend on time frame. As with other economic releases, employment reports must be analyzed as part of an entire cycle rather than a single number. This way, blips and outliers are not mistaken for real trends.