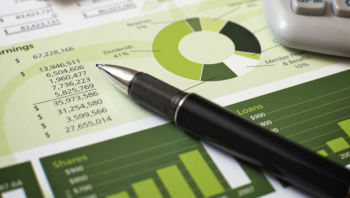 You have probably read a lot about balance of payments and trade deficits in the financial press, but these reports often do not explain how and why these things affect currencies. A country’s balance of payments (BoP) is the record of its financial transactions with the outside world. What does it mean when a country has a trade deficit and what does it mean for the currency?

Inputs To understand this, it helps to think of countries simply as entities that earn and spend, just like a business. There is no need to worry about what is going on inside because the balance of payments only records transaction into and out of the country, not what is going on within.

When a country is importing more than it exports, this means it has a balance of trade deficit. In other words, it is consuming more than it is producing. Why does this matter for the currency? To pay for imported goods and services, importers have to sell the domestic currency in the foreign exchange market to pay for them. This is money being spent, or leaving the country to pay for something. The balance of trade records these inflows and outflows.

The rule that trade deficits are bad for currencies and surpluses are good is over simplistic.

Just like a person or a business, a country cannot go on spending more than it earns forever. However, the rule that deficits are bad for currencies and surpluses are good is over simplistic. The borrowing may be good risk because it is adding value to the economy, or bad risk because it is not, and that determines how the currency markets will react.

Why Do Trade Deficits Occur?

Just like businesses, economies sometimes need to borrow to grow. Let us look at a toy example to explain this in more detail. Table 1 shows the balance of trade over five years for a fictitious emerging economy. In year 1, the country imports $200b worth of goods, and exports $400b. It has a trade surplus. In the following year, it imports $350b and exports $200b, so in that year it has a trade deficit. By year 5, the trade deficit is $520b.

The total deficit (trade gap) over 5 years stands at $1370b. This is the total balance of trade. What does this mean? It means, the country has spent $1370b more than it has earned over this period. The amount, $1370b represents wealth that has left the country over the five years and is now in the hands of foreign investors, governments and corporations. It will be in cash, bonds or other assets denominated in the currency. Economists call this the capital account.

A common misunderstanding is that this money just gets recycled in the FX market and comes back to the country, albeit with a lower exchange rate. This is not the case. Transactions in the FX market would simply change ownership from one foreign owner to another. The amount above, $1370b is money spent by this country, and the only way it can come back is through foreign trade or investment gains.

For example, suppose in year 1 a big corporate had invested $1b in an overseas company. By year 5, that company has become more profitable and is now worth $25b. The country’s balance of payments would look like this:

The capital account, which is the sum of the current account and investment account, is $1346b. This money has left the county, so foreign investors must now own this amount of the country’s capital. The gain of $24b is wealth earned abroad, and will come back through the FX market into the country’s private sector coffers. It therefore offsets the capital account by the same amount.

Are Trade Deficits Always Bad for a Currency?

What happens to the currency will depend on how foreign investors view this economy. If the deficit has grown because businesses are buying raw materials, to grow the economy, to add value to their produce, and to build infrastructure, it can be a positive. In this case, investors will be rushing to buy bonds and stocks in the country’s currency, because the country is investing wisely in future growth. It is a good risk.

Investing in growth Foreign investors are funding the imbalance, temporarily while the economy is expanding. They do this because they will probably gain a good return on those assets. This will happen if the economy expands and the trade balance returns to surplus in the future. Think of this economy as a “growth stock”, one that is reinvesting profits for rapid growth rather than handing out dividends to investors. Growth stocks are more risky, but the rewards are high.

If the deficit has grown because businesses are buying raw materials, to grow the economy, to add value to their produce, and to build infrastructure, it can be a positive.

On the other hand, if investors see that the deficit is a result of bad debt, they will have a different view. If the deficit is growing because of growth in consumer borrowing and spending on items like plasma TVs and game consoles rather than businesses investing for the future, this is not likely to help the economy. Too much consumer debt and low saving rates can play a part in deficits because it enables individuals to spend beyond their means. Collectively that leads to imbalances in the economy. This is “dead money” because it will not fuel future expansion.

Without signs that the economy will grow, foreign investors will start to sell the currency. If that happens, the country can try to support it by selling its foreign exchange reserves, if it has any. Otherwise, the currency will fall in value, its stock market will fall, and its bond yields will rise as foreign investors try to get their funds back. This will correct the imbalance, often abruptly. The people of the country will end up poorer as a result. Their currency is worth less, their imports will become more expensive, causing inflation, and they will have to pay more to borrow in the future. 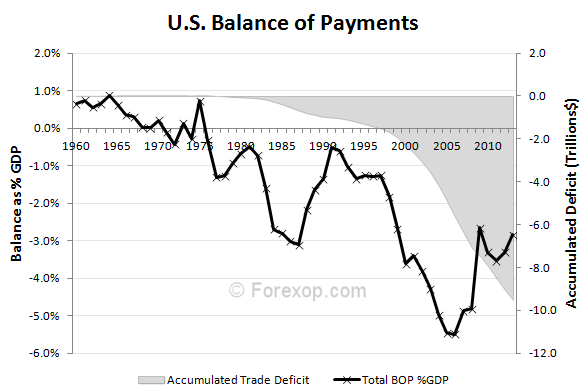 When a country’s deficit becomes large and sustained over long periods, it raises concerns, because the fear is of abrupt corrections that may destabilize the economy or even the entire global financial system. Most trade deficits and surplus correct themselves over time by a combination of floating exchange rates and economic growth. Currencies that have fixed or controlled exchange rates are more vulnerable to financial shocks because the currency cannot adjust naturally and this creates unseen pressures that are very difficult to predict. The collapse of the Thai Baht, for example lead to the Asian financial crisis in 1997.

Investors also worry the indebted country will purposely cause inflation to erode its debt, either by printing money or quantitative easing. When the currency devalues through inflation, the deficit falls because the real value of the foreign holdings in the capital account falls.

The risks For these reasons, holding cash or assets in currencies that have sustained large current account deficits is risky because the value of those assets may fall. However, the reward for investors taking that risk is future growth and an increase in asset value. This is why the currencies of countries with trade surplus often rise when investors are risk averse. Risk capital tends to flow back to its source.

The U.S. trade deficit, which swelled between 1998 and 2008, is starting to rebalance thanks to a number of factors, from a steady weakening of the Dollar to more homegrown energy, which is lowering imports. However, China and other emerging economies still hold huge U.S Dollar foreign reserves, which accumulated during the deficit years (see Figure 1).

Japan on the other hand is a strong exporter. However, a weak Yen makes Japan’s imports more expensive and adds to producer costs. Japan, which is scarce of natural resources, imports most of its energy and raw materials from other countries. As a result, since 2011, Japan’s trade surplus has become a trade deficit. Figure 2 shows the change in Japan’s trade balance along with the trade-weighted index of the Yen currency.

The Japanese have tried to encourage a weak Yen to help their exports. Their ultra low interest rates have made the Yen a choice of funding for carry trades, causing traders to sell it in volume. This has helped to keep the Yen weak for a long time despite Japan’s strong exports. 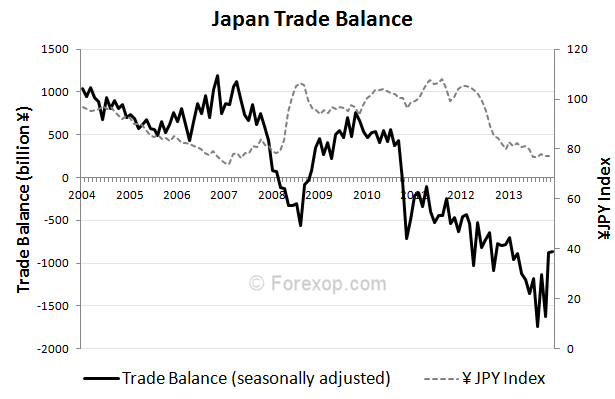 Trade deficits are a normal part of a global economy and are not always bad. However, currency traders need to figure out the story behind them.