Home Technical Analysis Candlesticks
A tweezer top in a chart is generally treated as a bearish reversal pattern. It suggests that the market is losing upwards momentum and is potentially about to start a decline.

Tweezer strategies are popularly used in forex, as well as options and futures trading.

How to Identify the Tweezer Top Chart

For a chart to satisfy a tweezer top pattern the following must hold.

Because the definition is quite general, the tweezer top pattern comes in a wide variety of forms. To be a valid signal the candlesticks don’t need to be of the same length. Often they won’t be.

The shadow lines which mark highs and lows can also be of different lengths. This leads to different appearances and interpretations. 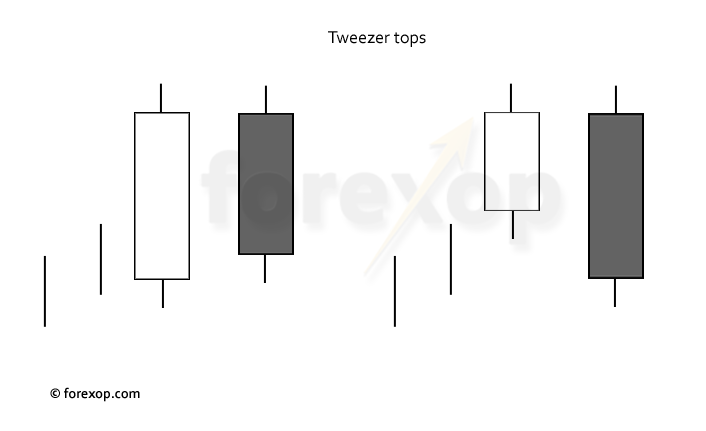 Higher or lower weight is usually given according to the length of the bars and the difference in appearance between the white and the black candlestick.

When the black candlestick is longer than the white the pattern can also be a bearish engulfing. This is usually treated as a stronger reversal sign than a tweezer top. This is especially true if the engulfing candlestick generates a deep price fall.

When the white is the longer of the two, the tweezer pattern can also be a bearish harami.

Where do Tweezers Appear?

When a tweezer appears in a chart, the market may be forming a top or it might simply be taking a pause. This is why we have to observe the strength of the pattern and look for other indications.

The tweezer appears both in uptrends and downtrends.

A rising market will often produce a high number of tweezers as the price breaks new highs, then draws down, but continues to rise again afterwards.

Less frequently tweezers appear in downtrends when the market makes a short bullish swing but resumes a downwards trend (see the chart in Figure 3). 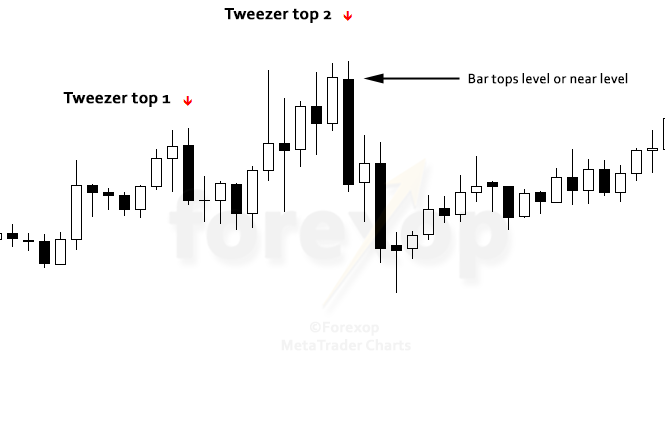 In both of these cases the tweezer is a continuation pattern rather than a reversal.

For that reason we have to separate the likely continuation setups from the reversals.

Meaning of the Tweezer Top

As with other candlestick patterns, the tweezer top generally only signals what may happen in the next few bars ahead. It doesn’t indicate further.

If we break down the pattern into its parts, the first candlestick in the pair opens low and closes high. That is it’s bullish. The next candlestick opens at or near the same level but the price then falls. This means the market fails to make any upward price movement at that point. In other words, either buyers are abstaining or selling is increasing.

The bearish candlestick in the pair represents a break in the trend where the market is prone either to a correction or a consolidation.

As the chart in Figure 2 shows, the tweezer tops are also borderline engulfing patterns. Here the bearish bar is almost entirely engulfing the bullish and is drawing the price lower. After the first tweezer we then see the market rising higher again.

Reliability of the Tweezer

The tweezer pattern is a weak reversal signal. That means we always have to look for other indications to judge the market’s strength on either side. As shown in the chart above, tweezer tops can frequently precede short pullbacks however the trend isn’t necessarily reversing at that point.

The image in Figure 3 shows a USD/JPY 1 hour chart. The market is bullish at this time but the trend weakens and it starts to form a top. We can see three tweezer top pairs, marked with red arrows, as the price proceeds to rise in the trend. 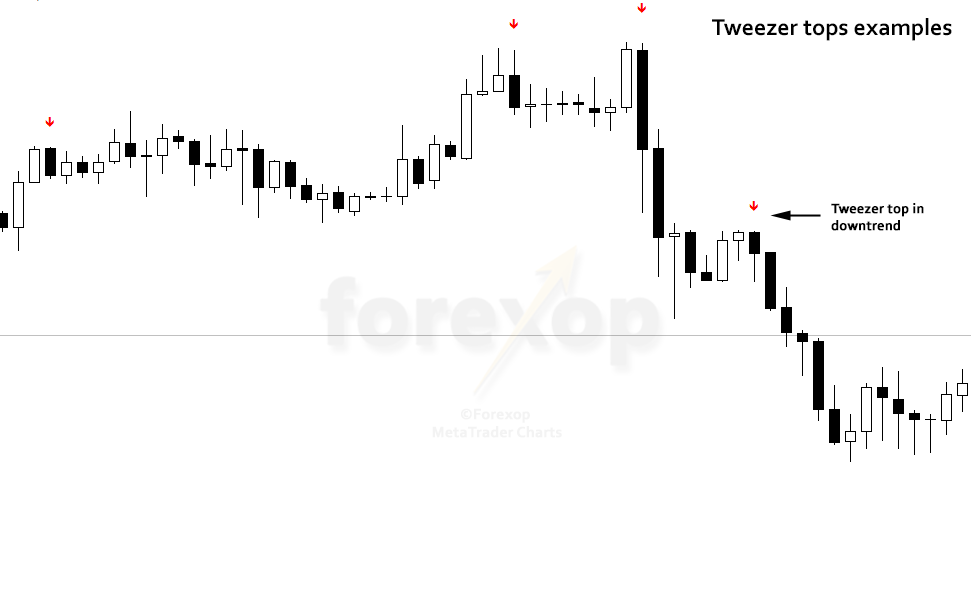 The trend culminates with a double top pattern. Both of the highs form into a characteristic tweezer. The second appears to be the stronger signal because the bearish candlestick engulfs the bullish with a strong correction. The market then falls off sharply and a second tweezer top forms in the decline as the market starts a bear rally.

Each of these formations has varying degrees of strength. Trading the tweezer pattern requires using these strength markers to gauge the market’s likely path.