Home Technical Analysis Candlesticks
The piercing line is a simple yet useful candlestick pattern to look for when trading short term up and down swings within a price channel. The pattern is traded as a bullish reversal signal, usually on the daily chart. It’s something to pay attention to if you want to enter long or close short positions.

Although these are common patterns, not all piercing lines result in the market changing direction. For that reason we also need to look to other things such as support and resistance lines and the way a trend is developing. Only then can a decision be made on whether to trade the pattern or not.

Analysis of the Piercing Line Candlestick

A piercing line is a 2-candlestick pattern formed when:

If the white candle closes cleanly above the top of the black candle, completely engulfing it, then the formation is a bullish engulfing pattern. In certain siutations an engulfing pattern provides stronger evidence that a bullish reversal is beginning, however the interpretation is important (see here). 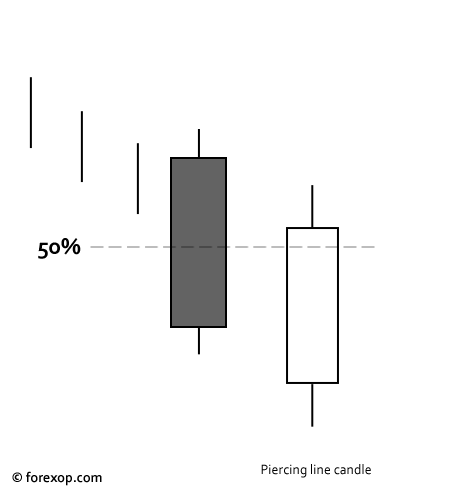 When stock traders use piercing line patterns they generally look for the white candle to open below the close of the black candle. This means that the market gapped down between the close and the open the next day.

But since forex markets are open overnight this condition doesn’t always occur on weekdays. Since there is no market close, in most cases the open of the white candle is within a few pips of the last day’s close. Gaps happen only if the market is moving rapidly at the time.

When looking at timeframes other than the daily chart we can relax this condition so that the open for the bullish candle can be at or below the bottom of the bearish candle.

Some other points to look for that increase the strength of this pattern are:

The piercing line pattern is always a bullish signal because it’s an indication that a down swing may be reversing in the near term.

A similar pattern on the bearish side is the dark cloud. This bearish formation can appear at the top of the trend or short term swing and is traded as a bearish reversal.

The piercing line is a good pattern to look for when trading short term bullish swings.  Like the bullish engulfing, it is often a sign of a short term flip in sentiment.

While the piercing line is considered more significant on a daily chart or higher, it can be useful at other time frames as well.

To be a good signal, we need to look for certain things that may hint where the strength lies; if the bears are in control or if the bulls are gaining the upper hand.

Why the size of the two candlesticks is relevant

The size of the two candles in relation to their neighbors is important and shouldn’t be overlooked.

The reason for this is that it suggests that the bulls have capitulated. Since there are fewer buyers available at that point in time this allows the price to fall further since there is less support. This increases the chances that the market will form a near term trend bottom as the drop may pull in new buyers.

A strong white candle adds evidence that the selling is over and that new buyers can enter for a short term upswing.

Looking for the channel bottom

Traders will often give the piercing line more weight if it is forming at the bottom of a price channel. The boundary of the channel can create a support area and that increases the chances of a strong reversal at least in the near term.

This support can be the lower boundary of any kind of price channel such as the bottom line of a trend, the lower line of a pitchfork pattern, the lower band of a Bollinger range and so on. 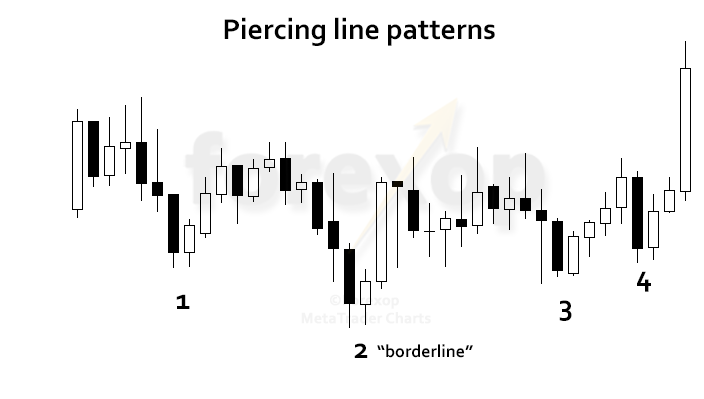 Waiting for a confirmation candlestick

Since this pattern ends with the closing of the second white candle, a confirmation can only be made once that second candle is complete.

To gain an early advantage some traders will enter the market with a buy order or close a sell position before the second candlestick has closed. This may work in some cases but it is risky because in a bear trend, what often looks like a swing to bullish sentiment can flip the other way.

For that reason it’s safer to wait for the pair to fully form even if this means a slight delay in placing the orders.

As with engulfing patterns some traders will even wait for a third confirming candlestick just to gauge the direction. The trader will then only enter after or near the end of the close of the third candlestick if it’s bullish.