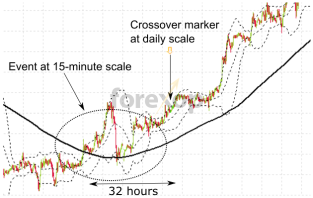 Bollinger bands are useful indicators that appear in most charting packages. First applied to stocks and commodities, they are now commonly used in Forex because they convey several useful pieces of information: trend, volatility and high/low price anomalies.

This article looks at the Bollinger indicator, what each component of the indicator means and some basic trading strategies that use it.

What are Bollinger Bands?

Bollinger bands actually comprise three separate indicators and each tells you something about the price activity at a current point in the chart. The three distinct elements of the Bollinger indicator are:

The main line is a moving average of the price. It is calculated in the same way as a conventional moving average. That is, it simply displays a smoothed version of the price and is useful for giving the broad directional trend of the market. The “period” is the averaging window. So for example, a thirty period main line averages over the previous thirty bars in the chart. A higher number means more aggregation and therefore less detail.

The upper and lower lines are useful for indicating overbought and oversold conditions. These are price extremes.

The bandwidth is useful for detecting periods of contracting or rising volatility.

An upward cross is a bullish signal whereas a downward cross is bearish. With the Bollinger indicator, additional clues are provided in the bands. Rapidly expanding bands indicate that the crossover is taking place on strong momentum (increasing volatility). Whereas the converse, with narrow or contracting bands, the move is happening on lower momentum. 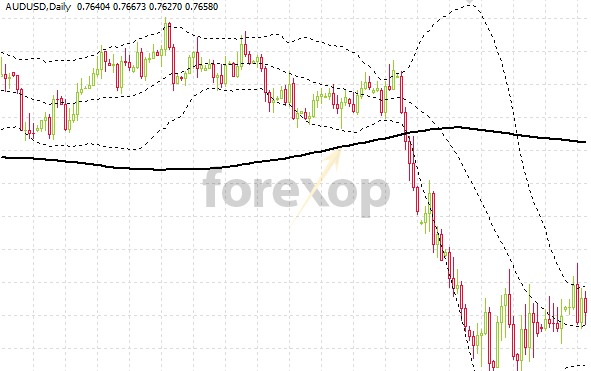 High momentum breakouts generally lead to the biggest moves, and often precipitate the start of a new trend. This is why traders are interested in them. The scale of the chart is also significant as shown in the figures.

Figure 1 (AUD/USD) shows a downside crossover which precipitates a strong new bearish trend. Figure 2 (USD/JPY) shows an upward crossover event at the daily scale. The Bollinger crosses upwards through the longer period moving average. Yet at this scale the breakout appears to be on low momentum as indicated by a narrow bandwidth. 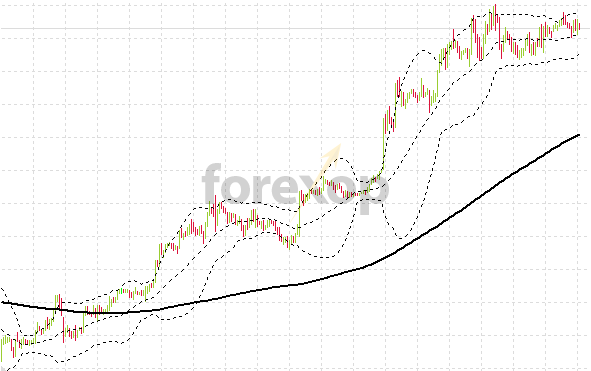 Drill down to the fifteen minute scale (M15) and the picture is a little different. The same event is shown in the ellipse in Figure 3. Note the increase in volatility at this level, and also that the break precedes the event on the daily chart by a thirty two hours. The burst in volatility takes place a couple of hours after the initial break. This activity is barely noticable on the daily chart because the movements are not significant enough to create a crossover at that level. 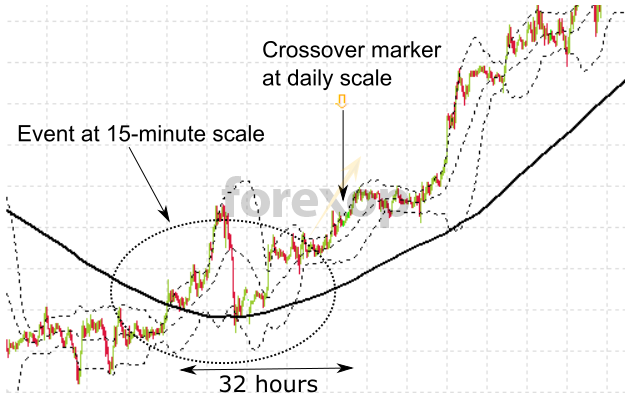 The Bollinger upper and lower bars are useful for detecting overbought and oversold states. The bands essentially mark extreme points in price. That means when the price is at a relative high or low point.

Traders will handle these events differently depending on their strategy and the timeframe they are trading. For example, a break of the upper band may indicate an overbought state in the short term. It can also indicate a bullish signal in the medium to long term.

Figure 3 above illustrates this. Looking at the activity in the ellipse again, the price breaks the upper level as it moves upwards after the crossover event. At the shorter time frame, the market becomes temporarily over extended on the upside (overbought). It then corrects downwards as some traders sell in order to capitalize on the sharp upward push. After the downward correction the price quickly resumes it’s upwards ascent. The price level briefly touches the lower Bollinger band at this point, indicating an oversold state.

A volatility breakout is when a low volatility market rapidly changes to high volatility. Typically this happens along with a strong directional price movement. These usually take place after the price has been range bound for some time and the pent up demand/supply often appears in a rapid burst of activity.

These events mark a balance between buyers and sellers when there’s a lack of directional strength on either side. They often indicate a lower volume with traders sitting on the sidelines waiting for a news release or some other information to trade on.

Those who trade these events are essentially breakout traders. They look for a squeezing of the Bollinger bands, together with other signals such as breaching of range boundaries. This is usually observed across several timeframes.

As with most trading indicators, some will trade against rather than with them. These are contrarians and their strategy is based on the premise that you can’t make money if you are following the crowd”. To the contrarian, ideal entry is the one that is counter-intuitive, rather than the trade that is obvious. Therefore the contrarian trades against signals such as crossover and breakouts of the upper or lower band.

This style is sometimes called fading because the aim is to “fade” a move before it gets fully underway and has chance to establish (thereby bringing in more volume). You need deep pockets and strong nerves for these kinds of strategies because they require positioning against the market until the correction occurs.