Home Technical Analysis
We all know that trends and price channels often don’t move in straight lines. But within the seemingly random price movements there’s still some structure.

Median lines or Andrews’ Pitchfork as it’s more widely known is a way of analyzing both ranges and trends.  It uses the idea that trends rarely move in straight lines but rather oscillate in a wave pattern around a median line or an axis.

The characteristic “pitchfork pattern” is very common in forex and in other charts. So this method has great practical application.

Unlike other trend analysis tools Andrews’ method can predict specific price targets. And in doing so gives the highs and lows that are needed for entering and exiting swing trades.

Pitchfork analysis is useful for identifying:

To draw a basic pitchfork the first step is to confirm that the price has made a distinctive three-point pitchfork pattern. The three points define the center line, the upper resistance line and the lower support line.  From there it’s possible to determine a target and use that as a signal to buy or to sell. 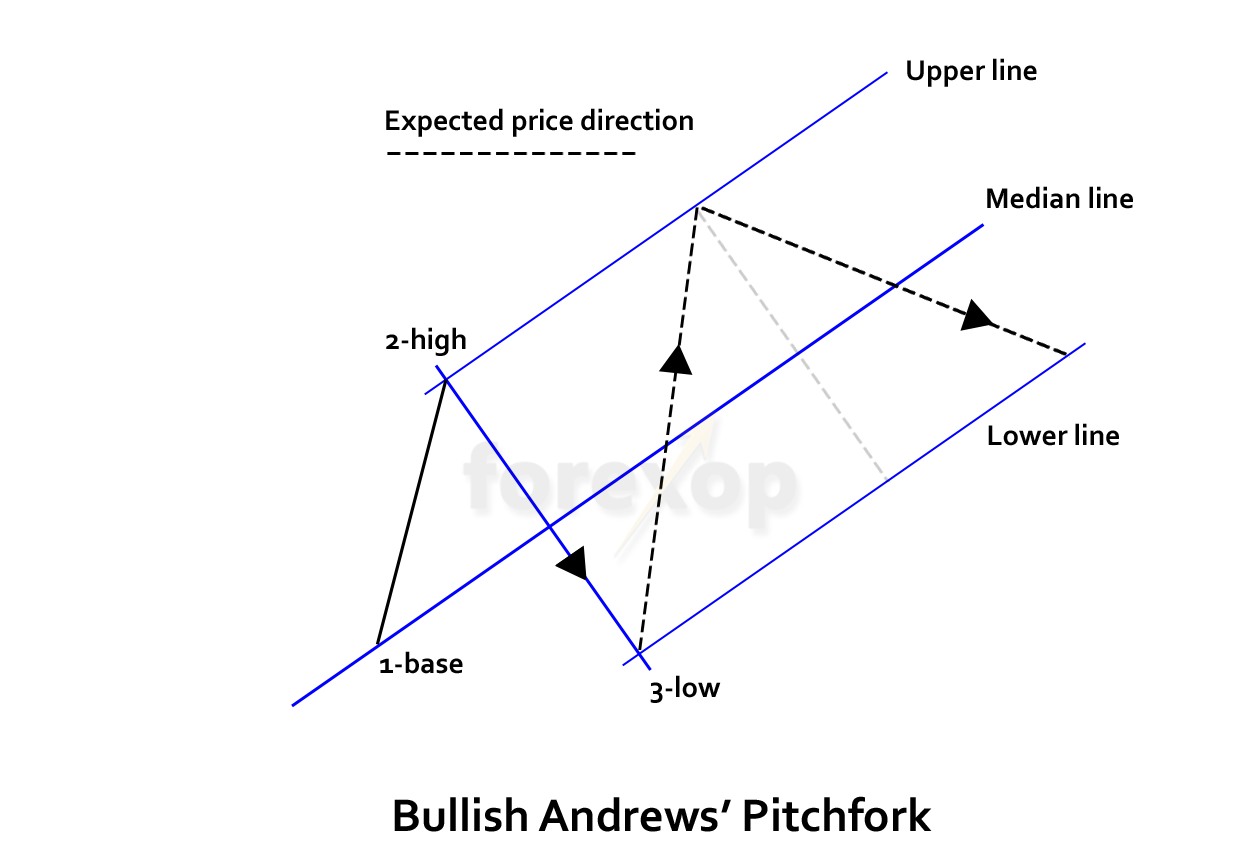 The diagram above shows how to identify a bullish or a rising pitchfork pattern. For the best outcome, it’s important to identify the pattern early on. This would be just around the time the low reversal (point 3) starts to form. The steps are as follows:

Point 2 and point 3 don’t necessarily have to be symmetrically opposite to one another. They can be offset from one another as long as they both line up on the parallels. 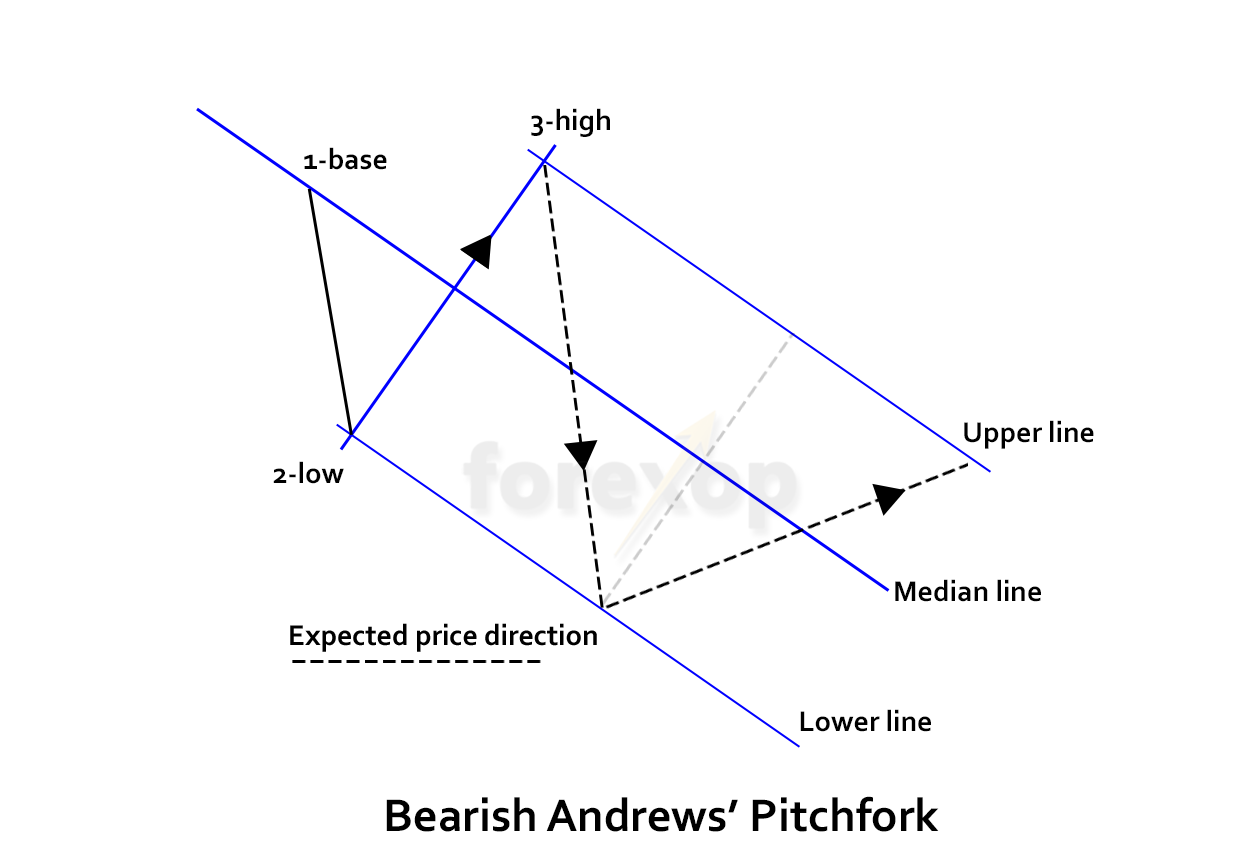 For a bearish or falling pitchfork pattern, simply apply the same method but in reverse. Again the ideal situation is to identify the pattern early on as it forms and just after the high reversal completes.

Don’t worry if points 2 and 3 aren’t symmetrically opposed to one another. It’s more important that they lay on or close to the parallels either side of the median line.

The key to trading Pitchforks successfully is in identifying them early on as the pattern is forming.

Often the pattern scatters or morphs into a new configuration after the first one or two targets are reached.

As a guide the first price target should be an equal horizontal distance between the base point and the intersection of the joining line between points 2 and 3.

It’s been suggest that the price targets have a Fibonacci wave relationship. With this they are found as the intersection of the parallel lines and a Fibonacci time series with distances 1, 1, 2, 3, 5 etc from the base point.

Bear in mind this is only a guide – the price targets should be treated as areas rather than points.  Perfectly uniform patterns are rare.

The price target can change depending on whether the price crosses the mid line or reverses at the mid line.

Price reversal at median · A reversal at the median line suggests weaker momentum and indecision. This increases the odds that the price will fall back to retest the lower support line. In this situation the new price target is on the lower line between point 3 and the second target.

The chart in Figure 3 shows an example on the EURUSD hourly chart.

Here the pitchfork shape aligns in the direction a bullish trend. The base-point followed by the high-reversal and low-reversal are fairly easy to see. Finally the reversal at point 3 completes the three point pattern and sets up the first price target.

The price target is towards the upper line in the pitchfork as shown with a dashed line.

In this example waiting for a few bars to complete shows that a reversal already starts to take place after the price touches the lower support line at point three. This adds more weight to the pattern’s existence.

The next frame shows how the price changes over the next few hours. The first target at the upper resistance line is reached. After the first target is hit, the next target is the lower support line. However the price reverses after crossing the mid line and the second target isn’t reached in a single sweep. But it does fall back to the lower support after spending some time at the top of the range.

To trade a bearish (falling) pattern we do the opposite.

Price crosses median · If the price crosses the median line, there’s a higher chance of it testing the lower support line and the first target being reached.

Price reverses at median · Meanwhile if it reverses at the median line, the chance of falling to the first target is immediately reduced. In most cases the price will rise again and stay between the upper and median line and will retest the upper resistance line again. The new price target is on the upper line between point 3 and the second target.

Andrews’ idea extends beyond a simple three prong pitchfork. He suggested there can be more than one pair of lines centered on the median line. These are the extended lines and they radiate out from the mid line at equal distances.

By zooming the chart out it’s sometimes possible to see the pitchfork as part of a larger pattern. If a section of the above EURUSD chart is zoomed out we see that the first pitchfork looks like part of a bigger and more significant structure. 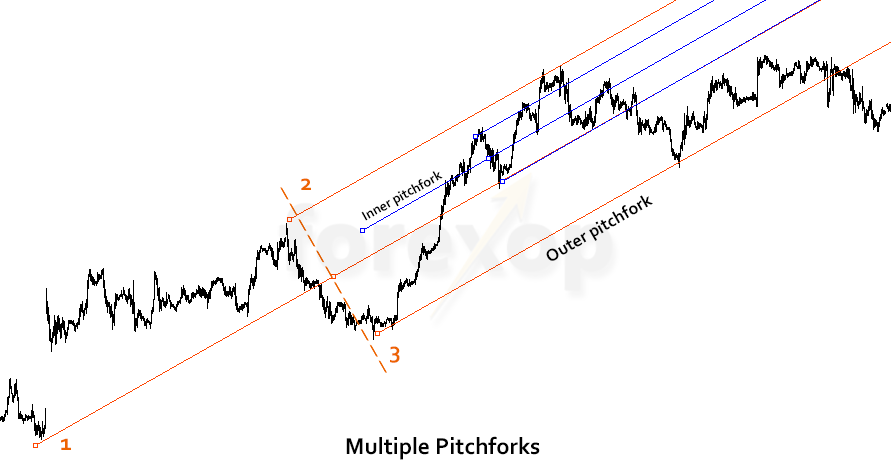 How to Use the Pitchfork in Practice

In trend analysis there’s seldom one expected outcome. There’ll often be two or three distinct paths that the market may take. The pitchfork method handles this concept well and is a good way to forecast the probable ways that a trend might develop.

Most charting packages including Metatrader include Andrews’ pitchfork as standard.