Have you wondered why do so many followers fail on Zulutrade?

Reading some of the threads on the Zulutrade forum there is one common question that keeps coming up again and again.

Can you make money using ZuluTrade?

This isn’t something just asked by newbies, and people with no investment or trading experience. It’s asked by experienced investors as well. 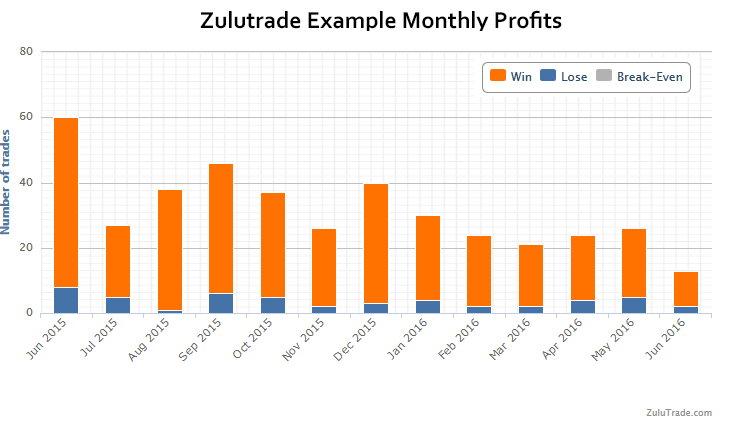 “Can you make money with Zulutrade?”

If you check out the followers’ pages on Zulutrade, it’s clear that the losers massively outnumber the winners.

While not all followers allow their profiles to be viewed publicly, a good many do.

If this group is “typical”, and there’s no reason why it shouldn’t be, by rough calculations then about 95% of investors lose some or all of their money.

If you check out the followers’ pages on Zulutrade, it’s clear that the losers massively outnumber the winners.

What struck me on looking at many follower’s performance pages was this:

There seems to be a very common pattern of losses. It goes something like this:

Of course, that holy grail of a signal provider that never loses is “fools gold”.

This is why the above cycle is repeated over again until the investor either lose all of their funds or learns to expose their account to less risk. 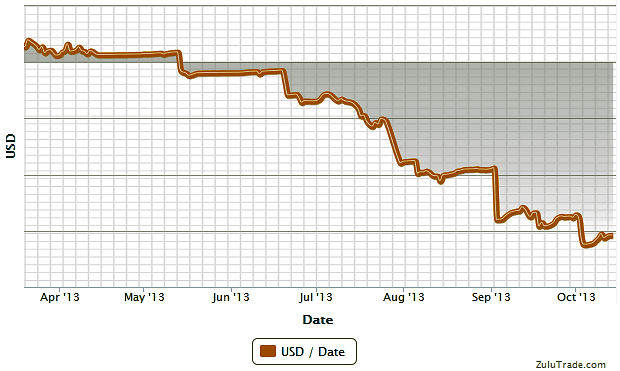 If it were, masses of people would be giving up their day jobs and sitting at home all day whilst the market earns their keep for them. That doesn’t happen.

As nearly all investors have such a predictable pattern of losses, it makes sense that profitable counter-strategies must exist that lead to gains where there are losses.

Whether you’re trading yourself or investing in others, achieving consistent, positive returns in the markets is a very tough nut to crack.

As nearly all investors have such a predictable pattern of losses, it makes sense that profitable counter-strategies must exist that lead to gains where there are losses.

In this article, we’re going to explore the common reasons for losses on Zulutrade, how to avoid them, but more importantly, how to profit from them.

1. Make Sure You Can Withstand the Drawdown

Here’s something we can both agree on:

The number one reason why investors lose out and SPs don’t is that investors tend to over-leverage. This forces them to “abandon ship” during big drawdowns.

Often this is at the worst possible point.

Capitulation in the market – just before a major trend reversal takes place.

A good rule of thumb is to add-up the worst drawdowns of all of your signals providers, then multiply this number by two.

This will give you your very worst-case scenario.

You should be able to suffer that loss on your account and still continue with your investment plan – without a margin call, and without significant difficulties.

In the currency markets, worst-case scenarios tend to happen much more frequently than people realize.

As if that’s not enough, many signal providers are using similar Expert Advisors and using similar trading styles. If you’re following a group of providers, you could be far more exposed than you think!

Make sure you understand the correlations between currency pairs.

EURUSD and GBPUSD have a strong positive correlation, while AUDUSD and USDCAD tend to be negatively correlated.

If your traders are primarily using the same strategy, but on a correlated pair, you are in effect doubling-up on your exposure.

Many signal providers are using similar Expert Advisors and using similar trading styles. If you’re following a group of providers, you could be far more exposed than you think!

Use this free Metatrader tool to check correlations between the instruments being traded and whether or not they are properly diversified. If they are not diversified, use your trade settings to reduce exposure accordingly or avoid the signal provider altogether.

Grid trading is a strategy that’s loved by many signal providers on Zulutrade.

It can yield tremendous profits under the right market conditions. Boosting their rankings as well as generating a huge commission for them.

Here are some examples of grid traders on Zulutrade:

As expected, not all of these are still trading.

When grid trading is done correctly it should actually reduce risk.

But oftentimes the technique is used to multiply exposure thus generating profit from unnecessary turnover.

This kind of grid trading is extremely risky. Especially for the smaller investor, who isn’t able to tolerate frequent and deep drawdowns. 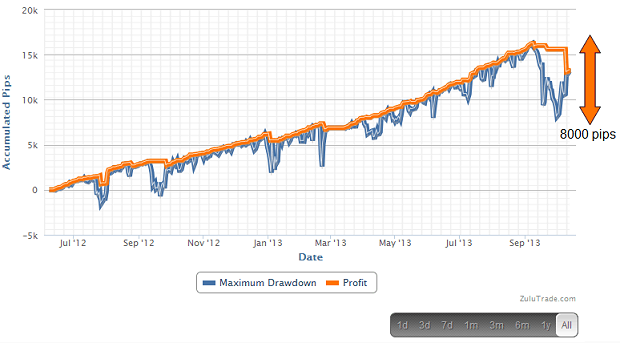 When you’re following a trader with this kind of strategy, their decisions can seem reckless and make no sense.

Especially when the market is trending strongly against their positions.

And you know what?

You need strong nerve and deep pockets to follow this type of signal.

There are a few reasons why caution is needed when following this type of trader:

If so many people lose money on Zulutrade, then why not do the exact opposite of what they do?

In effect, you become their counterparty.

Zulutrade has the tools for you to do this very easily. 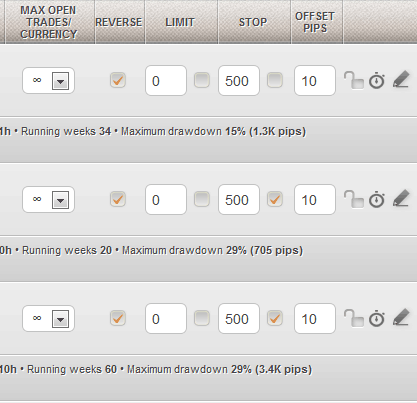 The “reverse” switch is available in the advanced settings screen.

A reversal-strategy is not appropriate for all signal providers.

If you find yourself too emotionally attached to the swings and movements in the markets, you’re probably investing way beyond your financial means.

But these are interspersed with deep and devastating drawdowns because their high win-ratio is unsustainable in the long-run.

This is the so-called Taleb or fat tail problem.

See this real simulation (opens in a new window).

In fact, by connecting to many such SPs at once, followers are inadvertently fast-forwarding the result of this simulation.

Keep in mind that when investing real money, powerful psychological factors come in to play.

Especially if you’re investing funds that could impact your lifestyle.

If you find yourself too emotionally attached to the swings and movements in the markets, you’re probably investing way beyond your financial means.

Be aware that those traders at the top of the rankings may have gotten there by a combination of luck and temporary market conditions. Conditions that simply favor their particular style at that point in time. 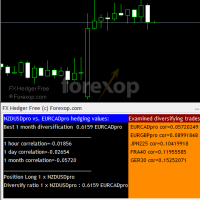 A Metatrader indicator to help you set up a hedging strategy or to better diversify your trades. The indicator will find relationships between any instruments.

Unfortunately, once they reach the top of the rankings, this is the point that most investors blindly “pile into” their strategies.

Inevitably, the conditions that got them there in the first place change, and their returns suffer as a consequence.

Once a trader achieves high rankings and attracts a significant pool of followers, many of them stick.
Even during the bad spells.

If you look at the providers who’ve reached the top like F8, Increasing Deposit, Azar Consulting or Kama Spot they still have significant funds following them, despite falling sharply down the ranks.

The provider has little incentive to improve performance.

Beware of “churn and burn” traders Zulutrade’s policy of letting signal providers run on demo accounts is definitely a mixed blessing in my view.

One major disadvantage is that it lets unscrupulous ones use a trick known as “churn and burn”.
Think about this a moment.

What the “churn and burn” trader does is create a huge number of demo accounts with 3rd party brokers, sometimes hundreds of them.

He or she then runs various expert advisors with slightly different parameters on each account. He then monitors the returns over a few weeks.

By the law of averages, one or two accounts will perform quite well over this period.

Just because, by some fluke, they are suited to the prevailing market.

This is not the result of the trader’s skill or the quality of the EA. The other accounts will most probably suffer massive losses.

These “winning” accounts may be profitable for a few weeks before crashing once the prevailing market conditions changes.

At this point you realize:

This is a scam.

It’s impossible to see who’s doing this, yet its widely accepted in trader circles that it’s going on.
Things to watch out for are signal providers having high numbers of “alternative” – or “known as” accounts.

When it comes to currencies, understanding diversification is not an easy matter.

Many signals on Zulutrade are correlated beneath the surface at a fundamental level.

This makes them perform in a similar way.

Here are some examples of how indirect correlation exists:

You often see investors on Zulutrade following dozens of signals a the same time.
This can be a costly mistake.

When you follow SPs who’re correlated for the above reasons, rather than diversifying you are actually adding to your exposure and so increasing risk.

This way you reduce your overall trade volume and costs. Many investors overlook this fact.

When you follow large numbers of providers with small lots, the slippage and spread costs can massively cut into profits.

This is worse if the provider’s “average return per trade” is very low.

In this case, your total costs, as a percentage of profit are much higher.