Home Technical Analysis Candlesticks
When trading an uptrend we always want to be alert to changes in bullish sentiment even on a small scale. The dark cloud is one such pattern that we can look for as an early sign of a bearish reversal. 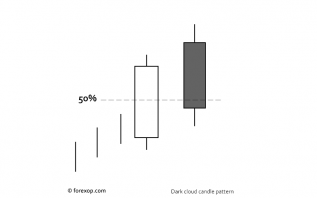 In the daily chart the dark cloud pattern isn’t necessarily a signal of long term change in trend direction. Instead it’s a signal of the possible end of an upcycle and that perhaps some retracement is building.

Knowing this pattern is helpful when you want to close long positions or of course if you want to enter the market short. For traders buying for the long term it can be a good opportunity to buy at a lower price.

How to Identify a Dark Cloud Pattern

The dark cloud is a simple pattern of two candlesticks. Sometimes called dark cloud cover its name comes from the high, dark-colored candles that start to appear high up in a trend. It’s the first sign of trouble to come.

In the pattern itself, the first candle is bullish and this is followed by a bearish candle that descends at least by half of the depth of the bullish candle.

The dark cloud is the bearish opposite to the piercing line which is a bullish reversal signal.

If the bearish candle is longer than the white bullish candle, the pattern is a bearish engulfing and that’s seen as being slightly more negative than the dark cloud.

The higher open of the following day suggests that the market gapped higher at the open but that momentum quickly reversed and the day turned bearish.

In markets that trade 24 hours we relax this condition because the open and close are usually at the same price or very close except for weekends when the market closes.

What does the pattern mean?

On its own the pattern may not mean very much. But when taken together with other pointers on the chart, the dark cloud can help us to understand if sentiment is changing to become more negative. Buyers are pulling out and selling is taking hold.

On a daily chart, the pattern shows that the bears have taken back at least 50% of the gains of the previous day. That can be quite significant especially if the white candle is long and touching a new recent high. The sudden change is a key feature.

Although upward momentum is starting to drop,  that doesn’t necessarily mean there’s a fundamental change in trend. It can mean that the number of buyers is temporarily dropping while sellers are rising. Those buyers who came in early into the trend are looking to take profits and are now sellers.

This is a classic pullback/retracement wave where the market naturally starts to give back some of its gains.

What adds strength to the pattern?

Not all of the appearances of dark clouds are strong sell signals so it’s crucial to look carefully at the chart to detect signs as to whether bearish strength is building or if this is just a blip.  This will give you a good idea if it’s a strong enough case on which to trade.

Some things to look for include:

Markets are never predictable and as such they rarely move in the same direction for long.

The dark cloud can start to appear in any uptrend – identifying it early is the ideal case so that you can plan a course of action. 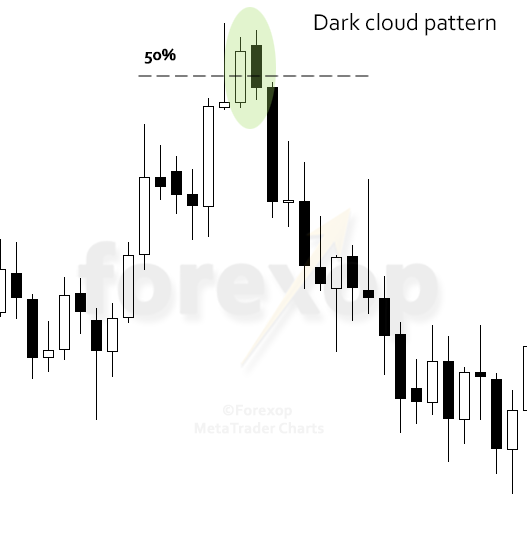 As with the piercing line pattern, some traders will not enter short on the close of the bearish day but will wait a second day to see if sentiment remains bearish.