Home Technical Analysis
Renko charts are an alternative to candle and line charts. They summarize price movements as simple patterns which can be effective at locating trends, reversals, supports and resistances.

This means you can develop trading strategies based entirely on renko price signals instead of line-chart price signals. 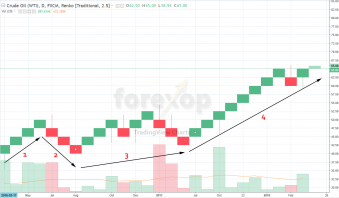 In this article we’ll show how renko charts, and in particular the ATR system, have some advantages over regular chart analysis.

For an introduction to renko charts, see this article.

The first thing that distinguishes the renko trend from a trend in a line or candle chart is that the slope of any continuous trend is always the same: 45 degrees.

The slope does not represent trend strength or speed, it just means the price is rising or falling.

When analyzing a renko chart, we need to ignore the time axis, at least for simple examination. As each block represents a fixed amount of price movement, when the price rises or falls quickly, this produces a faster creation of blocks.

While this makes the notion of the trend a little unusual, it also means that trends stand out where otherwise they would be hidden by market noise. 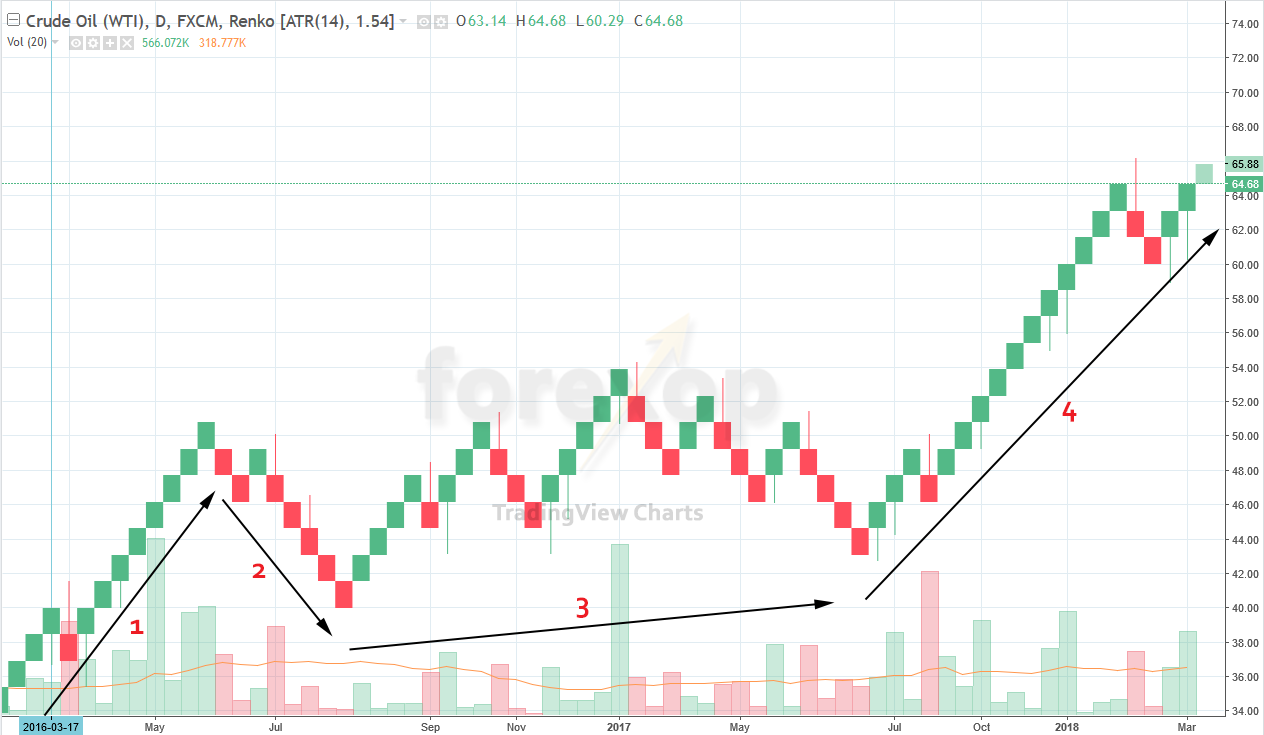 The chart displays up and down diagonal patterns that are characteristic of renko charts.

The arrows mark a bullish trend and there are a couple of correcting wave patterns within this main trend. 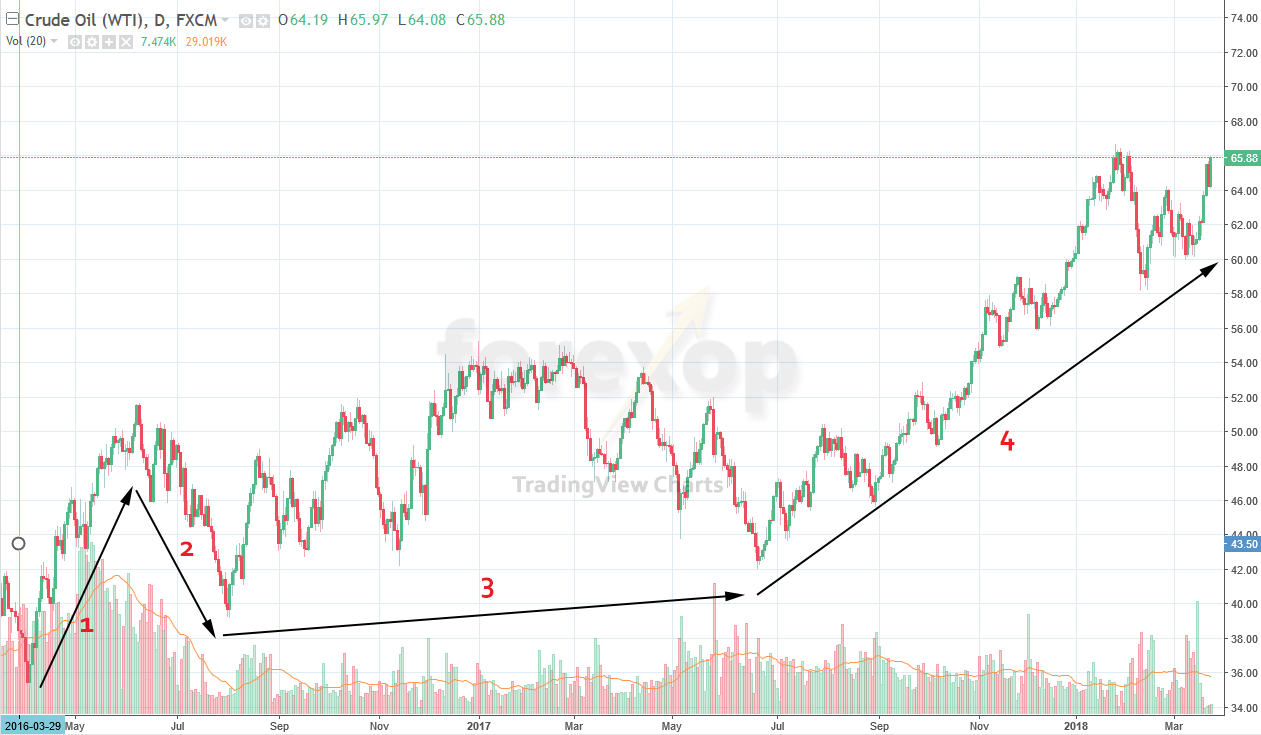 Since we know that each block measures a fixed unit of volatility (or price change), for a red, bearish block to appear it means the market has fallen by a set number of standard deviations.

In this way, using a renko chart to find reversals is not unlike the crossing of the lower Bollinger band.

When the candle chart in Figure 2 is compared alongside the renko chart, we see it has more turning points because every single price movement is record in the chart.

By contrast the renko chart only shows movements that are significant with respect to the current volatility. This makes the identification of trend reversals and breakouts less subjective.

As well as locating trade entries, the blocks can be useful as well to define the exits; the stop loss and take profits.

There are two accepted ways of setting the block size in a renko chart. One is fixed block sizing. And the other is the ATR (average true range). Most chart software lets you choose between these two methods.

With ATR the renko block size is variable and changes along the time axis. It’s set from one period to the next from the average true range formula. 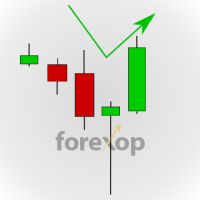 Traditional renko charts use fixed block sizing that can either be a percentage or a fixed unit of price.

With this, if the block size is set to 1%, for example then a trend that raises the market by 10% will be made up of at least ten “bullish” blocks in the chart. Smaller price changes won’t appear on the chart until the 1% threshold-change is reached.

One advantage of using variable block sizing is that the chart will automatically scale itself. This happens regardless of the time period or amount of volatility.

A fixed block size of 1% might be suitable on a daily chart. But it would be unsuited to a 30 minute chart because the resolution would most probably be too low.

The other advantage of the ATR block sizing is that patterns in the chart like reversal points will be determined by the volatility, not absolute price changes. This is important for trend following and other strategies.

When deciding on a trading strategy one of the first things to look at is block sizing.

The block sizing in renko charting can be thought of as a type of averaging. With a bigger block size, the chart will display less detail but it will be less prone to false trend reversals.

The chart in Figure 3 shows US crude oil, again, covering the same period. The block size here is $2.5. What this means then is that each block marks a $2.5 movement of the crude oil price from the last block.

With a smaller block size, more details in the chart are revealed. When the block size is set very small, the renko chart will resemble a standard line chart.

The chart in Figure 3 averages out more price movements than that shown in Figure 1. Just like a moving average, this exposes only the major turning points.

As well as trend reversals, renko charts can help us to see where the price is making new highs or new lows.

This makes it easier to find lines of support and resistance, and channels especially with automated trading systems.

Once the supports and resistances are located, then other patterns like price channels become clear. From these we look for trading setups like breakouts or in-range trades. 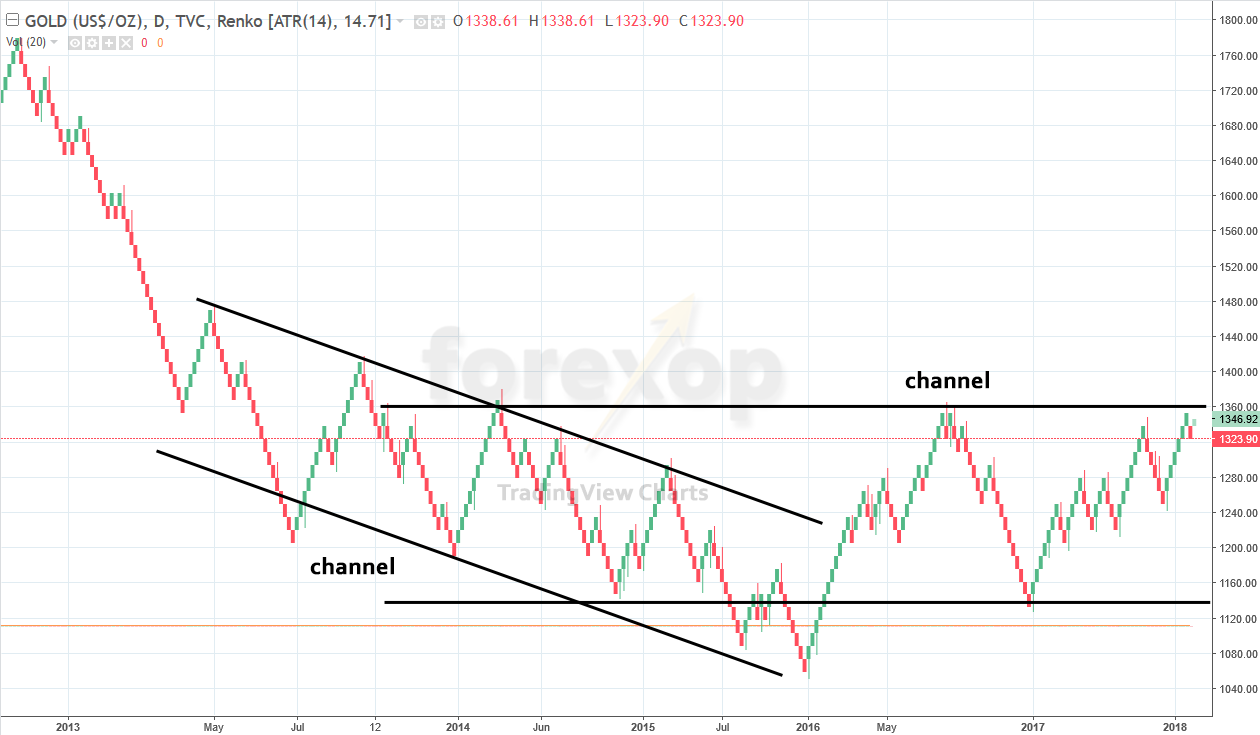 The chart in Figure 4 shows gold versus the US dollar. The two main price channels are easily found as are the lines of support and resistance.