Home Technical Analysis
A broadening wedge is a range where the price is holding between two trend lines that are moving apart. The pattern is also named a “megaphone” because of its shape.

These chart patterns are similar to triangles, wedges, flags and pennants.

Broadening wedges can be either bullish or bearish depending on how they form within an existing trend. There are some clues in the pattern itself that suggest whether the market is likely to continue the same trend or reverse. 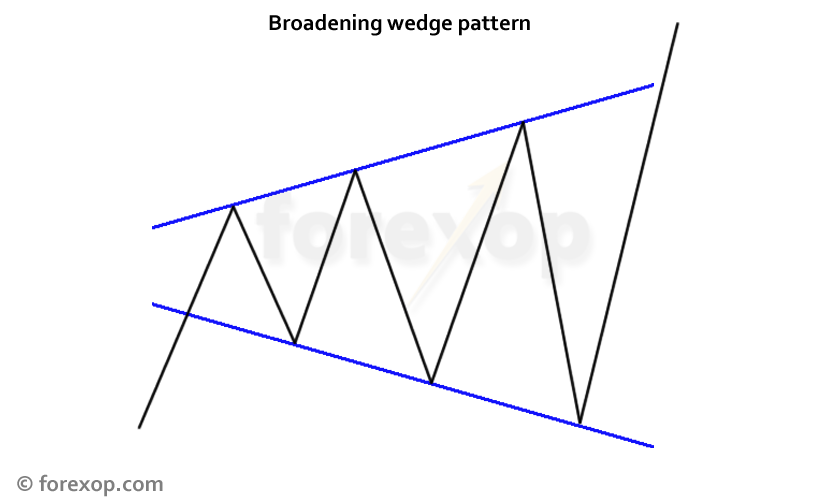 You can trade these chart patterns as range trades between the highs and lows of the support/resistance lines. They can of course also be traded as breakouts.

How to Spot a Broadening Wedge – “Megaphone” Pattern

A broadening wedge forms when the price is holding between two diverging trend lines. The upper line is resistance and the lower line is support.

When the broadening wedge is aligned horizontally, the price makes higher highs at the top and lower lows at the bottom. See Figure 1.

Like other wedge patterns, the broadening wedge can be aligned towards the main trend or against it.

Interpretation of the Pattern

The trading rule for broadening wedges depends on the context. The breakout direction when the pattern ends is usually against the direction the wedge is forming but the odds are close (see table below) .

The table above shows the percentage of broadening wedges that resulted in either a downward or upwards correction. This data covers a 10-year period of five forex pairs at five different timeframes, up to the daily chart.

When the pattern is oriented against the trend the price tends to breakout in the same direction as the original trend. These are continuation patterns and are usually quite small relative to the overall trend. These cases are quite similar to pennants, wedge, flags, and triangles.

To identify a broadening wedge continuation we use the following rule:

See the chart below for an example.

When the broadening wedge is big and contains most of the trend it’s forming in, it can indicate the market is heading for a reversal.

The broadening wedge can be useful for either range trades or breakouts.

With range trades, the pattern defines a price channel. You can then trade the price as it moves from the lower support to the upper resistance or vice versa.

If you’re trading the lower timeframes, the pattern is useful as a guide for trade entry and exit.

For example if the broadening wedge is forming over a few weeks, this gives plenty of opportunity for swing trades between the highs and lows in which the pattern is developing. 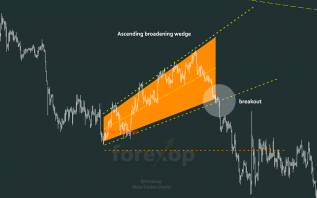 The example in Figure 2 shows an ascending broadening wedge on chart GBPUSD H4 and shows the characteristic megaphone shape. We’re using a wedge indicator here to locate the patterns.

This case hints at a bearish continuation of the trend. The wedge is aligned away from the trend, and it’s small with respect to the trend. It’s also “top heavy” in that the price is mostly in the top half.

The price finally breaks to the downside. This is shown in the shaded circle. Notice that the breakout is sudden once the price breaks below the lower support line of the wedge.

When trading wedges, the size of the pattern itself provides the best guide to the placement of stop losses and profit targets.

In the example shown in Figure 2, the lowest point of the pattern is the target level for the breakout. This is shown by the horizontal orange line.

The price easily crosses this line and the breakout moves further down before retracing some of the fall.

When following a breakout such as this, the stop loss can be placed between the lower support and the mid line of the pattern. Short positions are closed if the price moves up above these levels.

The reverse holds true in the case of a descending broadening wedge.