Home News
Yesterday, we received the news that the Republican candidate, Donald Trump, will be the next President of the United States, with 279 votes, against 228 for the Democratic candidate, Hillary Clinton. 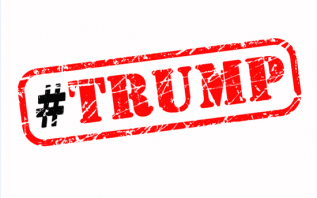 What Next for America? © forexop

Stock markets reacted strongly to this surprise announcement as they had long bet on a Hillary victory.

When Trump started pulling ahead in the polls, investors started panicking and indices headed lower, though they recovered well and finished in the green.

The Mexican peso (MXN) fell by over 12% against the US dollar at one point but later recovered some ground. The US dollar also recovered early losses and is now trading higher against a basket of major currencies.

Victory Trump: What are the economic consequences?

While the Democratic candidate wanted to cut taxes for the lowest income households and increase those for the wealthiest Americans, Donald Trump wants to reduce taxation of high and middle income earners (39% to 33%) and change the number of tax brackets from 7 to 3.

Regarding the level of taxation of US companies, Trump wants to lower it from 35% to 15% – the richest 1% of the population will see their taxes fall by 47%, according to the Tax Policy Center.

Trump is also planning to eliminate tax loopholes and create a tax on corporate profits earned abroad. Over 10 years, companies should save nearly 3000 billion dollars. It has been suggested that Trump will remove the inheritance tax and reduce taxes on capital gains.

Trump also wants to introduce policy to encourage companies to repatriate wealth held overseas. This could generate a major boost for the US economy.

As we said in a previous article: Markets Face a Bumpy Road Ahead: US Presidential Election: “Donald Trump is actively opposed to free trade and will continue to work for the abrogation of trade agreements and the introduction of new tariffs and trade restrictions. He promised to implement a clearly protectionist policy.”

New tariffs will be especially tough on Chinese products (45%) and Mexican products (35%). He also wants to implement trade restrictions. He is opposed to the ratification of the TPP or Trans-Pacific Partnership, he has doubts about the presence of the United States in the WTO and wants to renegotiate the NAFTA agreement.

Donald Trump has strongly criticized the FED, its approach and its methods. One might therefore think that he may replace Chairman Yellen in 2018. The probability of a rate hike in December went down sharply after the election results: from around 84% before to less than 50% after.

If Trump sets up his rather protectionist economic program, this could lead to higher inflation, which could thus accelerate towards the 2% FED target, and force the FED to act if inflation accelerates too quickly.

Trump has promised a massive program for rebuilding roads, bridges and hospitals. Some forecasts show this will increase public debt dramatically to around 130% of GDP within 10 years. Conversely the economy could expand significantly as a result of his other proposals thus making the debt ratio much lower than current projections.

Markets did not seem to panic as they did following the Brexit vote, probably because many investors had covered their positions. After the Asian, European and US indices fell (-500 points on the DAX, -800 points on the DOW JONES …), investors retained their composure and calm.

The US dollar fell sharply against the Japanese yen (USDJPY), the euro (EURUSD) and the Swiss franc (USDCHF) on the news. But early losses were erased as investors determined that Trump’s tax cuts and other stimulus measures could accelerate the US economy in the medium to long term.

Trump’s acceptance speech also went a long way to reassuring markets. He was far more conciliatory than expected. He reached out to opponents striking a more moderate tone.

As we have seen, it was not reasonable to base your asset allocation on polls that gave a victory of the Democratic candidate, and you should definitely not immediately start building your allocation based on the election promises of the future President of the United States.