The accompanying post gives an introduction to triangular chart patterns. To try this method out you can download our free Metatrader triangle indicator which finds and labels triangle and wedge patterns on the chart.

Chartists will classify a standard ascending triangle as one having a horizontal or nearly horizontal top edge. If the top line deviates much from the horizontal, chartists will refer to these as wedge patterns; either a falling wedge or rising wedge depending on the orientation. 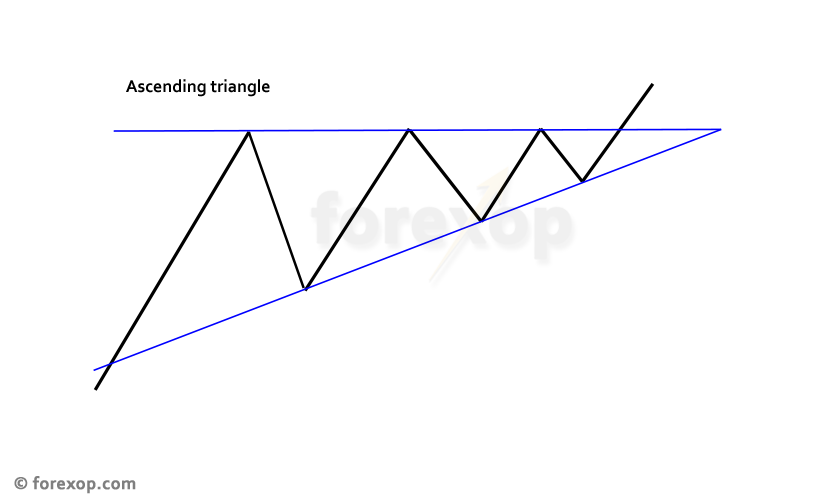 A horizontal ascending triangle is classically a bullish signal. On longer period charts the rising wedge is typically seen as a bearish formation – it’s the exhaustion phase of an uptrend as volume and momentum dwindles. However on the lower time frame forex charts the development is often bullish.

When looking for bullish triangular patterns, the main visual cue is that they form in places where volatility is contracting. Often you won’t see the price forming exactly in a triangular shape, but it should be reasonably close.

To be valid, the price must “saw tooth” across both sides of the pattern and not remain on one half. The teeth should also get progressively smaller and higher.

In practice there’s always a good deal of subjectivity and interpretation in outlining the exact form of the triangle pattern – especially on shorter timeframes. So I don’t tend to worry too much about the classifications but prefer to focus on the overall appearance and surrounding.

As I’ve mentioned before the two main factors I use for triangle patterns are the depth and orientation. Together with the trend this will give a good indication of the market’s overall sentiment.

You’ll probably see the ascending triangle in two different forms. The first one is when it precedes a strong bullish breakout. An example of this is shown in Figure 2. This is a common pattern often seen in uptrends. It’s an area of price consolidation and contracting volatility.

The breakout takes place when volatility suddenly rises after the pattern completes.

The second form is a regular continuation pattern. This is where an ascending or sometimes symmetric triangle opens up. The difference though is that trend resumes after the pattern without any major breakout.  Figure 3 is an example of this case.

Triangle chart patterns tend to appear in bunches throughout a trend. You’ll frequently see groups of patterns throughout: From trend start, to middle, and then to reversal.

When trading, anticipate a breakout shortly after the triangle completes. This is the time that volatility is squeezed the most and the market is poised for a new burst of activity. This happens in other kinds of breakouts as well as triangles.

Many chartists recommend entering the market only when the price decisively breaks above the top horizontal edge. The triangle’s top edge is a resistance line. The breakout has to happen at or near the triangle’s tip. With this approach a buy order is placed only if a candle breaks above this line.

When the price does break, the line extended from the top edge then becomes a support. See Figure 4. 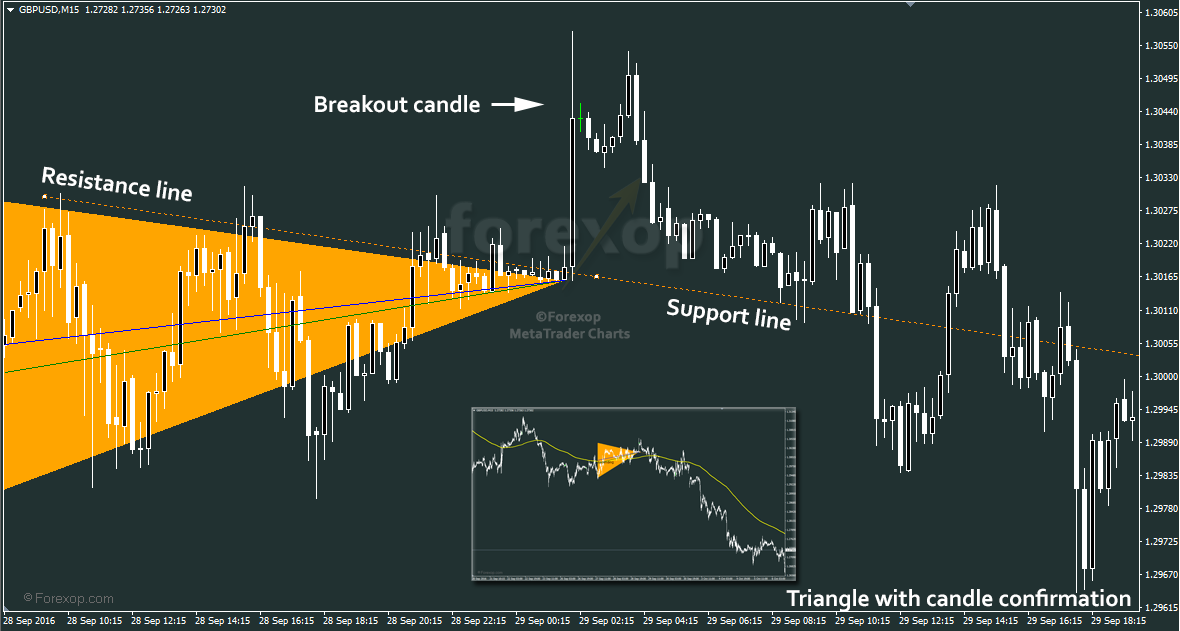 To put this to the test we can look historically at four currency pairs USD/JPY, EUR/USD, GBP/USD, and USD/CAD over the past ten years. This shows the breaking candle method objectively performs slightly worse than no check at all.

On the fifteen minute chart, the success rate was 51.2% using the confirming candle method. However it was higher at 51.6% without using the first confirming candle. I measured success as the market’s breakout direction (up or down) in the time just after the pattern completed.

On possible cause is that using a breakout candle can depend much on the interpretation. If it’s a symbolic candle, such as a strong bullish engulfing pattern it can be a useful signal. Otherwise it’s questionable.

On shorter time frames, one or two candles alone can be unpredictable. This is especially so in a volatile forex breakout where the market will often whipsaw erratically.

If you’re a skilled candle trader this method can work. Otherwise the moving average line may be a more reliable guide.

To confirm this we can do the same test as described above but with the direction of the moving average line as a trigger. Using this method led to a success rate of 52.6% against 51.2% for the candle method.

Using constraints like the trend will obviously create fewer trade entries. However they should be better quality and more likely to pay off as profitable trades. This will give a higher expectancy over the long term.

For manual trading it is possible to check the orientation of the moving average line with a simple slope calculation.

For a bullish breakout, I then only place the order if the slope is above a positive threshold.

Using a longer period moving average is best; at least longer than the maximum width of the triangles.

When setting the trade a standard rule of thumb is to use the pattern itself as your guide. The depth and orientation of the triangle will tell you the state the market is in. The table below provides a basic guide for the bullish trade setup.

It’s also a good idea to look at other constraints as well like supports and resistances. The top edge, bottom edge and middle line of a triangle pattern usually form very good local support and resistance. Use these as a guide to the market’s likely future direction. 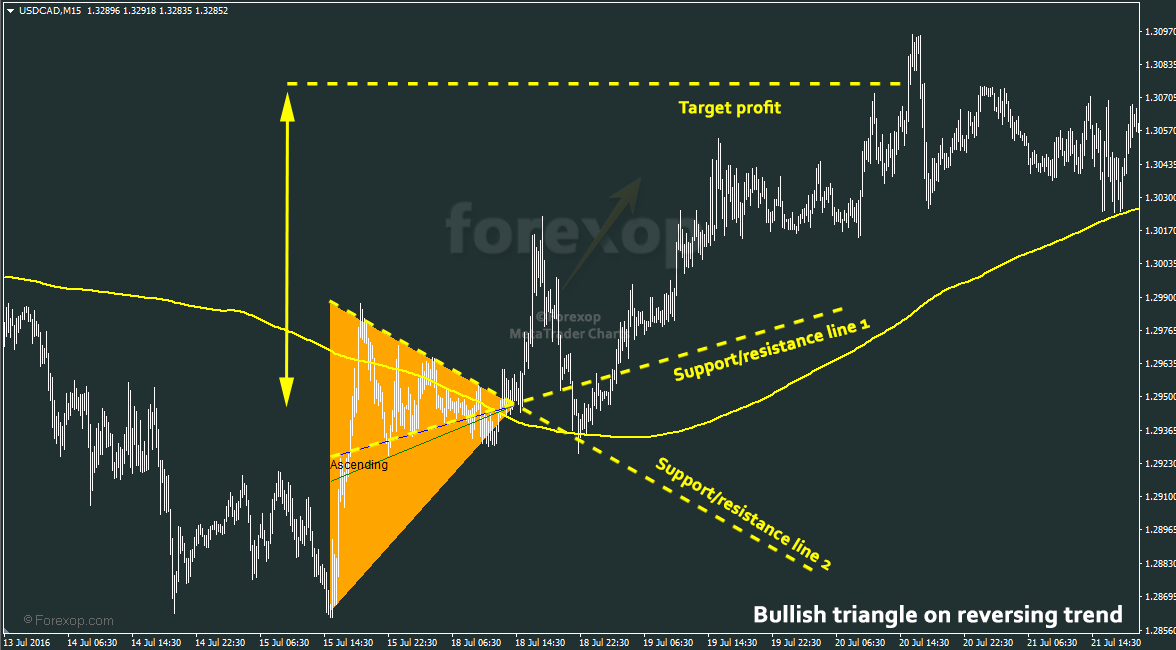 You can use these support levels as a  trailing stop. To do this the profit target and the stop should be progressively raised as the trend lifts higher. In Figure 5 for example this would be done along line 1.

If the price descends well below the triangle’s base support levels, then the trade is closed. This would be line 2 in Figure 5. It’s best to add some margin below these lines otherwise it will result in a lot of stopped out trades due to whipsaw.

As a bullish breakout forms expect to see some drawdown as the market tests the strength on both sides. There’s rarely uniform upward break after the pattern though this can happen sometimes and obviously this is the ideal.

Read more on the triangle indicator.