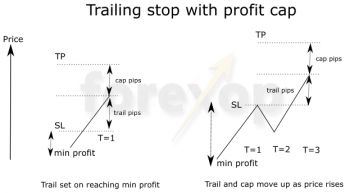 Trailing stops how and when to use them © forexop

Trailing stop losses can give you a way to limit losses and to lock in profits on your trades. A trailing stop works so that as a trade moves into profit, the stop level adjusts to lock in the profit and limit the loss potential.

In this way the downside is limited by the stop level but the upside is potentially unlimited. Put another way, trailing stops are a way to allow your profitable trades to run and losses to be limited.

In this article I describe how trailing stops work. I also test evidence that trailing stops lower risk and result in higher profits. This is done by running back tests on two basic strategies both with and without trailing stops.

Trailing Stops – How they Work

There are several variations of the trailing stop used by forex traders. Some of these are offered as standard on trading platforms, others need to be custom-coded with software.

The most common trailing stop systems are described here.

With the standard trailing stop the trader sets an activation profit threshold. Once the threshold is reached the trailing stop “kicks in”. The system places a stop loss just below (or above for a short) the current market price.

The reverse is true for a sell-side position. The trailing stop will stay fixed if the price moves against the trade. The exit happens once the stop level is hit.

The diagram above illustrates a standard trailing stop system.

With this type of trailing stop the trader will need to set a trail distance. The trail is the “distance” between the current market price and trailing stop exit point. So for example with a trail of 10 pips the trailing stop will float 10-pips below the market’s highest price since “kick-in”.

With some trading systems the trail point is allowed to move either dynamically or in fixed increments (step sizes either in time or price).

Dynamic trailing stops have a high overhead on your trading software and on your broker who has to processes the rapid order throughput.

With an incremental trailing stop the level is only changed once the price changes by more than the pre-set step size. With a time-based increment the level is changed only once per interval.

With a standard trailing stop the take profit level is usually left unset or at least set very wide so that the profits can run. This way the trade will usually exit when the stop loss is hit rather than when the take profit is hit.

For this reason some traders prefer to use a variation on this known as the capped trailing stop. With the “capped stop” the take profit level is also set dynamically.

The cap is placed a small distance above (below for sell orders) the market price. The cap is held fixed for a certain period of time or price interval. If the cap or stop isn’t reached in that time interval the trade remains open.

Clearly both the cap and stop can’t be adjusted on every tick otherwise neither would ever be reached. 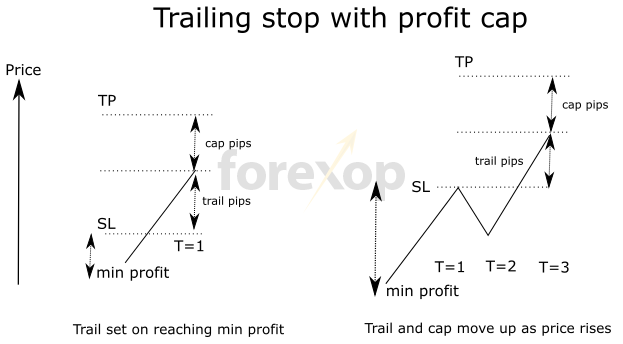 The benefit of this approach is that it can result in higher profits.

The reason being that there’s a probability greater than zero that the take profit level will be reached. Remember that without the cap the trade will nearly always exit only through the stop loss which is set “beneath” the triggering price level.

In this case the stop will be triggered at or below your current profit level. Trailing stops work best when the market is moving in the direction of profit. For this reason sometimes it’s better to use what’s called a conditional trailing stop.

With this method the trailing stop only triggers when a certain condition is met. Otherwise the standard stop and take profit is kept. The “condition” is usually based on the market direction.

Momentum based conditions are the most common. With these, the trailing stop activates at a point in time when both the minimum profit level is reached and when the market is moving in the direction of profit.

A basic condition for example can be on price change over a certain number of bars. For example, if the price moves more than +10 pips over 2 bars, the trailing stop activates. 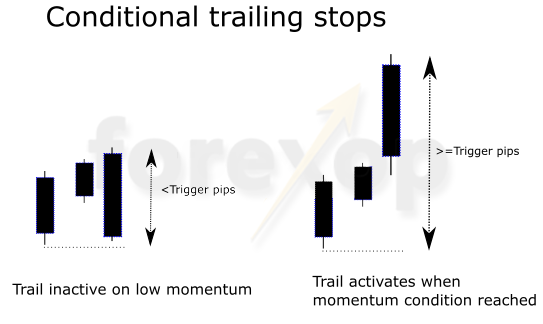 The reason this is used is that when the momentum is in the direction of the trade it’s more likely that the stop level will have a chance to move upwards within the next few bars.

But if the momentum is moving against the trade, there’s a higher chance that the trailing stop will be hit quickly before having a chance to move upwards (downwards) and reach a better profit.

In this case taking the profit immediately is usually the best course rather than applying the trailing stop.

Client side vs broker side stops

One thing to be aware of when using trailing stops is the difference between broker side and client side stops. With a broker-side system the trailing stops are managed as part of the trade order. Once the order is placed and the trailing stop is set, the broker’s trading software will monitor the trade and set the stop accordingly as the market moves.

Client-side trailing stops are executed by the trader’s software. Metatrader for example has a basic trailing stop function as do other trading systems.

Client side stops will only work while the client terminal is open whereas broker side stops are set for the lifetime of the trade. This means when using client-side stops you’ll need to keep your trading terminal open for them to work.

We back tested the trailing stop systems on two “vanilla” strategies. The first was a trend follower, and the second a breakout system. The tests were run over two durations namely short term (12 months) and long term (10 years).

The maximum leverage used was 1:1 ($100k start balance) and the spread was set to 2.1 pips. We tested each on a single currency pair at a time (GBP/USD and EUR/USD) and used four variations:

Adding both the cap and the condition gave better returns than using a regular trailing stop alone. This came at the expense of slightly higher drawdown.

However over time this benefit was negated by a lower per trade (average) profit. This is because a trailing stop system has to “give up” a portion of profit in return for a limited loss.

We tested multiple configurations and the trailing stop systems always resulted in lower profits over the longer time periods.

What’s also surprising is that adding the trailing stops didn’t reduce drawdown to any significant level. On the longer test the standard trailing stop reduced drawdown by just 0.18%. But this came at the expense of a 22% drop in profits. The trailing stop with cap and condition increased drawdown slightly by 0.03% but resulted in a 15% reduction in profits.

We also expected the trailing stop to work better with the trend follower as this is its natural territory. But the results were virtually the same with both strategies.

With the standard trailing stop the trail point was set a certain distance below (or above for short) the current price level. The trail point was initiated as soon as the profit reached 0.3% – (averages 45 pips on GBP/USD or 35 pips on EUR/USD).

The trail point was adjusted only once per interval (5-minute period). With the “non-trailing stop” strategy we used a fixed stop loss/take profit with these points being set at +/-0.9% and +/-0.3% respectively.

This system added a profit cap above (below for shorts) the current price level. The trail level and cap was re-adjusted just once per time interval (5-minute bar). The trade exited if either the profit point or the trailing stop point was reached during the interval. This modifies the standard trailing stop system (above) where the trade will only exit when the stop loss is reached.

Trailing stop with cap and condition

For example with a 10 pip trigger the price needed to move at least 10 pips (up or down depending on trade side) between the previous two bars. 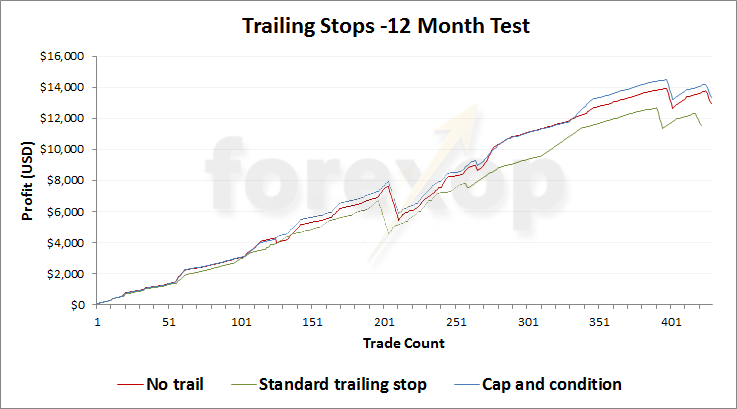 In the longer duration tests we ran the strategies over a ten-year time frame. The results below summarize the highest achieved profits using the standard trailing stop and modified trailing stop system.

On the longer tests neither the standard nor the modified trailing stop system reduced drawdown to any significant level. This was the accumulative effect of the running profits being lower compared to the vanilla strategy. 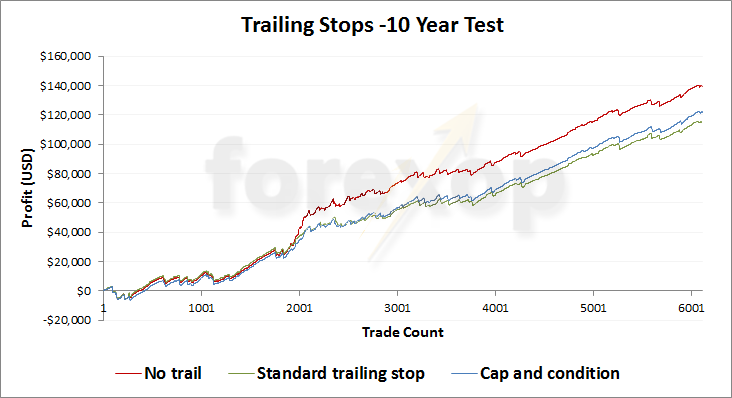 Are Trailing Stops Worth Using?

What we found in our tests was as follows:

The key point to note about trailing stops is that “locking in a minimum profit” always comes at the expense of a slight reduction in profit on each trade.

It is true that letting profits run, as trailing stops do, increases the odds of a few big wins. But over the long term the lower profit average on each trade becomes significant. This cumulative effect is most noticeable with high frequency trading strategies.

So are trailing stops worth using? There may be other strategies that work better with trailing stops. For example where the trailing stop results in trades being held open much longer and as such this could lower trading costs. This hasn’t been tested here.

There may also be the case for using them for manual trades where discretionary input of the trader is available.