Trading on divergences and convergences between related markets can produce profitable trades with very high success rates. Strategies that exploit relationships between markets are a favored play of the institutional trader. 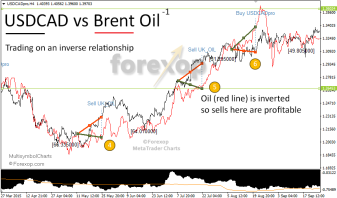 Yet intermarket analysis as it’s called is a missed opportunity in my view. Many traders ignore the subject almost entirely, preferring to focus on one market at a time. So those open to learning about this method can certainly gain an advantage.

What is Intermarket Analysis?

Financial markets don’t exist in isolation. Many have fairly predictable inter relationships with each other. Intermarket analysis is the study of these interactions.

The table below shows some relationships.

The list above is not exhaustive by any means but gives an idea of the many relationships that exist. In this post I want to look at the practical side this subject.

What I will show is how just a basic knowledge of these interactions can produce a reliable trading system. With this, trade signals can be predicted with a good degree of certainty; much higher for example than those produced by basic technical indicators that look at a single market.

Where one market follows the other, there is often a delay where a move in the leader market is not fully-priced into the follower. This is because the fundamentals often take time to catch up.

Intermarket divergence shouldn’t be confused with oscillator divergence which is a completely separate strategy.

Let’s take a practical example. We know that currencies like the Canadian dollar and the Australian dollar tend to move in the same direction as industrial metals and other commodities. And the rise of commodity prices tends to push up interest rates in those countries. Thus the fundamentals in those economies will need at some point to adjust to higher commodity prices.

In the following sections I’ll show practical examples of a) how to spot the relationships, and b) how to trade when these situations occur.

The basic rules for this strategy are as follows:

Step 1 is easy. You can use our free correlation indicator to check for relationships. For step 2 use our chart overlay indicator to look at the two markets side by side to get a feel for how they move together. This indicator will synchronize the chart and it will be much easier to examine the relationship.

Look closely at the periods of divergence. If the divergences are significant it’s also helpful to look at any news events that are happening during that period to understand probable causes for the markets deviating from one another.

What do I mean by weaker market? When you have a correlation between two markets, often there is a direction of causality. What that means is that one market tends to lead and the other follows.

The following four examples demonstrate how this strategy works.

The Australian dollar correlates highly with certain commodities futures. The yen meanwhile tends to be the opposite. In this example I am charting the relationship between platinum and AUDJPY. The longer term correlation with platinum and AUD is fairly strong and is usually above 0.7. Positive correlation means both markets tend to move in the same direction at the same time.

The figure below shows the two markets plotted on the four hour chart. The lower section shows the long period and short period correlation for this scale. The dark solid graph is the short period and this is clearly cyclical. These rises and dips create good opportunities for divergence trades. Click the chart to see an expanded view.

In the above I am using an automated divergence indicator to identify the trade entries using the method above. The trades are marked with the red and orange lines and occur at points where the two markets split from one another.

As can be seen all of the divergences create very profitable trading opportunities.

For example trades 2, 3, 4 and 5 marked on the chart are sell signals on AUDJPY. These all precede fairly heavy bear market selling. The signal from the indicator often occurs just before the trend reverses in a big way.

These pairs have a strong an inverse relationship. When one goes up the other goes down. This means their correlation is negative. The reason for this is that both AUD and CAD tend to move in the direction rising commodity prices, while USD and JPY tend to do the opposite.

In the above chart I’ve inverted AUDJPY to give a better sight of the relationship. In other words it is JPYAUD. As can be seen from Figure 2 there’s a very close relationship between these two markets. USDCAD and AUDJPY have a monthly correlation of -0.67 at the present time as Figure 3 shows.

If you look at Figure 2 above, you can see at 3 that JPYAUD (red line) starts to diverge from USDCAD (black line). This was due to some weak economic data affecting the Australian dollar. Following this period we see some overshoot as JPYAUD strengthens, possibly beyond fair value (see overshoot at 4).

Alternatively, point 5 presents a less risky choice because here the market corrects lower and undershoots. At this point I can long JPYAUD. As the graph shows the markets do indeed converge again later and the buy (or sell on AUDJPY) yields a good profit.

Figure 4 below shows this trade sequence. 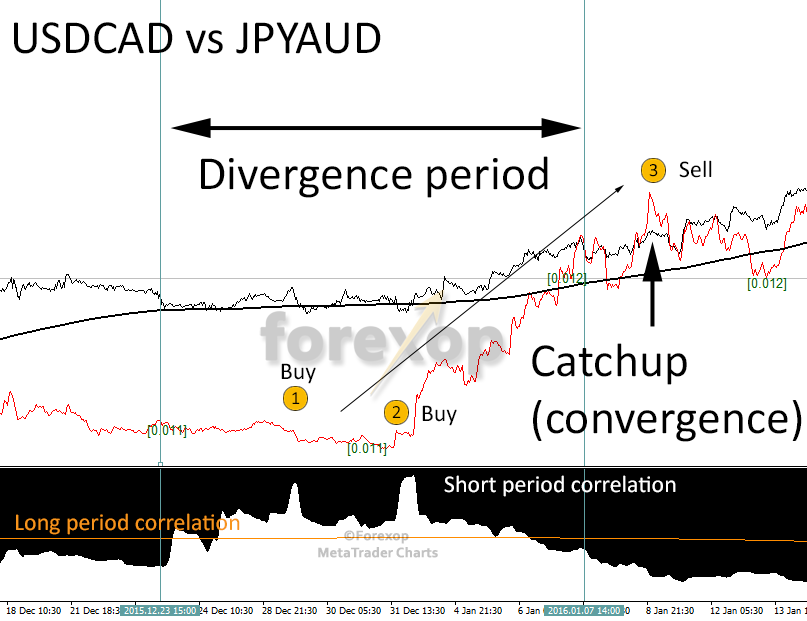 The trades are therefore:

Copper has a monthly correlation with the FTSE-100 of 0.78. The markets follow each other on a macro level. This is due to the heavy weighting of miners in the UK’s main share index. When the price of industrial metals like copper rises, this tends to be in line with the rise of mining shares on the FTSE. Likewise drops in the value of copper decrease the earnings of miners and the shares nosedive.

On the short term, hourly and daily correlation is usually much looser because both markets have very different dynamics. This is where profitable trading situations arise.

The chart below shows the relationship over a one year period.

The trade recommendations in Figure 5 are generated automatically by the divergence indicator using the rules above.

In the periods of divergence the short-term correlation generally falls clear below the historical monthly average. Notice that in some periods the correlation even reverses. You can see this clearly in Figure 6.

Out of the 10 trades shown, all yield a substantial profit where the trading rule is followed. The average profit was more than 300 pips per trade. 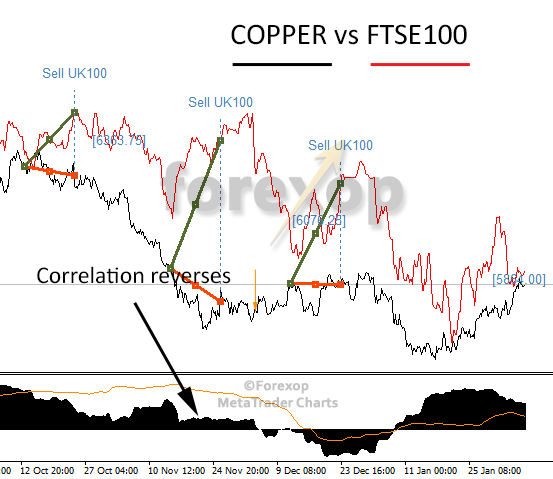 As I said above, Canada’s economy is dependent on oil and gas production. Therefore it’s not surprising that its currency rises and falls in tandem with crude oil prices. The chart below plots the price of US dollars against Brent crude and USDCAD (US dollar against Canadian dollar).

In this example there are three individual markets to consider: Brent oil, US dollar and the Canadian dollar. I have flipped the price chart for Brent crude (UK Oil) because there is an inverse relationship with USDCAD. In other words, falling oil prices are usually accompanied by rises in USDCAD, all other things being equal.

The monthly correlation of the two markets is typically around -0.8.

As the chart is inverted, sells of UK Oil are profitable when the red line rises. The actual chart is shown in the small box in Figure 7. 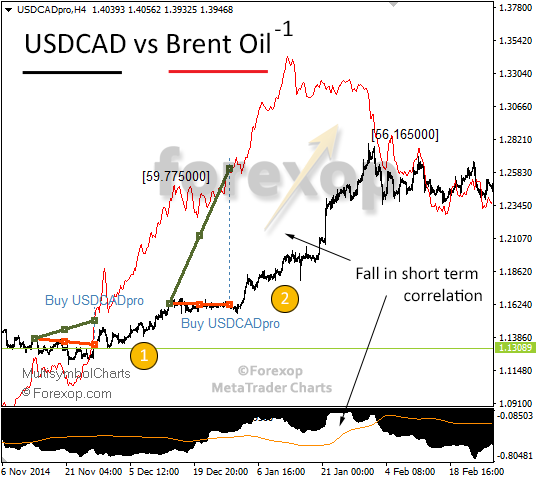 Looking at the chart section in Figure 8, the signal initially generates trades 1 and 2. These turn out to be decent trade openings for buying USDCAD. Here you can see a clear separation between the markets as Brent oil-1 (red line) rises rapidly but USDCAD fails to catch up at this point.

The trades are as follows:

Note that the indicator window shows contracting near term correlation. This confirms that the markets are temporarily separating (diverging) from one another which here is easily seen by looking at the chart. 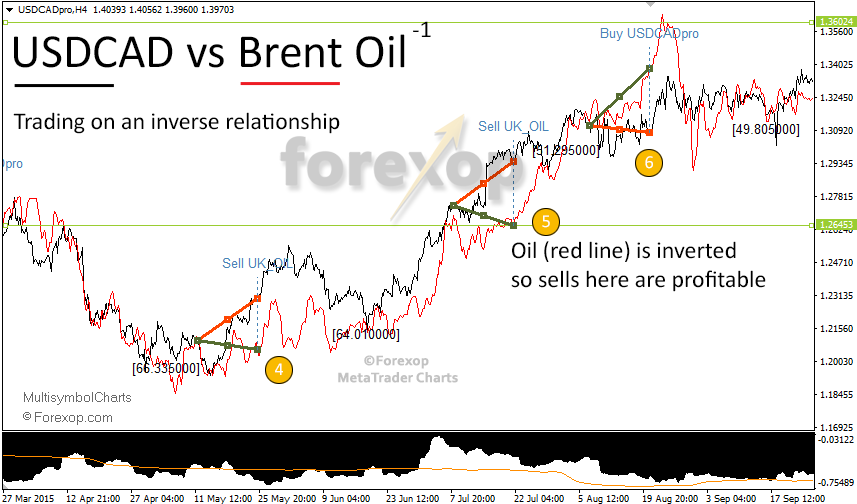 Trade entries 4, 5 and 6 also produce respectable profits. Trades 4 and 5 sell UK Oil and trade 6 buys USDCAD. The table below shows the entry and exit points for each trade.

In this article I’ve demonstrated a system for trading divergences between two related markets.

Markets are more connected than ever, and there are plenty to choose from to apply this strategy effectively.

In my experience this strategy works best on longer time frames; I typically use the four hourly or daily charts to do the analysis. I find that below this there is usually too much noise; the correlation measures at shorter time frames are often unpredictable.

As I’ve shown, the trading rules are fairly simple and can be done with a few basic indicators or even just by sight. In the above I’ve used the following tools: