Home Technical Analysis Harmonics
Most of the technical chart patterns like heads and shoulders, double tops, triangles and so on are defined mainly by their appearance. In another branch of chart analysis called harmonics the patterns are recognized by the exact retracements ratios between each reversal. 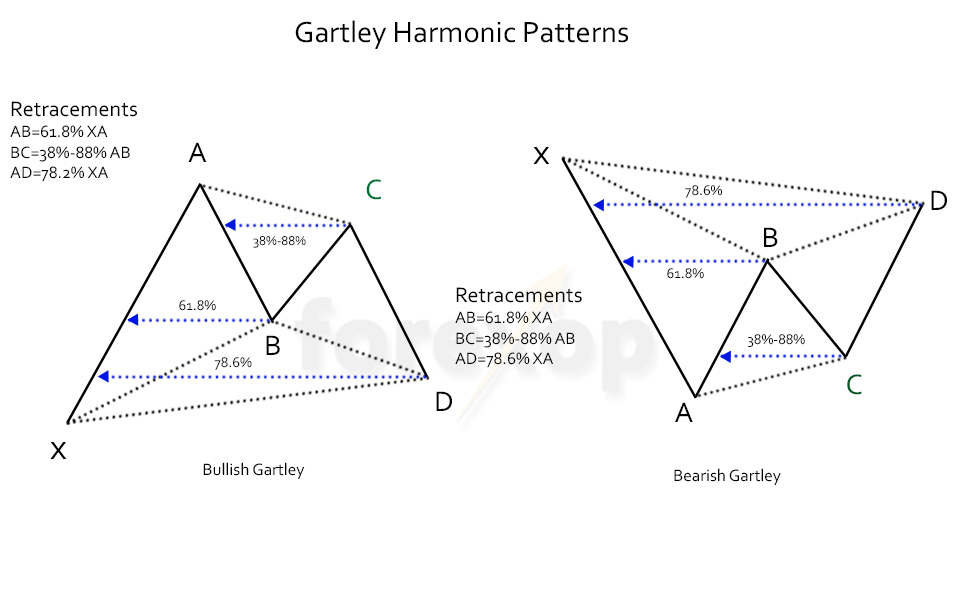 Once known the harmonic patterns can be used to predict new price targets when the price breaks out of the pattern. The predictability of these patterns makes them popular among technical traders or harmonic traders as they are called.

The five point harmonics are known as XABCD patterns. The ratios of each swing will tell the harmonic trader which pattern it is, and the appropriate trading rule. The ratios for harmonic patterns are based on Fibonacci number sequences.

The first of the XABCD patterns is known as the Gartley. 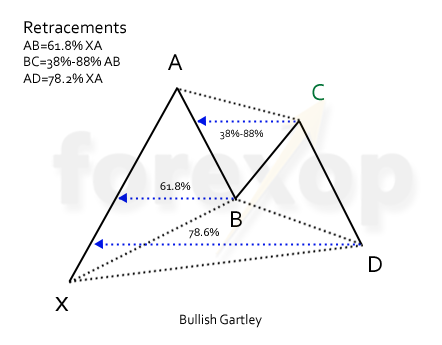 All harmonic patterns are classified by the ratios that each retracement makes against a previous move. In Figure 1, line XA is the first move of the pattern and then AB is its first retracement.

To classify a pattern some ratios are allowed to be in a range while others should be close to the exact ratio.

A bullish Gartley should have the following retracement ratios:

The last wave that completes the pattern to D should retrace 78.6% of the initial move from X to A. This is important since it defines a rising slope from X to D, start to finish.

The main points in the Gartley pattern are X, A and D. Most harmonic traders classify a pattern as a Gartley as long as the points at B and C lie somewhere between A and D on the price axis. But if the retracement at AB is more than 62%, the pattern could classify as a bullish butterfly.

With all harmonic patterns, there is some tolerance given around the ratios between times and prices. On real charts, the ratios will seldom be exact.

The bullish Gartley predicts a rising market and it has a price target that’s above D. The exact range of the target is between 62% and 127% of the retracement from XA. For example if X is at 100 and A is at 120 this makes a range for the price somewhere between 116.8 and 129.8 after the exit point D.

A bullish Gartley can be traded at completion by placing a buy order at point D, and ideally when there are some other confirmations of an upside breakout. The take profit is set within the target range and the stop loss is set below point X.

If the price does fall below X the least risky course is to exit the position and await a better entry.

If confident that the Gartley pattern is forming a trader could try to pre-empt the completion of the pattern at point C, and place a sell order in anticipation of a bearish move from C to D.

The bearish Gartley is the mirror image. It resembles a deformed letter “W”.  The orientation from X to D should be downwards. The ratios are the same as the bullish pattern. With the bearish Gartley again the critical points to look at are X, A and D. The points B and C should lie somewhere between A and D on the price axis. However if B retraces more than 62% of the move XA the pattern could form a bearish butterfly.

To trade a bearish Gartley, first wait for completion at D and look for a confirmation of a downside breakout. Then place a sell order with take profit in the range 62% to 127% of XA. The stop loss can be placed above point X.

If the market rises above X then the safest action is to exit the position and wait for a more suitable entry.

Like the bullish Gartley, another trading strategy is to anticipate the move from C to D and place an order to buy. The take profit is then set at D and the stop loss is set around A.

The other XABCD patterns are the butterfly, the bat, cypher, and the crab.

Again there are a set of ratios that hold between each of the retracements. 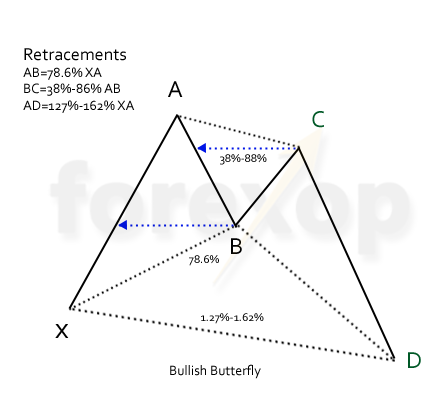 The most significant parts of the butterfly are the retracements from A to B and A to D. As with a Gartley, the reversal at C is flexible but it should lie between A and B and not be either above or below. The retracement to D can lie in a range anywhere between 127% and 161% of the move from XA.

This is calculated as:

How useful are Harmonic Patterns?

Harmonic chart analysis is relatively new compared to candlestick charting and other forms of technical analysis. Unlike regular chart analysis, the harmonic trader does have to make some careful measurements to recognize each case and to determine the price targets.

Measuring out the lengths is much easier done with charting software than by hand. It’s also less prone to error.

One of the merits of harmonic trading is that the patterns have target price ranges and that is useful for knowing when to take profits.