Home News
If you’ve been watching stock markets lately you’ll know that since the beginning of the year the banking sector has had a pretty rough time. We’ve seen some banks lose as much as fifty percent of their value over that period. 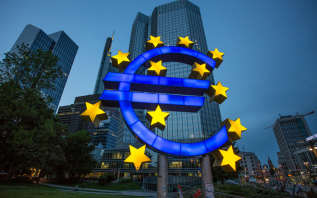 Europe's banking sector: A new crisis in the making? © forexop

So why are investors punishing this sector so hard?

For one thing there’s the weight of banks’ bad debts. Then there’s the uncertain macro-economic environment in which we currently find ourselves. Low interest rates are reducing profitability and threatening the very solvency of some banks.

But none of this is particularly new. So why haven’t the banks put their houses in order yet?

Why are the Banks Under Threat?

The extremely low interest rates that we see in Europe and elsewhere make it much harder for banks to earn profits in their core business areas.

• First, the flattening of the yield curve affects the banks’ net interest margin.

By playing on this rate differential between short-term and long-term – the yield curve – the banks make money. They transform their short-term deposits into long-term loans at a higher rate. Turning deposits into loans is one of the key tools banks use to create low risk profits.

But this business model is under threat. We are now seeing a prolonged period of ultra-accommodative monetary policy.

Mario Draghi’s monetary stimulus means the spread between long and short loans has been sharply tightened: this is good news for borrowers, but not so much for the banks.

• Secondly, many borrowers have renegotiated their loans in recent years. This reduces the average return of all loans.

To maintain the same performance levels as in the past, banks have been forced to invest in riskier assets with longer maturities. This development has worried their shareholders.

IMF: European Banks Need to Adjust to the “New Normal”

Last week, the IMF warned about the dangers hanging over the European banking sector in general.

Of the European banks under surveillance, two names keep getting mentioned:

Banca Monte dei Paschi di Siena is the oldest bank in the world still in operation and the third largest bank in Italy.

Deutsche Bank is the largest German bank and a heavyweight in the European banking sector. But it is perceived to be one of the weakest banks in Europe and its stock has been hammered by the latest uncertainty.

The weak finances of most European countries mean they would be less able to withstand the shock of a full blown banking crisis and the subsequent bailouts that may be required.

And as if the problems of very low interest rates and weak growth weren’t enough, there are also the lingering consequences of the subprime crisis.

In fact, many banks still have significant bad debts. That is to say loans that may never be repaid. In addition some banks need to pay more fines for their responsibility in the crisis.

This is precisely the case of Deutsche Bank. Also worrying investors is that they’ve stepped up high risk investments and could lose everything if economic and financial panic were to increase. Its stock value fell more than 40% since the beginning of the year, after a year that ended with a loss of 7 billion euros (2015).

Deutsche Bank is also knee-deep in more than its fair share of scandals, and faces now nearly 8,000 court disputes.

In mid-September, the American Department of Justice fined the bank $14 billion. The bank is accountable for its role in the “subprime” scandal in 2007, causing the financial crisis of 2008. The fear that the bank will not be able to pay the fine has weighed heavily on the share price.

But Deutsche Bank is essential for the functioning of the first European economic power: bankruptcy could cripple much of the economic activity in Germany. The IMF said that “Deutsche Bank poses greatest risk to the global financial system” because of its interdependence with many worldwide companies.

Is Deutsche Bank the Next Lehman Brothers?

If Deutsche Bank were to fail, then the whole banking sector would be affected. By extension the whole financial sector, the European economy and the global economy. Are we thus heading towards another crisis like Lehman Brothers?

The volatility of Deutsche Bank’s share price clearly shows investors’ concerns about the strength of the company and its ability to pay their numerous fines. On Friday the 30th of September, several hedge funds withdrew their capital from Deutsche Bank.

This of course sent a negative signal to shareholders and the stock lost up to 8% (reaching a historical low of 9.90 euros), before bouncing back on the possibility of an American fine well below the original amount.

This plunge of the stock also sent other securities of the banking sector heavily in the red. This massive withdrawal scenario by hedge funds echoes the scenario that accelerated the collapse of Lehman Brothers and caused the greatest recession of the 21st century.

According to some economists, there is no evidence today that suggests that Deutsche Bank would have such significant balance problems as to equal those of Lehman Brothers in 2008.

Deutsche Bank appears to have far greater reserves than those of Lehman Brothers at that time. We must also take into account the numerous protective measures that have been in place since the financial crisis, which have strengthened the global financial and banking system.

For others however, fragilities remain, particularly in the European financial system. Some reforms in Europe wouldn’t have gone in the right direction or not far enough. The financial system’s resilience to a new shock may not be as strong as we think.

The weak finances of most European countries mean they would be less able to withstand the shock of a full blown banking crisis and the subsequent bailouts that may be required.

Bond prices are suffering as well

Investors increasingly worry about the ability of Deutsche Bank to repay its “Cocos” -Contingent Convertible, or contingent convertible bonds.

The Financial Times defines CoCos as “…designed to convert into shares if a pre-set trigger is breached in order to provide a shock boost to capital levels and reassure investors more generally.”

The Basel III rules stipulate that banks must hold a conservation buffer to be able to absorb any losses. The goal is to avoid a new financial and banking crisis.

This is all about strengthening the level and the quality of capital in order for banks to be better protected in case of significant losses, with: a minimum requirement of capital with Tier 1 = core capital and retained earnings, and Tier 2 = Tier 1 + supplementary capital or provisions = 8%, and an increase in the ratio of Core Tier 1 = 4.5% + a conservation buffer = 2.5%, hence a total of 7%.

It is thus possible to meet – in part – the new capital requirement. The main feature of a CoCo is its ability to absorb losses: it’s a subordinated loan. Depending on specific trigger criteria (such as a deterioration of the common equity ratio below 7%), either CoCo bonds are to be converted into shares, or they suffer a partial or total loss in their nominal value.

The risk is borne by subscribers and investors, who should be very careful about the solvency of the financial institution issuing the CoCos.

Every crisis brings both risks and opportunities.

The risks around the banking sector are certainly going to last for a while, as banks operate in an environment of low interest rates and weak global growth. Traditional investments are less suitable to this environment and less profitable for banks.

Worldwide central banks do not seem to be in a hurry to normalize their monetary policies, so interest rates should stay low or negative for a while longer.

Banks are taking more and more risks to increase their profits, but they are at the same time more and more regulated and monitored. Nearly 10 years after the 2007 financial crisis, banks like Deutsche Bank are still paying fines due to their involvement in this crisis, which is raising concerns among investors, economists and politicians regarding its solvency.