Home News
The Beige Book, published yesterday by the US Federal Reserve (FED), shows “modest” or “moderate” American economy expansion in July and August in most of the 12 districts. 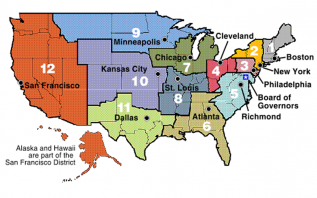 Most districts have forecast that the US economy will continue to grow at a “moderate pace” in the coming months.

“Wage growth ranged from flat to strong across the Districts, but most reported that wage pressures remained fairly modest”. Even though most of the districts saw an increase in wages and a tightening of the labour market, inflation pressures remain low.

Low wage growth is a major obstacle in the path of raising interest rates. Despite a labour market close to full employment in the United States, economists still have not found a widespread increase in wages, which suggests that the FOMC will not raise interest rates during their next meeting on the 20-21st of September.

Remember that the FED has been given a dual mandate of price stability (inflation around 2%) and maximum employment (unemployment rate at 4.9%). While the later has more or less been reached, inflation is far from its target and has been below 2% for about 4 years now…

What is the Beige Book?

The FED releases its Beige Book eight times a year. Its purpose is to gather information on the economic conditions in each of the twelve areas (or “districts”) of the United States by industry, ranging from agriculture and natural resources to employment.

This report is available to the public two weeks before the meetings of US Monetary Policy Committee (FOMC) and is used as the basis of the FED’s rates decision path. Two other books are also used for a better understanding of the economic and financial environment of the United States, though these are not available to the public immediately – the Green Book and the Blue Book.

The Green Book, otherwise entitled “Current Economic and Financial Conditions”, includes detailed analyzes of the US and international economies. It is produced by the Board of Governors and distributed to the members who participate in FOMC meetings six days before the date of the meeting.

The Blue Book, entitled “Monetary Policy Alternatives,” describes the context, circumstances and consequences of the application of alternative monetary policy that might be considered during future FOMC meetings. The report, also written by the Board of Governors, is usually distributed one day after the Green Book.